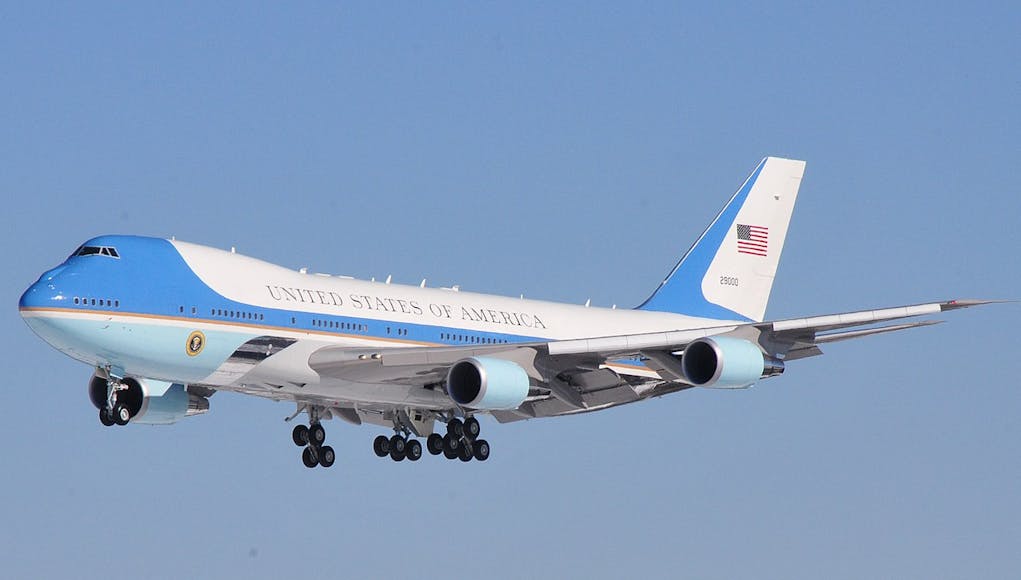 Plans are underway for a Royal Air Force pilot to report to 89th Airlift Wing, Andrews Air Force Base for conversion training in order to fly the Boeing VC-25.

The Daily Express quoted an anonymous source as saying that the “Wing Commander chosen for this job has previously served a number of years in the U.S. as an so is well acquainted with how the US Air Force operates”.

You can read ‘RAF pilot is to become first non-American to fly Air Force One as relations cemented‘ by Marco Giannangeli here.

RAF pilots have previously flown, co-piloted and crewed US aircraft including the F-117, U2 and B2 Spirit stealth bomber.

According to the White House:

“Inside, the President and his travel companions enjoy 4,000 square feet of floor space on three levels, including an extensive suite for the President that features a large office, lavatory, and conference room. Air Force One includes a medical suite that can function as an operating room, and a doctor is permanently on board. The plane’s two food preparation galleys can feed 100 people at a time.

Air Force One also has quarters for those who accompany the President, including senior advisors, Secret Service officers, traveling press, and other guests. Several cargo planes typically fly ahead of Air Force One to provide the President with services needed in remote locations. Although ‘Air Force One’ can describe any Air Force aircraft carrying the President, it is now standard practice to use the term to refer to specific planes equipped to transport the Commander-in-Chief.”

The U.S. Air Force recently announced that it will replace the two 747-200s that serve as the presidential Air Force One fleet with two new 747-8s.

Interesting article. I’m more curious about an RAF pilot flying an F117. Is this all in aid of exchanging training and information?

Hi BB85, Simple answer to your question is yes. Giving allied aircrew or any service personnel, tours on different capabilities or allied forces gives interoperability a real boost. It also helps when it comes to developing or reintroducing capabilities into an ally’s forces structure. A la Carrier Strike into the RN… I remember talking to an RAF officer about secondments when I was still working in defence procurement. There was a lot of cache attached to secondments across all the services. I also seem to remember there was a considerable waiting list of USAF pilots trying to get on the… Read more »

It goes on across all three services. Back in the day I was in a Leander frigate and we had an American navigator for about 18 months on exchange. And I believe the USS Winston Churchill, a destroyer, always has a Brit on board.

That was before I discovered this website!
Cheers. N

The special relationship in action. 🇺🇲🇬🇧

Absolutely. Which will remain, no matter what certain people on the left claim/ wish for. Nick Clegg is at it already.

The SR goes deeper than the personality of Biden vs Johnson and whether he’s an Irish American or from the Moon.

True. The SR is different to the politics of Washington and a president who wants to hit the ground running and get a quick win by resolving the Irish issue over breakfast. The Irish issue & Brexit might cause an initial falling out but there are plenty of areas everyone can agree on. The SR will endure.

Hi Robert, Makes me smile when I read the UK press hand wringing about what is likely to happen whenever there is a new US President or UK Prime Minister. I was never involved in the trans Atlantic relationship stuff myself but plenty of my collegues were often off on a trip to the US. The ‘special’ relationship is way more than just the two at the top. Frankily, even if the two at the top didn’t get on those lower down the chain would still get on with their jobs and keep their fingers crossed for the next one’s… Read more »

It happens every time there’s a new Democrat president. I think when Obama won his first election Germany was going to be their new best friend. Then it was France. Just infantile, superficial drivel from the media.

“Infantile, superficial drivel” – very succinctly put. I like it 🙂

Often disparagingly viewed in terms of the relative power of both countries, but in fact coalesces around intelligence and security services joined at the hip.

Yep, and add Aus, Can, NZ to that, though the closest areas are between NSA GCHQ and CIA SIS.

UK out of EU intelligence sharing? Its a shame. We are a part of something much much bigger.

Indeed, Daniel……and some at least within the organisations on both sides of the pond apparently credit the British setup overall the more reactive.
Mentioning Five Eyes in passing, though, I’d quite like to see us move back towards the Trans Pacific Partnership under Biden, if at all possible, as more in line with our view of a trade relationship based upon mutual respect rather than political centralisation. The Five Buys? – and the rest!

Imagine being so petty …. or so filled with hubris …. that you risk a failure of security by cutting off your (probably most competent) ally (UK) just because you can’t let us have our own sovereignty without having political and legal interference. EU stupidity of the highest order. Separate the issues, you idiots. We happily can!

Exchange posting across all services have been going on for many decades. There is an interesting YouTube channel called Aircrew Interview that periodically interviews RAF and Allied pilots about their exchange posting and experiences. Having a RAF pilot posted to 89th Airlift Wing to fly the VC-25 is somewhat unexpected though. Will be interesting if he/she gets to actually fly the US President.

I would have thought everyone working on Air Force One, from pilots to galley crew, would have a TS security clearance – and such clearances to be restricted to US nationals. As you say, John, this is rather unexpected, for a non-US national. But hey – the special relationship works at all levels.

Boeing is … or has … stopping production of the 747. What will they replace the next Airforce One with, the one after the new one they are building?

A contract has been awarded by the government for a preliminary study into a supersonic VIP plane.

Two U2 aircraft were temp transferred to the RAF in 1961 after the US undertook not to overfly the USSR after one was shot down in May 1960. RAF crewed.

Hope they give the VC 25 fleet a good disinfection once the fascist super spreader is hauled off.

Now now, no need to be like it. Trump might not be everyone’s cup of tea but super spreader’s a bit strong and without evidence, a bit like his claims of electoral fraud.

Well his chief of staff has it and six other staffers. Anyway his disregard for democratic values and his dismissal of the election result does make him a fascist.

Please review the definition of “fascist.” Dismissing election results is not part of it.

David maybe you should look it up. Instead of trying to defend the indefensible.

I always find the worst fascists are those pretending to be anti-fascists of the left. Those people are so cancel culture, so intolerant and anti-semite it’s sad that many people do not understand how so. The left have always been as bad, if not worse, than the right. My daughter was a member, for a while at uni, she was so aghast at the intolerant and racist, aggressive and abusive sub culture she had to leave. Extreme left, extreme right, cheeks of the same arsehole.

Well said mate. Spot on! Intolerance is not the preserve of the right.

I agree, cancel culture is a ridiculous movement. However, just because the looney left exists, it doesn’t mean that Trumps current actions of voter suppression and ignoring the democratic result are noting but the actions of a facist.

Trump the chump has just sacked his defence secretary……the man is both brainless and vindictive. Yet 70 million voted for him….

You might want to pause for a moment and consider that. Are there 70 million fascists in America or has he done things that are good for people who want more of that good? Many of them Black and Latino’s by the way.

As someone who hates Fascism I guess saying the above makes me a fascist too. Pretty low bar for that insult these days. A bit like calling a lefty Lib-Dem a Marxist. Same crazy misuse.

Well said, I’m a racist facist knuckle dragging nationalist apparently. For campaigning for Brexit in 2015/16. I’ve been called that both out on the streets and on UKDJ.

Yet these people actually know sod all about me.

Intolerance is the frightening face of politics that, if unchecked, is undermining our democracy and in the worst case leads to conflict. It starts on the streets or online these days and escalates.

Interestingly, there is one country that appears to be bucking the trend for the moment. New Zealand. The recent election saw populist politics roundly rejected. Apparently New Zealand has one significant advantage – News Corp has NOT gained a foothold in the country. Of course, they do have to contend with social media fake news like the rest of us…