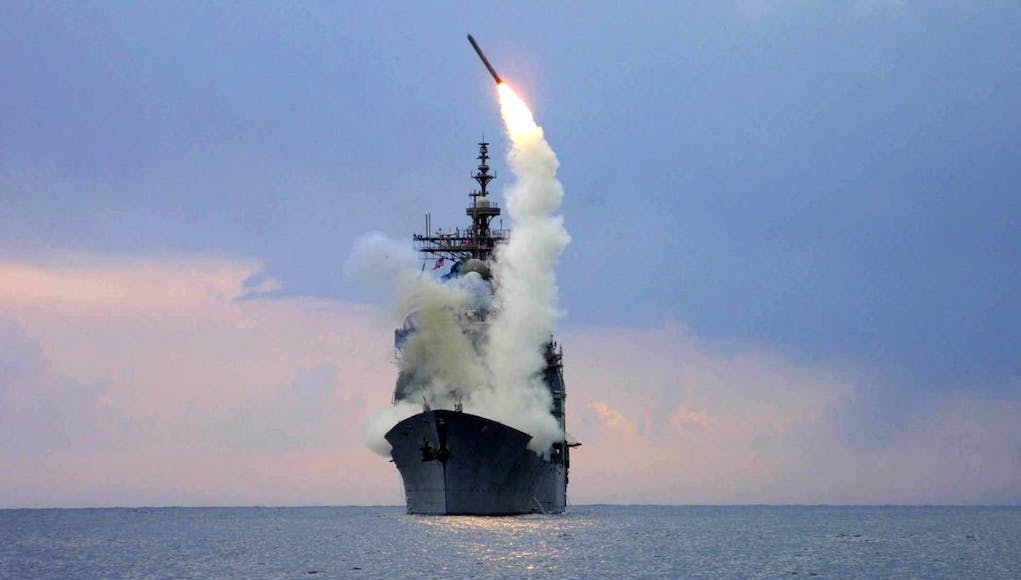 The US Navy has awarded Raytheon a $349 million contract for Phase 2 of the Maritime Strike Tomahawk Rapid Deployment Capability, which will follow Phase 1 design and integration efforts as well as test and evaluation.

Work under the contract will be completed in February 2023.

The US Navy is currently recertifying its existing inventory of Tomahawk Block IV missiles, which involves modifying the weapons into the modernised Block V configuration.

The Tomahawk recertification process involves extending the life of some 3,790 missiles by 15 years. A number of missiles will also be upgraded to the Block Va Maritime Strike Tomahawk or Block Vb Joint Multiple Effects Warhead System configuration.

The US Navy previously utilised Tomahawk anti-ship missiles during the Cold War, but the weapons were ultimately taken out of service following the collapse of the Soviet Union.

Will UK Tomahawks be upgraded as well?

When their TLAMs are due for recertification they will probably get some of the updates to Block V but I haven’t heard anything about the Brits wanting an anti ship capability to their TLAMs. Might have something to do with Britain only having them on their subs and not surface ships.

Thanks for that…whilst it all to do with money, I have never quite understood why you would not want to maximise your assets. Tomahawks are a huge asset, in anybody’s navy!

i’d hope so, seeing as most conflict begin these days with a sea launched barrage of long range stand off missiles, i’ve long believed that all royal navy ships should be modernised to carry tomahawk.

We have somewhere between 50 and 60 missiles total, we don’t have enough to fit to other vessels. Upgrading to have capability when we don’t have the missiles is a waste of funds better spent on more urgent needs.

Yeah like actuall ships and submarines. But wouldn’t anti ship/land tomahawk fill lots if capabilitys for our frigates and destroyers, if we get the mk 41 on them all.

I’m no expert but I understand the mk41 is effectively a launch platform/silo and there is a lot more involved with integrating a weapon than just having the silo.

I am curious what the US sees as the advantages of the thomahawk over say harpoon. I am guessing it’s just a question of saturating the enemy air defence with many missiles that some get through, but that comes back to numbers of actual missiles available.

NSM would be much better then Harpoon as ASM.

I agree. The USN does as well as they are procuring and deploying them in the LCS fleet for ASM capability. The LRASM in testing now will be the really long range stealth PLAN buster. A LAM version already exists.

@Helions
I very much think the RN would get better value to have VLS Astutes, to be use for land attack operations.
And to have FC/ASW to as future deterrent.

Totally agree with You!

Our Tomahawks are the sub launched variant, but we could really do with putting them on our Surface ships.Type 26 will have Mk41 VLS, hoping Babcock Arrowhead will also have them.and could be retro-fitted to Tyoe 45

A Tomahawk cruise missile is Not stealthy, so a lot of them need to be fired for some of them to get through air defenses. Only the USN can afford to fire dozens of Tomahawks at a time. The RN only has them on subs, most likely to be fire Unexpectedly, doing it a very sneakily way! If RN had them on warships, our adversaries would prepare their air defenses ready every time a UK vessel appeared offshore, making it very costly to fire lots of them. That is the propose of the development of FC/ASW for a future strike… Read more »

As we’ve seen in the Gulf targets are not always military. Denying the ability to resupply via commercial shipping was tactic used in WWII so suspect it would be used in any future conflict. As you say its not stealthy and slow, no terrain to mask it out at sea. It does have fantastic range. and against lightly armed vessels it would be useful.

It’s about time the RN surface ships and in particular what we call “destroyers” had a credible LAM capability. I seem to recall in the original designs that was the plan but it got budgeted down to being an air defence role with a view to LAM’s being added at a later date. Cruise has been a first strike weapon in almost every major conflict since Kuwait. Even the Russians used it in Syria. It seems nonsensical that in these turbulent times a premier naval force ( in Europe at least) does not have the option at it’s disposal.

I wouldn’t argue with any of that!

Typical British procurement – FFBNW should actually mean ‘Fitted For But NEVER With’ – i.e. done on the cheap. For example, the Type 45s will never see Mk41 VLS, which is a real shame as I wholeheartedly agree with the sentiment on this site that we need to maximise the FULL potential of the precious few hulls we have. I’m amazed at just how under-armed our ships are compared to our peers and increasingly – our adversaries! It’s very worrying indeed…..

The RN would be able to afford to Fire Tomahawks ANYWAY!

I meant, Not be able to afford to fire many!

The T45 will NOT be fitted with Mk. 41 VLS, because of reasons that have been discussed and debated on this website.
The T45 has got a VLS it is called Sylver.

@Russjm
I explained in my post above why the RN has Not equipped the destoryers with LAM, have you not comprehended what I said?
Even after latest budget increase in defence spending, there is still a black hole of £10 Billion+,
to be filled for the next few years!
Which means the RN can not afford to fire many missiles!