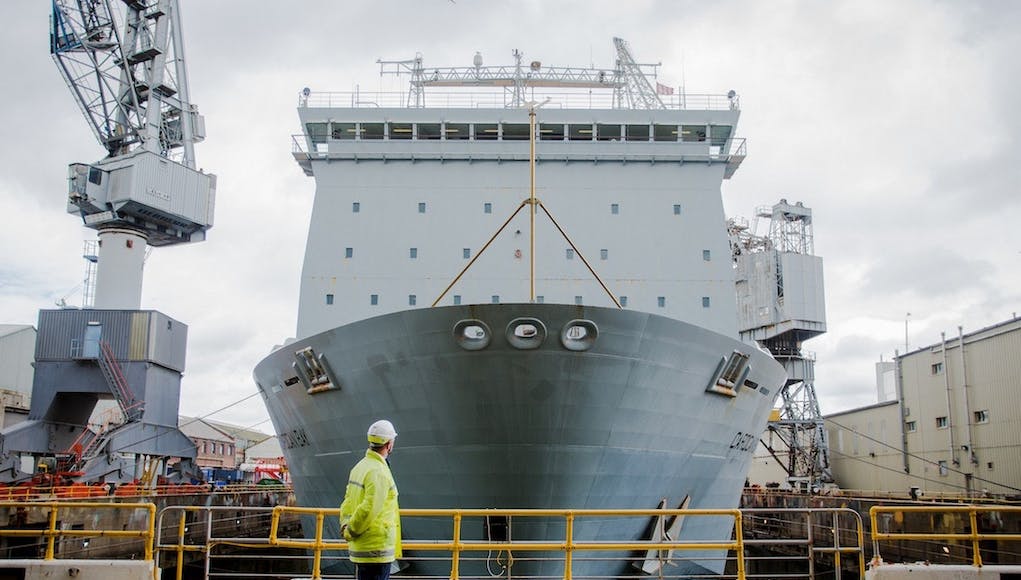 It is understood that A&P Group has spent many months preparing for the vessel’s return.

RFA Cardigan Bay is a Bay class landing ship dock of the Royal Fleet Auxiliary. The Bay class are based on the Dutch-Spanish Royal Schelde Enforcer design and intended as a replacement for the Round Table-class logistics ships.

Since entering service, the Bay class ships have been used for amphibious operations, training of the Iraqi Navy in the Persian Gulf, counter-drug deployments in the Caribbean, and relief operations following the 2010 Haiti earthquake. In 2010, Largs Bay was removed from service as part of the Strategic Defence and Security Review. She was sold to the Royal Australian Navy (RAN) in 2011, who operate her as HMAS Choules.

A&P Group is the largest ship repair and conversion company in the UK, with three shipyards located in Hebburn, Middlesbrough and Falmouth. The Company undertakes a wide variety of maintenance and repair work on commercial and military ships with projects ranging from a two-day alongside repair period through to multimillion UK pound conversion projects lasting for a year or more.

As one of only two remaining significant commercial ship repair companies in the United Kingdom, along with Cammell Laird, A&P Group has become a centre of excellence for ship owners and managers operating in North West Europe and continues to grow a profitable and successful business employing over 1,000 skilled staff in the North East and South West of England.

“The work on the RFA Cardigan Bay secures jobs for 250 A&P personnel including engineers, fabricators, pipefitters, general services, painters and apprentices. We’ll also call on the support of various specialised subcontractors during the refit period, which brings new workers into town and contributes hundreds of thousands pounds to local businesses and hotels.

As well as preparing the dock for the ship’s arrival, we’ve undertaken a tremendous amount of pre-arrival work including scheduling, procurement, security and safety plans. In particular our fabrication and engineering teams have carried out a pre- fabrication package and azimuth thrusters for the last few months prior to the vessels arrival.

It’s also important to reiterate our role in the continued operation of the RFA Cardigan Bay throughout her four years at sea. We’ve sent our teams of engineers overseas to conduct routine maintenance and repairs while the ship was active in some of the world’s most conflict ridden areas. It’s testament to the technical and engineering expertise we have here, and our working relationship with the MOD, that we were able to do this with such success.

It’s a real honour to welcome the RFA Cardigan Bay back into Falmouth.”

We have been informed that the A&P team will also provide the logistical support for RFA Cardigan Bay while she’s in dock, which includes the provision of electricity, water, drainage and fire-fighting services – equal to the needs of an average village.

According to a press release, A&P Group has a contract to maintain and provide global support for a ‘cluster’ of four frontline RFA vessels from its joint A&P/MoD office in Falmouth.