RFA Mounts Bay is ready to respond to hurricanes and tropical storms in the Caribbean, say the Royal Navy.

The ship was used extensively during the 2017 when a series of storms battered British territories in the region, such as the Virgin and Turks and Caicos Islands.

“With the five-month-long Atlantic hurricane season beginning on Saturday, the ship is once again primed to intervene after focusing on drug-busting operations during the winter.

Once again a Wildcat helicopter – 211 Flight from 815 Naval Air Squadron in Yeovilton – and a dedicated Humanitarian and Disaster Relief troop (a combination of 24 Commando Royal Engineers and 17 Port and Maritime Regiment) are embarked.” 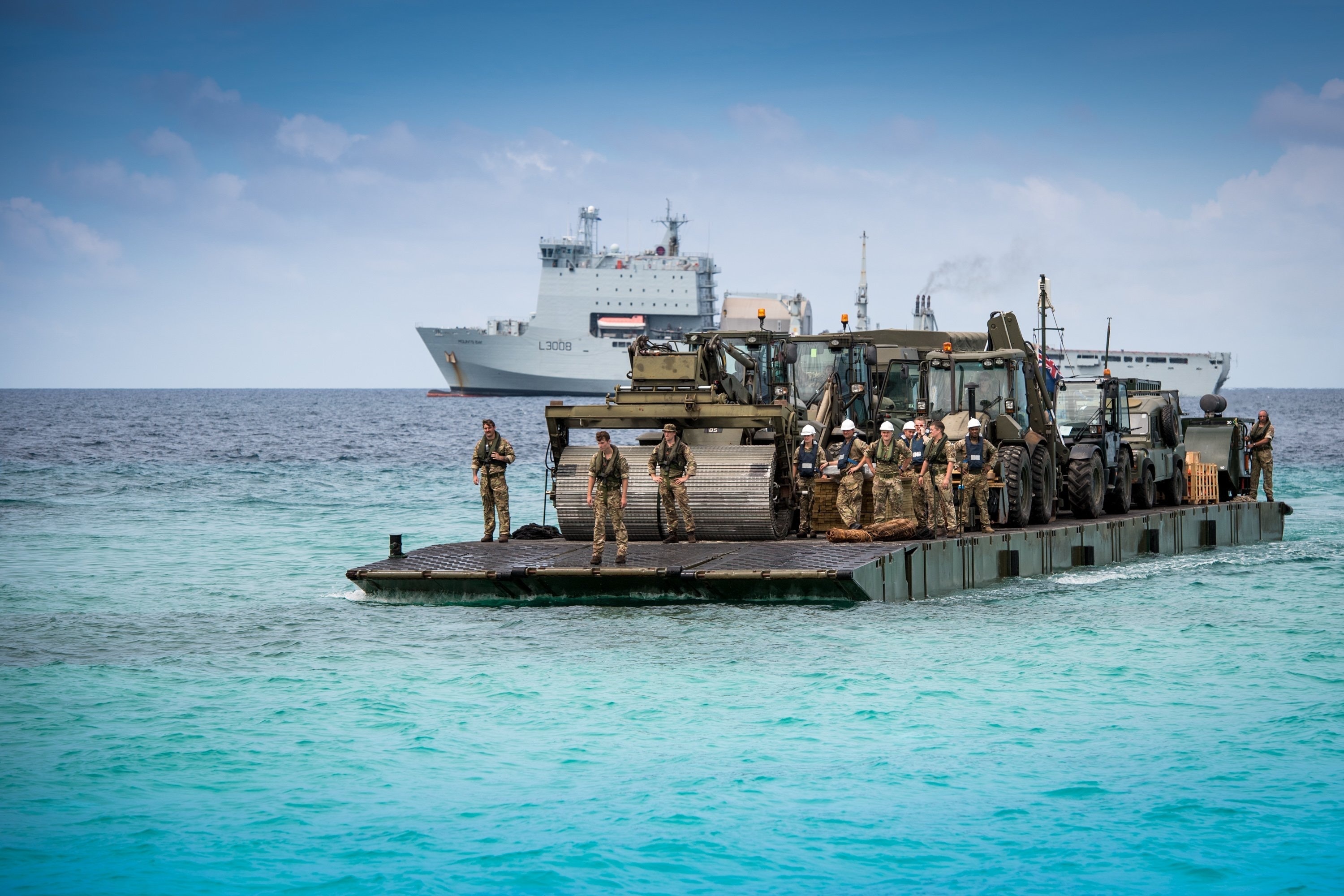 I love these ships, shame about the problems when building them though. But they are so flexible and offer many options, shame no dedicated hangar was fitted but a temp one does the job for one chopper.
One of my favourite British ships. I hope we get just as good or even better replacements in future maybe just like that Dutch/German ship, I can’t remember it’s damn name!….

Yes, I never really understood why they had no hanger fitted…Albion and Bulwark as well. Surely it wouldn’t have cost much extra (steel is cheap so I understand) and the extra covered space, whether used for aircraft or not, could have given real flexibility to the vessels!

It’s the story of MOD procurement, get 99% of the way and then cost cut on the final percent.

Just imagine how much more flexible they would be with a perm hanger or how much more useful the albions would be (effectively useless for peace time currently).

Same with adding CIWS to the frigates, missile defence to the carriers, torpedo’s to the t26, etc etc.

Yes, I was looking at the fit out of the Trieste the other day…even includes 3x76mm guns plus CIWS cannons and missile defence. Proper job!

The RAN remain very happy with HMAS Choules (nee HFA Largs Bay), and despite the new LHDs in the RANs fleet, the Choules will keep its role as Strategic Sealift.
Interestingly, the RAN chose to install the Phalanx CIWS on the Choules (and so use the provision provided) as well as fully crew it at 150+/- rather than only a core personnel of 70.

There is a real possibility that an increased level of such deployments is inevitable in the coming years, by the World’s navies?. With ‘Global Warming’ estimated to speed up more and more, countries will have to commit their naval assets to civil rescue duties.

Well Dock can carry a single LCU or 2 LCVP.

The LPD’s carry 4 of both, plus C3 facilities.

Another highlight as to why these alone would never have sufficed for the Amphibious role as some suggested last year when Albion and Bulwark were threatened.

Having said that these are flexible ships, carrying Mexeflote as well, and cutting one to save a paltry tens of millions was a massive error of SDSR2010.

To add to what you say, there are three ships, one of which is permanently in the Gulf as support to the minesweepers, one in the Caribbean on hurricane watch, leaving only one available for the actual role they were built for. Perhaps whoever undertakes the next defence review should take a long view, particularly since if we are intending to be more visible in the Far East the rate of Chinese construction, especially of amphibious shipping, should be high on the agenda when the threat is assessed.

The odds of Hunt being next PM seem to be getting better, and he’s made a few more references to increasing defence spending. The MOD might be in luck.

Unless something big happens in the next few weeks, i think it would be a massive surprise for anyone to beat Boris. Whilst i don’t get why his so popular, it seems he has the party members behind him.

What i am not clear on is what Boris’ view on defense is.

Odds are on Boris definitely. But with the likes of Penny, a staunch and influential Brexiteer, now supporting Hunt, he might have more hope than it seems.

Not much of a Tory myself, but I’d take Hunt out of the lot. I like his modern, moderate Conservatism and I think he has a passion and sense of direction the rest don’t (and the sense to invest in defence). Plus he’s a safe pair of hands, not temperamental.

Agree-Hunt would be good for Defence. Boris is a charismatic and intelligent man but how he in particular(in fact ANYONE) is going to solve the unsolvable Brexit riddle is beyond me. Parliament won’t allow a No Deal, won’t approve a 2nd Referendum, won’t sign off Mays Deal and the EU say they won’t negotiate further!
Mission impossible?!

I think that would inhibit any immediate projects from the MOD even if Hunt gets in. They can’t plan for double the money over a decade if Hunt could be gone in a matter of months. Or anyone for that matter.

Hunt would be a better statesman than Boris. As much a I detest European politicians they all view Boris in the same light as Trump and would be determined to put Boris in his place since they can’t do it to Trump. I know some people are willing to accept a hard devorce to free ourselves of Europe but it would hit the economy so hard in the short term it would be polical suicide. Maybe hunt can work something out wity Leo that T May never had the charm for.

Moderate Conservatism is not new Charlie. Often referred to as ‘One Nation Conservatism’, the best example of it was post WW2 when there was a considerable meeting of minds between Labour and Tory Party members. It became known as Butskellism, and often referred to as the post-war consensus (denied by some historians). Going back to the early C19th, the Tory Richard Oastler campaigned for an eight hour working day for industrial workers. Of late, the likes of Michael Hesseltine, John Major and yes, even Teresa May would consider themselves ‘One Nation Tories’ ….and proud to be so too!

“One Nation Conservatism” or “One Nationism” was really the brainchild of Desraeli as a counter to prevailing Classic English Liberalism. Most modern Tories like to claim they are of that liniage, but in reality the majority resemble the Blairites in Labour far more closely. Regarding Boris, I have never really been a huge fan, but the current political situation, I think, suits him best. The next few years are going to require boldness and whatever his weaknesses he is the only one I see willing to do what’s needed, and the only one likely to put the right faces in… Read more »

Hmmmm….Disraeli was a purveyor of Realpolitik, look at the 1867 Reform Act. I’m sure he and Bismarck would have got along quite well! As for Blair, he is a modern day One Nation Conservative! As was Ramsey MacDonald…probably! Regarding Boris, he will either be a national triumph, or a complete laughing stock…we can only wait and see!

One thing Blair wasn’t was a One Nation Conservative, but I agree on Johnson.

It will be really interesting to see the design requirements of the literal assault ships, should they still get ordered post change in defense sec.

Based on the tiny amount of information we know from the press release, they will be based on a commercial cargo ship, which could in theory make for an amazing disaster relief ship. Huge amount of room for supplies, plus potentially hospital facilities (probably not) and potentially plenty of room for helicopters.

Prime area for DfID and foreign aid budget to be used more effectively in conjunction with defence.

Put a real hangar on a Bay-class ship and fund most of the capital and operating costs from the foreign aid budget.