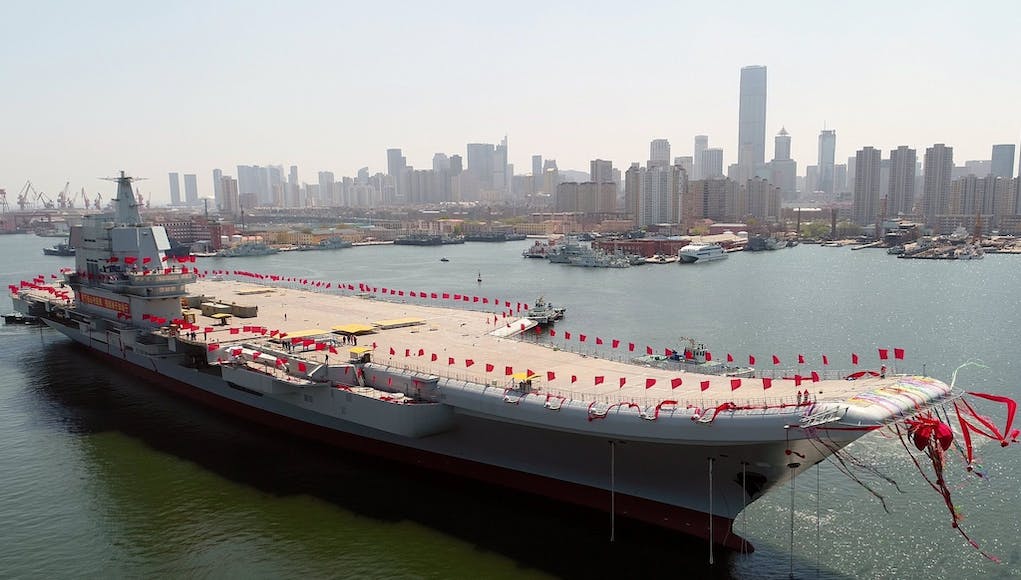 The rise of China as a maritime power was further enhanced by the news that China’s first domestically built aircraft carrier will be transferred from the dry dock of the Dalian shipyard, and will soon undergo trials and be fitted with systems to make her fully operational.

The test of a nation’s strength is its ability to project its power across the oceans, and to become truly a ‘blue water navy’.  A definition of a blue water navy is one which can operate globally, in deep waters over open oceans.  The term was used by the United Kingdom (a maritime global power) of a ‘blue water navy’ is one possessing maritime expeditionary capabilities globally. This would include moving ships, marines and aircraft to potential hotspots globally if needed.

The undertaking of building a huge aircraft carrier such as China’s Type 001A is a massive undertaking.  Requiring expertise in ship design, naval architecture, weapons systems, and naval airpower technology and systems for landing on such a large structure.  This is a significant technological step forward for the emerging superpower.  But this is also a statement – that the People’s Republic of China wants to achieve global reach and can be a contender for naval dominance.

However, one cannot help but consider that Trump’s naval build-up will be a massive undertaking, and shipyards across the United States will have to keep up with orders, and it is my opinion that the US will have to recommission some of its ships it has mothballed and bring those back into service.  At least in the short term until replacement ships can be found.

So this brings us to China. One can speculate, that its naval build-up in its 10,000 ton Coast Guard cutter, which can be used as a destroyer in times of war is aimed at ensuring sovereignty of its territorial borders.  This year, we have witnessed that world’s largest Coast Guard cutter patrol the South China Sea, and has a displacement tonnage of 12,000 tons.

As the diplomat is quoted in saying:

What is interesting about this Coast Guard cutter in particular is the heavy armaments it has in comparison to other Chinese Coast Guard ships which have lighter arms, either with light munitions or are just armed with water cannons.  In such encounters with other ships, the usual manoeuvre to offset your opponent is the use of ‘ramming’.

We have already seen this in regards to fishing vessels, and other civilian vessels from the People’s Republic of China associated with the so called ‘Naval Militia’ which are small craft that have a paramilitary capability and are state sanctioned by the Communist regime in Beijing.

This means that the Coast Guard Cutter CCG 3901 (12,000 tons), is a formidable force – and if it attempts to ram a ship it could cause considerable amount of damage.

In a show of strength the Chinese are showing its force potential by creating these ‘Monster’ cutters – term used by The Diplomat.  Even more astonishing the Chinese Coast Guard have commissioned over a hundred vessels since 2012, and the fleet currently has a total of 220 – 230 vessels.

The People’s Republic of China wants to achieve maritime supremacy either by the use of ‘Monster’ cutters, or by the use of its aircraft carriers, and through its fortifications and airfields on the artificial islands in the disputed South China Sea area.  I speculate that in the short to medium term, China will increase its number of ‘monster’ cutters, which can be used as destroyers in times of war, and it will continue to increase its maritime capabilities.

While direct parity with the United States on a maritime military level may not be achievable in the short term; I predict by the 2020s we may see China may be at least in a position to build the same amount of vessels if not create more in its shipyards and be on course to achieve ship-by-ship parity with the US Navy.  This will no doubt create security dilemmas for naval planners and military analysts in the Pentagon who no doubt will enact ‘war game’ scenarios to see who will win a war in the region. By improving the basic arithmetic of its fleet, the People Republic of China are increasing its chances of success.

Like the naval arms race before First World War, with the first series of Battleships, we are seeing a new one play out in the Asia – Pacific.  China wants to expand its territorial waters, and in doing so, is arming its navy to the teeth with new ships, weaponry, and capabilities.

Not to mention show it has the upper hand when it comes to the disputed territory of Taiwan which could be a flashpoint for a Superpower confrontation (the United States has a treaty guaranteeing it will get militarily involved if Taiwan is invaded).

One thing is for certain, the People’s Republic of China is on the rise and I cannot see its changing trajectory anytime soon.

It would be appropriate to at least provide a reference and ideally a link for the diplomat article quoted in this piece.

TW
this is probably The Diplomat article cited
http://thediplomat.com/2017/05/china-coast-guards-new-monster-ship-completes-maiden-patrol-in-south-china-sea/

America built it’s 20th century dominance on its manufacturing capability and infrastructure. China is now without doubt the best in the world at both those things and on a scale to dwarf all other nations, The rate of their frigate and submarine building is so astounding it should be an electric shock to UK Govt shipbuilding and submarine plans. It may take a while for China to catch up with systemic skills and innovation (as opposed to stealing) but anyone who thinks that won’t come simply aren’t paying attention. China is becoming the global power and last weeks announcement of… Read more »

UK Govt is asleep at the wheel……

Yep, whilst blithely blowing a cool $20bn on Foreign Aid in the process – half as much as America with an economy one sixth the size. #FUBAR

Agreed. A first step would be to limit foreign aid to £10 billion with the rest going to Defence. We would still be doing more than almost every other country in the world.

Dream on , the Mantra is we will win by winning over the recipients of our aid who will rush to support us in our hour of need. YOu know Zimbabwe , Tojo, Yemen, Basutoland, Timbuktoo , Never Never land . La La land etal.
No sweat

Re David’s comment of 5th September, there’s nothing new about that, i.e. the UK Government being asleep at the wheel………………..! Historically it’s usually been so.

How is a 12k ton cutter bigger 50% bigger than a 10k ton cruiser, that would mean that the Ticonderoga-class guided missile cruiser was only 6k ton, which clearly it is not !