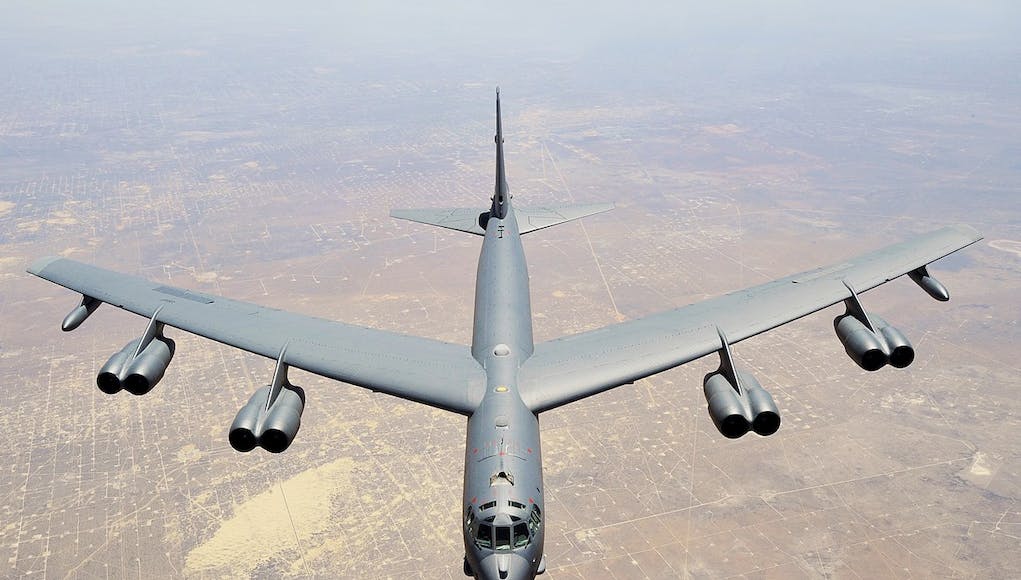 Rolls-Royce has completed early engine tests with the F130, the engine which will be offered for the US Air Force B-52 Commercial Engine Replacement Program.

Full-engine tests were completed recently at Rolls-Royce facilities in Indianapolis, US, confirming the engine design and performance are a perfect fit for the B-52 aircraft say Rolls-Royce.

In addition to full-engine tests, Rolls-Royce has already compiled more than 50,000 hours of digital engineering time to further develop and refine the F130 for the B-52.

“The Rolls-Royce F130 engine for the B-52 is part of a proven and efficient family of engines with millions of operational hours. We are excited about our test results in Indianapolis as we continue to demonstrate that the F130 engine is the perfect fit for the B-52. The F130 is the affordable, modern option for this iconic US Air Force aircraft.”

The F130 series of engines already power aircraft in the US Air Force fleet, including the E-11A and C-37 aircraft, with more than 200,000 hours of combat flight operations.

That doesn’t sound like a particularly powerful engine given that a Trent jet engine can generate 90,000 pounds of thrust so why are they going with such a low power option?

I do assume however that this is much lighter and more fuel efficient that the engines it’s replacing.

I think fuel efficiency would be the key here, as the B-52 will most probably be used to launch long-range weapons at distance on day one of any future conflict in larger numbers than the B2 Spirit for example including LRASM. I’ve often wondered why the UK has never purchased a handful of these, as we could make very good use of them compared to the cost of a B2. With potential larger naval forces that we may encounter in future conflicts, serving primarily in an anti-ship role, we could justify spending on the upgraded version at a fraction of… Read more »

“The aim is to reduce maintenance costs and improve fuel efficiency by at least 20 percent, while maintaining ceiling and takeoff performance.”

Many many years ago I thought like a boy, talked like a boy and asked questions like a boy, one of my questions was simple why did the MoD or the RAF not ask for Concord with two drums of eight cruise missiles. Now that would have been a good strike platform.

I seem to remember seeing a drawing of Concorde with some missiles fitted under the wings. Not sure what the missile were though as they were pretty large.

Not sure if Concord could achieve this Ron?
And with more fuel-efficient engines with an increase of up to 20%?

This is a mans world, or so the song goes!

Very interesting Ron, and as you say, an excellent opportunity missed.

I’ve said many times before here that standoff weapons are the best bet for day one scenarios, and with potential problems in the south China sea, we could do with something like the upgraded B52 to deliver a useful anti-ship capability in the numbers required should we need to do so.

Given our current budget restraints and lack of long-range aerial capability, the enhanced B52 just might fit the bill?

The RAF practically did have a a Concorde like a/c in mind for their fleet in the form of the BAE TS2-R but the project was killed off by the Wilson Labour govt due severe economic issues.

Because there will be a one for one replacement. You don’t need 8 engines at 90,000 lbs each. The airframe couldn’t handle it!. The current engines, TF-33s provide 17,000lbs of thrust at MRT. So the new engines are within the designs specs of the aircraft.

It’s not as simple as just sticking another engine to the wing, as much as we (both) wish it were. The engineers need to consider issues with weight distribution, the actual weight the wings can take etc. To do the job, the engines need to be vaguely equivalent to those that are being replaced. a few 100s of kg either way won’t make much of a difference a few 1000s kg will.

Boeing redesigned the 737 wings several generations ago when they switched to the high by-pass engines. The 737 of today is very different to the older models. It made financial sense for them to do so.

I’m sure they could switch to four engines on the B-52 if the money and requirement was there, but it would require a complete redesign of the wing system and with only 75 examples left in service it doesnt seem cost effective.

Shame they forgot to redesign the rest of the 737, perhaps then they would not have had to hack a dangerous design together… And ye the 737 is very different from the originals, however it sill bizarrely flies under the same 1967 certification despite effectively being a completely different aircraft.

As for the B52, I initially wondered why they are still going for 8 engines when 4 larger ones would likely be more efficient and easier to maintain. However I noticed how low the outer engines are to the ground when there is no lift on the wings.

I’m not sure I would say the 737 is a “dangerous design”, the 737 has a very good safety record overall, the issues with the 737 MAX are explained here if you’re interested; https://www.youtube.com/watch?v=LQCPSXTE9Mg

Of course, the way Boeing has handled the crisis leaves a lot to be desired.

You’re right about the B-52 wings, the flexibility is what would require the redesign of the entire wing system.

Just been reading up on this, apparently the USAF had considered a 4 engine reworking for which RR proposed an RB 211 derivative but the wing modifications were considered financially prohibitive. P&W are proposing an upgrade of the present engine but that seems more costly and a less efficient option over the programme life. However there seems to be no actual commitment or budget to actually upgrade the aircraft as yet and this is a proactive proposal based on the sense that it will happen and no doubt encouraging it, by the prospect of new work and investment for its… Read more »

The US Air Force plans to issue an RFP for the B-52 engine replacement by the end of this calendar year with contract award sometime late next year. This has become a very high priority item given the fact that the US has virtually flown the B-1 to death and they have become prohibitively expensive to maintain. In early August, the USAF Chief of Staff reported to Congress that the USAF only had six B-1s able to deploy.The plan is to deactivate the B-1s and B-2s and only maintain the B-52s and B-21s. This engine replacement will get done.

Another problem with 4-engine configurations is loss of an engine on takeoff. With 4 engines you lose 50% of thrust on one side, and the B-52 tail/rudder has insufficient “authority” to correct for that, so you crash. With 8 engines you only lose 25%, which is manageable.

Once upon a time the BUFF had a larger, taller tail, but that had to go when the mission changed from high-altitude to low-medium altitude. It wasn’t needed down there, and it couldn’t take the higher aerodynamic loads, so it was cut down.

They need to keep the same 8 nacelles to sustain flight characteristics and prevent them breaking the wing spars and/or dragging along the tarmac! – so 8 smaller engines rather than 4 large ones.

Performance improvement is likely less important than efficiency and what can be easily fitted onto the pre-existing nacelles with the least engineering and modification. The more different in form the engine is, the more modification to the aircraft is required to fit it, the more approval testing is required, the more expensive it is. The 737Max issues with different engines are a good example of how much of an impact this can have, and how important it is to get right. This is about as close as the US comes to a budget project like the UK does them, so… Read more »

I don’t know if you noticed but the B52 has eight engines, currently being the military version of the PW JT3D, which powered The B707, which is old technology but delivered around 17,500 lbs thrust. Therefore the good old B52 requires small diameter engines, hence RR developing the F130

with the older airframe the f130 engines are just right, don’t want the wings comin’ off. engines more like the orig. ones require less modifications to airframe. also aircraft will fly as the original design, minimizes training for aircrew since the handling / flight envelope remains nearly the same. with these new engines the b52 will enjoy many more years of reliable service, no need for a “new” $$$$ bomber.

The problem with a larger and more powerful engine is that they would have to redesign the wing as well as the nacelle. With these, they only have to modify the engine pods, saving a great deal of money.

Flightglobal is reporting that the USAF may retire part of its B-1 fleet, to switch the funds to B-21. I would love the RAF to have a single long range bomber sqn with 6-9 2nd hand B-1. Probably cheap to purchase, but expensive to run.

The real beauty of the RR offer is that the USAF is already operating this engine (on their Gulfstream VIP transports).

I think they should go with more thrust for more upgrades!

My dad flew the N52 H models when we were stationed at Homestead AFB Florida. That was during the Cuban missile crises in 62. He died in 2004 at the age of 79. Today he would be in his nineties. This plane needs to be retired ASAP and let’s move on to newer technologies. It’s lived way past it’s time. The only plane I think should deserve it is the B1.

Looks like the B1 is also getting a reprieve.

Will there still be 8 engines?

With so few B-52 left flying the idea is cost the F130 is Good fit. It can be hung on the existing wing it is a more cost effective operational. A engine with more thrust could require re wotking the wings as would trying a 4 ingine upgrade.

By way of an opposite, check out the ‘re-engined’ 747 at Dunsfold that was used as a film set for Casino Royale. They’ve removed the outer engines, replaced with external fuel tanks, and made the inner pylon into a twin like the B52.
I didn’t know about this when I went, and was thinking ‘what the hell’s going on here’ until I read the info board. It’s quite well done, actually. It convinced me!
SimonJ