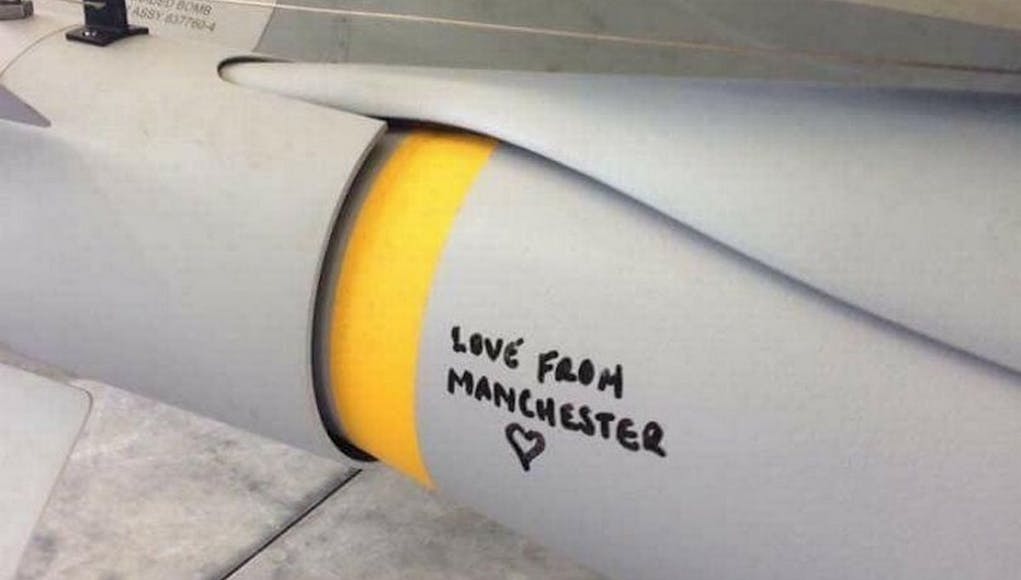 The image was thought to be a social media hoax but the Royal Air Force have now confirmed it is genuine.

The Royal Air Force have now confirmed to the UK Defence Journal and other news outlets that the image, created in response to the Manchester attack, is authentic:

“The RAF can confirm the photo was genuine.”

The picture appeared on Twitter earlier with the caption “RAF Armourer on a Reaper UAV squadron wrote this on a Hellfire missile before taking off on a Syria mission” however it is now understood that the image shows a message on a Paveway IV bomb loaded on a British jet carrying out air strikes from RAF Akrotiri in Cyprus.

In addition, The Sun quote a Royal Air Force spokesperson as saying:

“The sentiment of the message is understandable under the circumstances. There’s a history of messages being written on missiles in the RAF. It’s unlikely the individual responsible for it will be disciplined.”

“Paveway IV significantly increases the RAF’s capability to deliver precision effects matched to the target set. The weapon is cockpit-programmable and allows the aircrew to select weapon impact angle, attack direction and fusing mode to detonate in airburst, impact or post-impact delay modes.

The fuze minimises collateral damage through the ability to detonate the weapon when buried or partially buried, and is fitted with a ‘Late-Arm’ safety functionality that will not allow an off-course munition to arm. The warhead is also designed to meet the latest requirements of NATO Insensitive Munition safety policy.”

The cost of the operations against Islamic State and other details of the campaign were revealed in a briefing paper. In March 2015 the MoD confirmed that the net additional costs of the military air operation would be met from the Treasury Special Reserve; while the costs of training and equipping the Iraqi and Kurdish security forces, and the provision of key enablers, would be met from the MoD’s Deployed Military Activity Pool.

I have no problem with this message and wish the RAF good hunting.
Putting messages on bombs is a military tradition going back to the first military aircraft. I would not see this as anything other than high spirits, good morale and a wish to strike ISIS back for the cowards that they are.

god speed and good hunting! We’ve a long history and tradition of ‘messages’ on bombs, projectiles, missiles etc. Individual responsible should get a leave for a day not be ostracized by his/her action.

Why waste all that fuel going to Syria when there is areas of the UK no less soaked in jihad?

No one in government will ever admit that

If British people were honest about bombing jihad, why confine it to violating Syrian air space?

And exactly where are you getting these figures Joe? From your rectum?

Because 23,000 people represents 1% of the Muslim community or 0.5% of the Catholic community. Terrorism is not limited to a religion or a region. Otherwise the only terrorists we would have to worry about would be our homegrown ones who range from the 17 November Revolutionary Organisation to Ulster Volunteer Force.

The bombing in Syria is against clearly identified military targets. If Jihadis in Britain were found in the process of waging war (i.e. bearing weapons with an intent to use), and in a location where they could be attacked without civilian casualties, I am sure we would use deadly force against them. Due to the probably more confined environment where such a confrontation would take place in the UK compared to a Syrian battlefield it would more likely be small arms fire than bombs and missiles but deadly force has been used on a number of occasions in the UK,… Read more »

There should be no pride in messages written on weapons that kill people. Killing people whether they are good or bad is not a good thing, if it needs to be done this way (And I won’t even go into whether it should here) it should be done in a way which is professional and seen as an upsetting thing to resort to. especially as many of these missiles will more than likely end up killing innocent people in the process. This is a silly tradition. It makes me sick to the stomach at the hypocrisy that we can mourn… Read more »

It’s A bomb… ISIS may find the explosives within more offensive than the message without. Hopefully, anyway…

Its a fake, there is digital artifacts around the writing..

Bad photoshop job, obvious to anyone with a basic understanding of image manipulation.

Haha I LIKE IT I HOPE ITS BIN DEPLOYED AND ISIS WELL AND TRULY GOT THE MESSAGE NICE ONE AND GOD BLESS OUR BRAVE MEN AND WOMEN OUT THERE IN ALL OUR ARMED FORCES IME A MANCHESTER LAD BORN N BRED and PROUD OV IT .STE

Can’t see any problem with this, however much some MOD bods might not want it to be publicised. Godspeed the RAF.

Queue outrage from the left who ACTUALLY HATE THEIR OWN NATION AND ITS WAY OF LIFE.

I wish UK good hunting Bomb the shit out of ISIS (And liberal assholes fuck you too^^)
Greetings from Germany.

Hopefully the recipients didn’t have time to read it.

To the best RAF ignore the loony lefties.
No problem with what as been put on the missile and i am glad that there care.

There has always been a tradition of messages on bombs… The RAF are the best in the world!! Good hunting and safe return for you all. Oh and kill as many of those bastards as you can…..