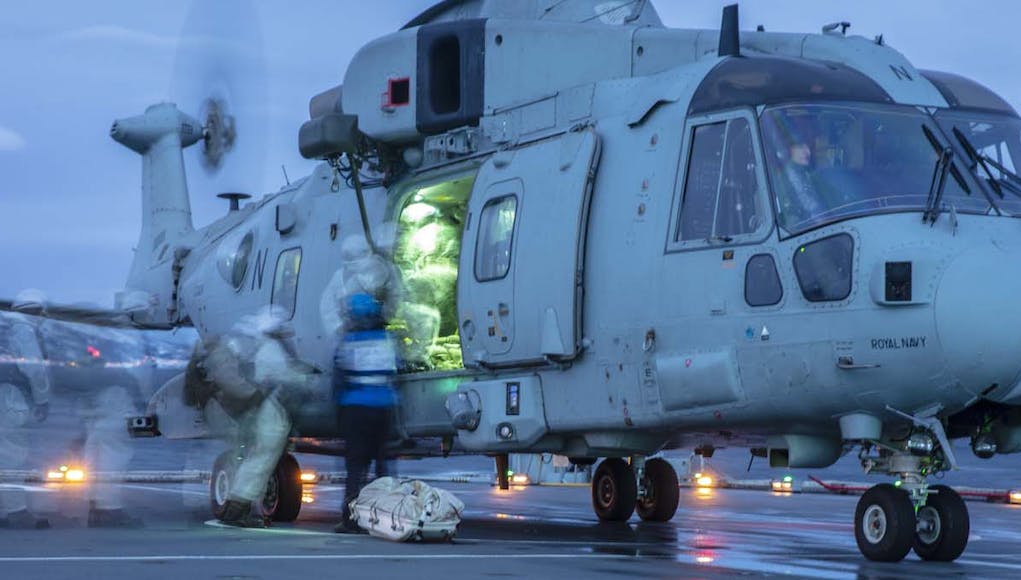 Royal Marines have launched raids on the Norwegian coastline as part of an exercise.

According to the Royal Navy, deep within the Arctic Circle, the first objective of the mission on saw commando forces launch an amphibious attack from UK flagship HMS Albion using boats operated by Norwegian allies.

“Embarking on the Royal Norwegian Navy’s CB90-class fast assault craft and Skjold-class corvette, a commando team covertly infiltrated the enemy positions set along the Norwegian fjords of Senja Island, more than 685 miles north of capital Oslo. The commandos’ mission? To cause havoc amongst their adversaries.

In addition to adopting progressive tactics, the unit embraced Future Commando Force development by operating as 12-man teams, with each commando bringing a unique skillset and individually chosen for the mission at hand.”

“Having been manoeuvred into position off the coast by the Norwegians, the teams (drawn from 45 Commando’s Recce Troop, Joint Terminal Attack Controllers and gunners from 29 Commando Royal Artillery, and Royal Engineers from 54 Commando Royal Engineers) silently landed ashore via small raiding boats operated by Plymouth-based 47 Commando.

The commandos then coordinated a salvo of artillery fire and air support onto the enemy target, quickly destroying their position and allowing the amphibious task group to gain a foothold on mainland Norway. Shortly after, artillery strikes hit more enemy positions along the coast, enabling commando troops transported by Commando Helicopter Force Merlins to land and support the fight.”

After the cancellation of Exercise Cold Response– which this mission was a part of – the 3 Commando Brigade elements in Norway will continue with scaled-down training activities, say the Royal Navy.

The Norwegian Armed Forces have stated they will begin to shift their focus from the exercise to assisting civilian authorities ‘due to the ongoing coronavirus situation in Norway’ – this has been referred to as a controlled closure.

Did they manage to get to their objective and secure the supply of Toilet rolls?

Is crazy how most people don’t keep more than just an extra roll or 2 of TP on hand…..

Yes, just before the French got to them.