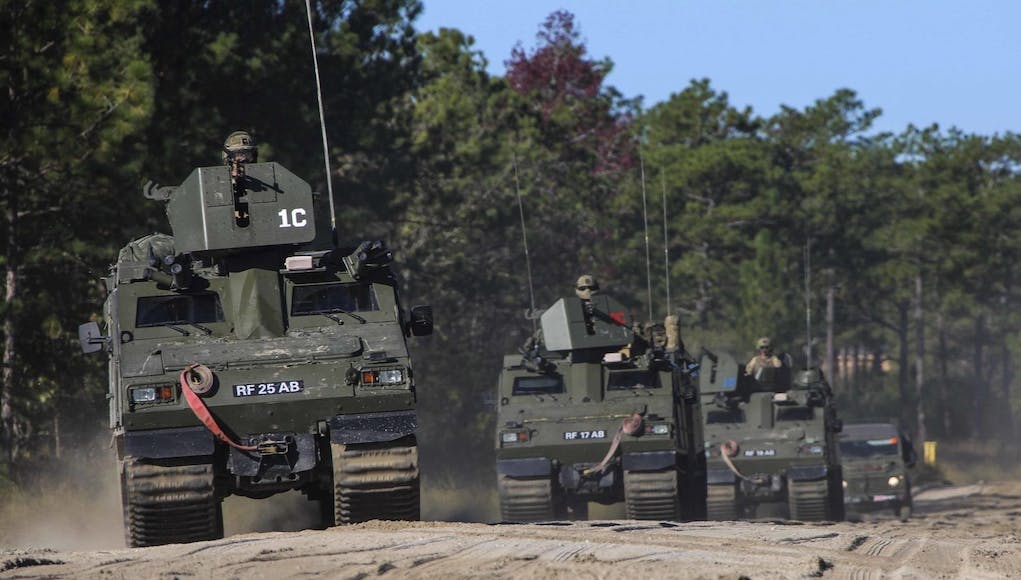 Royal Marines have stormed the beaches of North Carolina but don’t worry, it’s just an exercise.

British forces took part in what the US Marines are describing as ‘the largest, most dynamic war game staged on the Eastern Seaboard this year’.

45 Commando from Arbroath accepted the invite alongside troops from Norway, France, Canada, Brazil, the French Foreign Legion, and Mexico.

Bold Alligator reached its climax with the ‘liberation’ of North Carolina. It fell to the Royal Marines to move ashore from a ship and retake MOUT, the Military Operation Urban Terrain facility, a replica town where troops can practise and rehearse close-quarters battle and explosive and mechanical ‘methods of entry’ drills.

“Camp Lejeune is over one and a half times the size of the Isle of Wight, so this gives us the opportunity to do some really large-scale training,” explained Sub Lieutenant Johnny Danks, 45’s Education Officer in a press release. 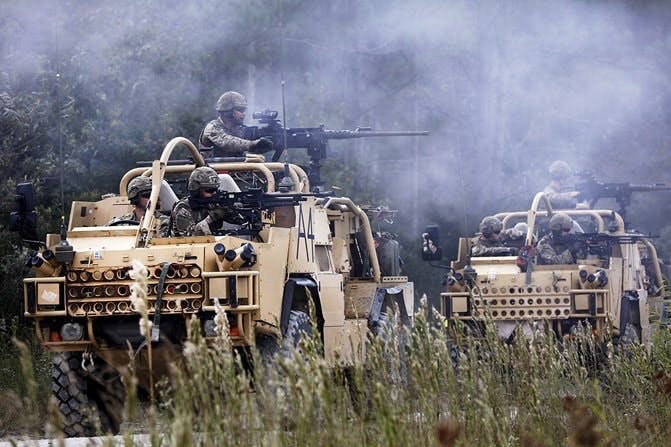 45 Commando deployed with their Jackal vehicles. Vehicles the MoD say are designed for rapid assault and fire support.

Lieutenant Colonel Duncan Forbes, Commanding Officer of 45 Commando, said both the exercise and the setting had been just what his unit needed.

“The training areas of Camp Lejeune provide the perfect ranges to practise our firing and manoeuvres – we can practice and repeat serials, consistently improving and testing ourselves in new scenarios.

“Overall Bold Alligator has been a fantastic opportunity for us to hone our amphibious skills in a fast-paced and complex scenario with our closest international partners.

“Our ability to launch from the sea at a time and place of our choosing and to fulfil a variety of roles, from amphibious operations to disaster relief, as we’ve seen in the Caribbean over the last few weeks, is a skill unique to the Royal Marine Commandos.”

Did they take copies of their CV’s?

They would be treated with more respect in the US.

Not sure that’s a fair comment – the forces are respected in this country to a degree that is unprecendented in recent years. Mind you, if you’re talking about the tory defence slashers to our forces I would agree.

Wont be from our ships for much longer

Not to worry, the British Government in looking to rehabilitate the thousands of followers of ISIS (As per the media this past week) on top of giving them council homes and pay their rent, will offer them well paid jobs (complete with Halal food and as many wives as they want) as the new British Jihad Battalion where they will use their experience of sailing across the Med to assail enemy bitches whilst human rights org Shave the children provide covering fire “They are children we should take them in” BTW the story about rehabilitating ISIS terrorists with council homes,… Read more »

Who Cares
Reply to  farouk

You got a source for that or are you talking out your arse?

Source. As for Mr Corbyn I doubt he can do much more damage to our forces than the tories have done over the last 7 years.

You don’t think J C could do a worse job!!! HO HO HO…you ain’t seen nothing yet, and I hope you never do.

I don’t think he could – he won’t be allowed to anyway. He’ll be restrained by the soft left of the party, otherwise he’ll split it and be out of power. Do remember which party it was that joined NATO, initiated the deterrent etc.

Paywall blocks it so I can’t read it. It’s ‘The Times’ and says ‘could’ so I’m off to Northwich to get a large piece of rock salt.

I tried that once.

Hate to say it but I think these boys and girls will end up without Albion or Bulwark if the latest deficit news is anything to go by.

Are you referring to the IFS report?

And that the IFS is partly funded by the EU.

Don’t get me wrong, I don’t think we are in as bad a position as some make out but the general feeling is that we will still have a budget deficit for 5+ years. If the Government’s stated aim is to wipe that out, as they have said they will do, then more cuts are coming.

Personally I think we should add a few pence to high rate tax and target 8+ years to wipe out the deficit, then increase MOD funding by more than the 0.5% over inflation that has been promised.

Given the dire predictions prior the brexit vote I have lost confidence in economic experts.

The alphabet spaghetti tosspots you mentioned have all be wrong…..repeatedly with their doomsday predictions regarding Brtain post-BREXIT.

We haven’t left yet – that’s when the shit will hit the fan.

the deficit is planned to be overcome within 8 years not 5 (2025), we then have the small question of the massive debt to deal with which wont be cleared in our lifetimes. Don’t expect to see an increase in the armed forces budget to suddenly happen in 2020, unless a major war breaks out before then.

When was the last time the RM stormed a beach under fire?

But they didn’t come under fire as they assaulted the landing areas.

The Argies had just an OP in the area

What about the Argie aircraft? We already had several battalions including Rapier and blowpipe SAMs ashore the first air strikes on San Carlos

The beach landing was unopposed.

Mike – Maybe Google what was known as ‘Bomb Alley’. I will give you a clue – It was San Carlos Water. And to get to shore they had to disembark from ships (under fire) traverse to the beach(under fire) and then establish themselves (under fire). You say we already had “several battalions including Rapier and blowpipe SAMs ashore? Actually no they weren’t until AFTER the beachhead was established. Yes the SAS had Blowpipe but they were ‘elsewhere’. So how did these ‘battalions’ get to the beachhead? On a day trip from Stanley?

As far as I know, they haven’t.

Note that they were being taken ashore in ship to shore connectors (large hovercraft) – surely we can do this from our solid store ships if we design them along Karel Doorman lines… 4 of these will certainly help ease the burden of losing our current vessels. I know its a compromise – but everything is these days. They can work as stores/humanitarian aid vessels most of the time and re-role to the require amphibious support role as needed. Better than nothing in my opinion. Only down side is that the S2S are £60-90m each so we are not really… Read more »

Our 4 Hovercraft are rather more modest!

Do the marines still use the BvS-10 or were they scrapped after Afghanistan in favour of the Singaporean model?

They use Viking yes. They were meant to equip Stand Off Companies in each Commando but as far as I’m aware that didn’t happen and armoured support Group RM at Yeovilton use them.

Did I read that correctly, the Marines are unique in amphibious assault varied role missions , maybe for now but the MOD by rumour are decomissioning the two assault vessels, Not surprising

If they saved money by not paying the MOD staff so much money (for example a Chief Technology Officer £796 a day really what a joke) then perhaps we would be able to fund the actual people (all branches of our armed forces) who are willing to sacrifice their lives and defend this country.
Instead of cutting troops to cut the budget lets get rid of the free loaders or drastically reduce their wages.