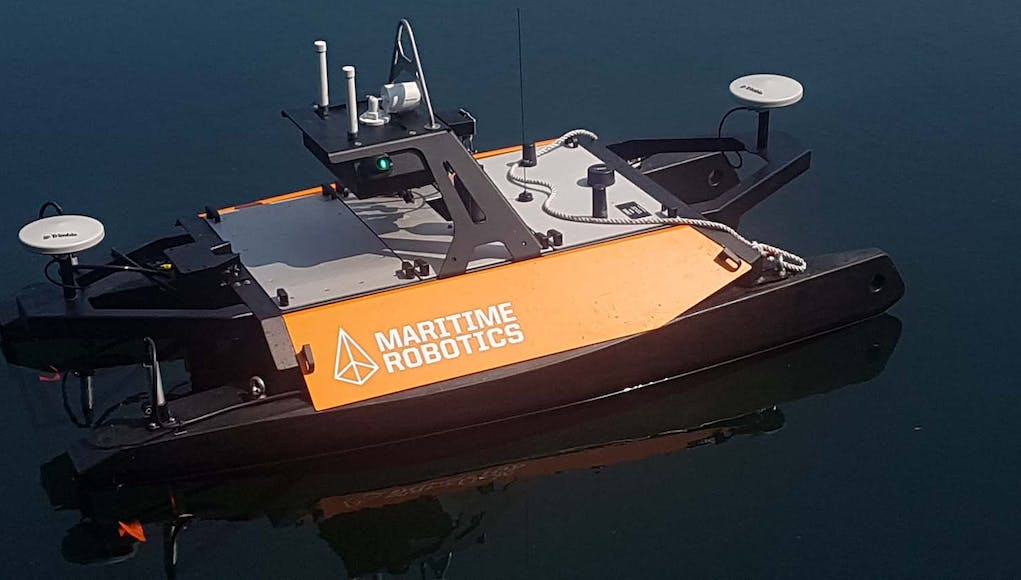 A new robotic vessel has begun trials with the Royal Navy.

The Otter Pro has been put through its paces at the Defence Diving School, on Horsea Island, Portsmouth, say the Royal Navy in a news release.

“They were testing the use of the remote-controlled vessel for conducting underwater survey operations where, with a range of sensors, it could gather data on the water around it and objects on the seabed. In the tests at Horsea Lake, the Otter Pro was able to collect sonar imagery of a number of wrecks – detailing evidence of decay and structural collapse on a sunken day cruiser, motor boat and helicopter.”

It is understood that the vessels sensors also picked up swim lines and seabed erosion caused by divers.

The Royal Navy also say that during its first hour in the water, the vessel, controlled by trained RN personnel, proved its ability to deploy and gather survey information quickly and effectively – surveying an area the size of the pitch at Fratton Park.

“Although the Otter Pro is being operated to enable Project Hecla to refine future operating concepts of uncrewed surface vehicles in future military surveying application, it has begun to prove itself as being superior to existing portable systems. Using a rapid response context, this vehicle was mobilised within an hour of arrival having been transported to the site in a van.

The team on its first outing surveyed Horsea Lake (7,000 square metres) in 40 minutes and then generated a viable product within an hour. This was achieved with a team of three without the need for a boat or jetty facilities for launching or recovery. During surveying, two of the team acted as pilot and looked out for the vehicle and the third was processing the data in near real time. Our existing platforms would be hard pressed to match this performance in a rapid response scenario.” The next stage of the trials will see the Otter Pro, from RS Aqua Ltd, tested in a more complex environment and its near-real time data processing will be refined, you can read more here.

That reminds me, the echo’s need replacing this decade, so I’m guessing their job will be taken up by robots?

Mark B
Reply to  steve

Everything has it’s weaknesses. If we stop moving forward because things might not be 100% we will end up going backwards. We must just work on getting the security as tight as it possibly can be.

I read a similar sort of article regards underwater surveys last night on the Warzone: Small Unmanned Helicopters Used Lasers To Map Littorals In Recent U.S. Navy Tests The U.S. Navy recently conducted successful flight tests of a UAV carrying an aerial laser system designed to map the ocean floor in shallow water areas. While details are scarce, we know that the tests used a Light Detection and Ranging, or LIDAR, system aboard a small unmanned helicopter. While such a system could be an important tool for making detailed topographic maps of waterways and littoral areas, there could be other… Read more »

What is described in the article above really has potential and is much more interesting. I am very curious to see the kind of data it can produce.

The navy really is embracing new developments. My only worry is that they look at unmanned as replacements of manned ships instead of supplements to them.
The mine hunters and survey ships give a presence, able to patrol and give valuable leadership experience yet look like easy targets to save money, with no sign of the mine hunters motherships yet more ships being retired recently.