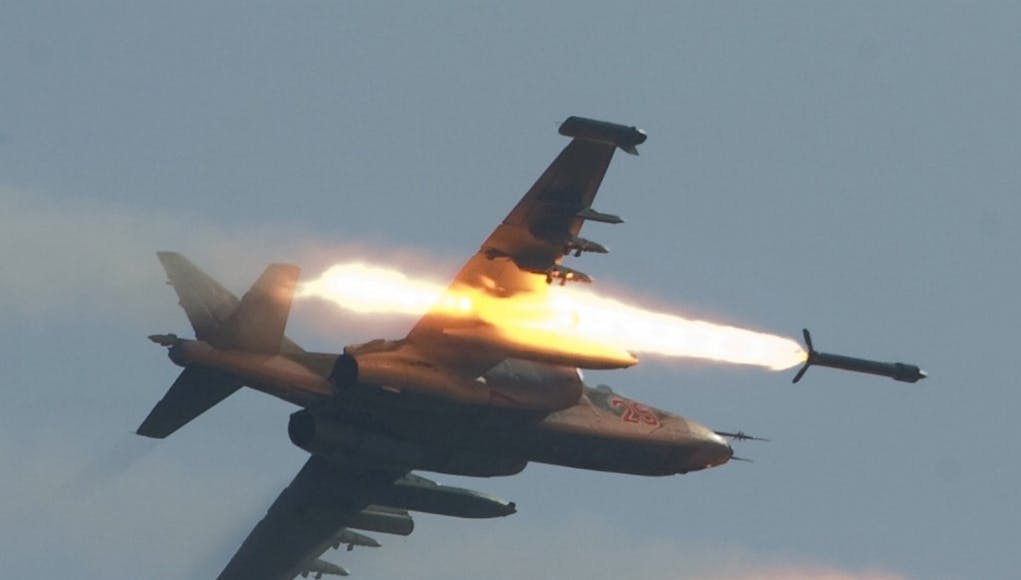 Russia’s Colonel General Viktor Bondarev claimed “not a single bombing raid missed the target”. The only way Russia could have hit 100% of their targets would be if their target was the ground.

Throughout the campaign, Russia’s own Ministry of Defence footage shows bombers releasing non-guided munitions in stark contrast to the Western forces which exclusively use guided munitions to minimise collateral damage.

In October last year, Russian strikes killed at least 13 people after hitting a field hospital in Syria, the Syrian Observatory for Human Rights said. The strike took place on the town of Sarmin in the northwestern province of Idlib on 20 October. The group have also claimed that Russia’s air strikes in Syria have so far killed 370 people, one third of them civilians, since it started.

Additionally, a Russian cruise missile of a type used in Syria hit a remote village in the north of Russia after going off course during a test flight, the defence ministry said it caused no damage when it fell near the town of Nyonoksa on the White Sea coast in the Arkhangelsk region. Nyonoksa is by the White Sea, 40km west of Severodvinsk, a test range is near the village.

In October, four Russian cruise missiles launched from the Caspian Sea fell short of their targets in Syria and crash landed in a rural part of Iran.

It was been widely reported that at least four missiles crashed as they flew over Iran. It’s unclear where in Iran the missiles landed, Russian ships have been positioned in the south Caspian Sea, meaning the likely flight path for missiles into Syria would cross over both Iran and Iraq.

Russia claimed “not a single bombing raid missed the target”, while no modern air force has a perfect record, this is clearly incorrect.

and their athalets have never used perfomance enhancing drugs EVER

No Clickbait headlines like that please! You’re better than that, UK Defence Journal!

Because its enticing enough to click to find out whats in the article. That’s click bait. It baits you into clicking.

We actually had that discussion before publishing this, some of the team agree with you. To that end, we’ll not be doing it again.

I know what click bait is but I don’t see how this was related to that..

Rhys Faulkner Well I’ve made an incredible response to your inability to understand how it’s related. To find out what it is go here: http://i.imgur.com/vPVzph9.png

We didn’t bomb civilians. You are making out this was done intentionally.

Well they are full of it, always has been and always will be.

I really think that the UK should rethink its position on Russia…As the war in Iraq and Libya was a total disaster…Blair and Cameron both failed these two nations and have left them in chaos…In the second WW 2 my father fought for the UK and Russia lost more than anyone defending itself ,over 25 million killed… let the UK accept the Russians olive branch and have good relations with another great Christian country….Bury the hatchet and save the world from a nuclear war…The world is tired of leaders in the west warmongering like USA constantly invading sovereign countries and… Read more »

UK is the curse to the world. From their Shakespeare ‘civilization’ through their grammar school ‘colonization’ to their ‘bbc’ propaganda. Only Russia has them and their US co-charlatans by the balls.

Note 1: There is a difference between bombing raids and individual bombs. The raid may hit the target. The fact that most of the bombs missed doesn’t mean the raid as a whole missed. Means you wasted loads of munitions and kill lots of innocent civilians though.