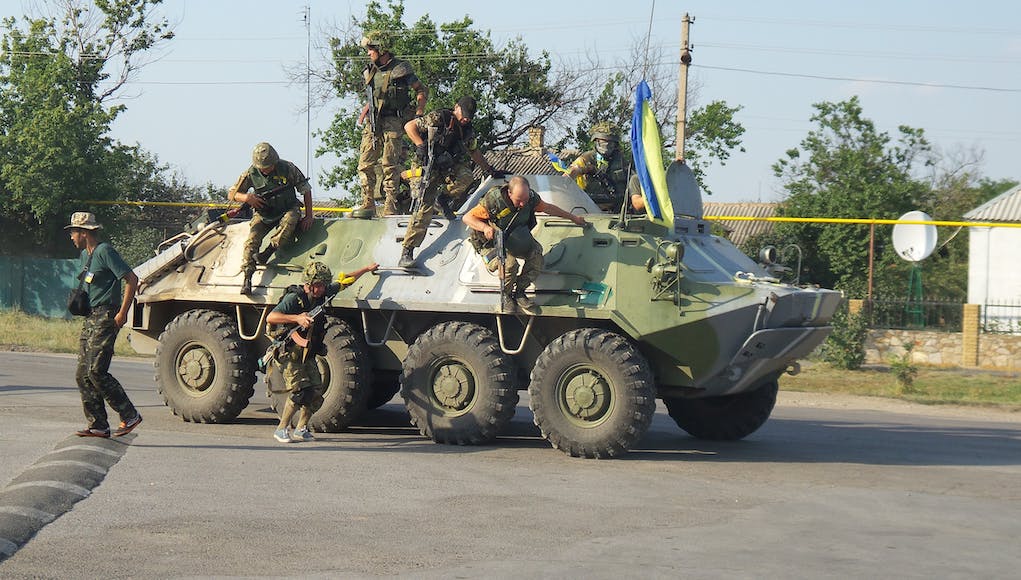 Accusations from Russia state that Ukraine is using terrorist tactics to try to provoke a new conflict and destabilise annexed Crimea. Ukraine denies Russia’s assertions, saying they are a ruse to stir up tensions with Kiev.

It is understood the claims come from reports that that two of seven saboteurs in one group had been killed and five captured by Russian forces.

Sources told local media that had confessed to planning a series of bombings at Crimean tourist resorts and said their objective had been to spread panic to destroy the tourist industry and not to kill anyone.

Since Russian control over Crimea was established in 2014, the peninsula has been administered as part of the Russian Federation except for the northern areas of the Arabat Spit and the Syvash Sea which are still controlled by Ukraine.

Within days of the signing of the accession treaty, the process of integrating Crimea into the Russian federation began: in March the Russian ruble went into official circulation and clocks were moved forward to Moscow time, in April a new revision of the Russian Constitution was officially released with the Republic of Crimea and the federal city of Sevastopol included in the list of federal subjects of the Russian Federation and in June the Russian ruble became the only form of legal tender.

In July 2015, Russian Prime Minister, Dmitry Medvedev, stated that Crimea had been fully integrated into Russia.

Though Russia has control, sovereignty over the peninsula remains disputed as Ukraine and the majority of the international community consider the annexation as being illegal. A range of international sanctions remain in place against Russia and a number of named individuals as a result of the events of 2014.

The First Yatsenyuk Government of Ukraine, along with most of the sovereign states in the world, did not recognise the Republic’s claim to sovereignty, nor the unification of the Autonomous Republic of Crimea with Sevastopol, nor the referendum that paved the way for Crimean secession.

So one sentence, with no details, about the incursion. Then several paragraphs about what happened last year? Breaking news, obviously.

Call bullshit on that one. The only plausible Ukranian military activity could be a SF patrol or one of the far right battalions over stepping their orders.

We know all about Russia’s methods but what do we really know about Ukraine’s?

Maybe they want the land Russia invaded back

The eastern parts of Ukraine? Sure why not. Crimea? Well no

I wasn’t referencing that! Merely the psyche and methods. Russia causes incidents and then plays the victim card. Has done for centuries. But what about Ukraine? What are their methods? Do we know? We know the USSR forcibly relocated people to weaken any nationalism as in the Baltic states. Is that an issue that needs to be dealt with? And how?

I can’t see it. Why would Ukraine do it? What would they have to gain? They have enough on their plate in the east to even bother worrying about poking Russia in Crimea. The more likely scenario is Russia is trying to create a context for military action through framing Ukraine as the aggressor.

Why Ukraine destroys electricity transmission lines to Crimea? You really think that someone in Ukraine can block Crimea without government permission?

Acting like a dick and cutting the electricity is not the same as military incursions.

Honestly, let the Russians be

Who really knows?But any significant action is highly unlikely. On the other hand Putin has spent the last few weeks building up his forces on the border. Potential targets this time, shipyards and docks, powerstations and a land bridge. The bridge that they are supposed to be building is a much bigger challenge than they are letting on. Look up how the Nazi invasion of Poland began with a pretend attack on a German radio station. I think it’s as crude as that. Unless the international community wakes up from their summer holidays quickly, expect action within days.

Russia forces have been building up in the Crimea for months , then all of a sudden Russia says this, come on really.Hes talking rubbush and while the EU deals with UK and Brexit and the world watches the Olympics they’ll strike into the Ukraine. Russia wants a buffer zone and land bridge into the Crimea , instead of supplying over the Kerch straits.

Very strange story,this was on RT a day or two ago. Now there’s no sign of it. Maybe just too ridiculous for a British audience. UKDJ -you’ve either got to provide some facts or not publish.

Turns out that this is is an old story that seems to of petered out as the Russian’s had difficulty backing it up. I am still deeply concerned about Putins build up though.

Germany thwarted an armed Polish incursion into her territory in the early hours of the 1st of September 1939.

Taking the piss or Russian troll?

It was a Ukraine postman cycling over the border and firing a bow and arrow at a T90 tank. Russia will respond with full tactical nuclear missiles in self defence and invade further into Ukraine territory on the basis that a 75 year old ethnic Russian woman tripped over a raised pavement stone in Ukraine and needed assistance.

If there was an ‘incursion’ it probably wouldn’t be so modest in scale.

Just like before, Russia is getting it’s excuses in early.
If the Ukranian government were smart (and they aren’t), they should recognise this for what it is.