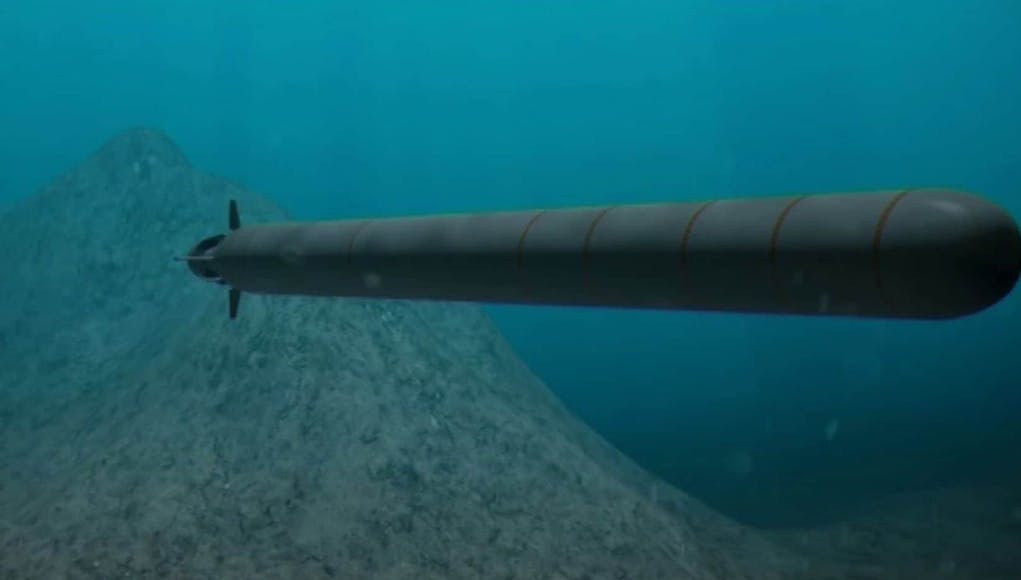 Russia’s Poseidon underwater drone currently under development will be able to carry a nuclear warhead with a capacity of up to 2 megatonnes to destroy enemy naval bases, a source in the Russian defence sector told TASS on Thursday.

“It will be possible to mount various nuclear charges on the ‘torpedo’ of the Poseidon multipurpose seaborne system, with the thermonuclear single warhead similar to the Avangard charge to have the maximum capacity of up to 2 megatonnes in TNT equivalent,” the source said.

With its nuclear munition, the underwater drone “is primarily designed to destroy reinforced naval bases of a potential enemy,” the source said.

Despite widespread reporting in Russian and Western media, we have had no official confirmation of this information but have reached otu to many sources.

As another source in the defense sector earlier told TASS, the Poseidon drone will reportedly join the Russian Navy under the existing armament program for 2018-2027 and will be carried by a new specialized submarine currently under construction at the Sevmash Shipyard.

Waste of time and money developing something like that. If they ever used it most of the developed world would be a nuclear wasteland within the next hour.

But that won’t stop certain people going on that the new carriers are just white elephants because Russia now has an underwater nuclear drone.

Could’nt you say the same about us renewing our nuclear weapons and the subs that carry them ?

No because they provide a strategic deterrent, which is the whole point of nuclear weapons.

Low yield tactical nukes are useless and will only escalate and situation to a society ending scenario, which is why they have never been used.

What if the Russians deny responsibility?

If a nuclear drone attached Norfolk Virginia, Russia can deny responsibility all it likes, it’s not going to stop WW3 happening.

These weapons are useless in a conventional world, no nuclear weapon is usable, that’s why the make a great deterrent.

what makes you think these aren’t a deterrent? Russia is just looking at ways of bypassing missile defence systems which are a threat to MAD if one side has an effective system and the other doesn’t

They are prepared to use small nukes and strikes first now. Thats just the reality.

What’s more intriguing for me is this “new specialized submarine currently under construction at the Sevmash Shipyard”.

Dont hold your breath on this or its sub carrier coming into service anytime soon. The Russian sub/shipbuilding and repair organization is a complete mess. They tried to upgrade subs and to some extent the surface fleet (Kirov’s) as a more cost effective method of improving the fleet. It has not worked. In many cases its taking 8+ years to refit units with others alongside for years waiting for their turn in the yard. The refits them selves are so expensive it would have been cheaper to build new subs. (SSGNs being a good example.) The current Russian nuke sub… Read more »

Excellent. But most observers (and or punters) prefer doom laden prose, not clear sighted analysis of realities.

They are just making it too dangerous to ever go to war with them. They know they can’t compete with the west across all areas so they are cleverly focusing on certain areas that can hold us at bay. Area access denial, electronic warfare and high speed long range missiles of all types. My concern is that they will be able to do anything they want, and we will not be able to militarily respond because of the risk from the range and size of the nukes they can threaten us with. We have to now find a way to… Read more »

TS, Spearfish can reach 70 knots if necessary but I’m not suggesting it would be used to intercept this thing. Other than that, I totally agree with you. This is a terror weapon. Just like putting Iskander missiles on the border with Poland and Lithuania. The strategy then is to say “you lift a finger against us and we’ll unleash these weapons. In the meantime, I’ll get on and do what I like cause I know you won’t dare start a war with me”. And there’s probably little we can do about it. But to an extent we (the West)… Read more »

No. The west didn’t move the NATO border. NATO doesn’t have a border. The independent and sovereign states of Eastern Europe exercised their right to apply to join a collective defence alliance. That is not up to the west or Russia. NATO is not anti Russian, in same way as NATO is not anti polish or Ukrainian. Ask why other former Soviet countries were eligible and it’s because they turned their back on competing with the west. Russia does not want to be a partner, it has chosen to remain a rival.

You need to ba able to look at it from their point of view.

Not debating the rights and wrongs of this Anthony. Just saying how they see it from their point of view.

Sometimes our hypocrisy over Russia is laughable.

This is an idea that itself creates a war situation. It is so aggressive it would be sensible to take out its base before it’s even deployed.

This is a very worrying development, its very much a first strike weapon, it has no other use than to put in the first punches and start a nuclear war. It looks like Russia is completely losing the plot in regards to how WMDs can be deployed and used.

Not losing the plot, changing the rules.

Andy changing the rules from a Geopolitical point of view generally leads to catastrophic conflict and millions dead before you hit a piont of rebalance. I infact the only major change in the “rules” that did not was the disbandment of the British empire, which remarkably only lead to the deaths in the 100s of thousands ( over a number of decades an via a number of regional wars and minor rebalancing of borders and filling local power vacuums). I fear that Russia 1) rejecting the international consensus on the use of WMD and B) Using its advantage in WMD… Read more »

Russians can’t compete with the west technologically so the only choice they have is to put a nuke on everything. Its beyond pathetic

It can be negated though if its sub is taken out.

I have read of a range of thousands of miles??

If it’s a nuclear powered drone with intercontinental range why does it need a carrier? I’m calling bull on this. Maybe they’ve developed a reactor small enough but surely would end up costing as much as a ssn.
Still if it’s true we need to counter urgently

And if launched from thousands if miles away how early would they need to launch it?

It never gets past development with Russia ….it’s always development and not reality ..rt news again ..

Meanwhile, three member states of NATO have nuclear weapons systems that can take out all of Russia’s major naval bases and much more. Russia could use their drone, as part of a national suicide strategy.

This is like all Putin’s ideas; a pathological and consequently highly dangerous idea. When first touted we heard this was nuclear powered and therefore could range world wide. Would he then be launching this with no ability to recall days or weeks in advance? Advance of what? Now we hear it has a special sub carrier vessel; presumably to bring it closer to its target and give some ability to recall. The likely consequence of this abomination is to bring Armageddon several steps closer. One thing is certain if Russia, Terrorists or indeed Anyone lets off a nuke in a… Read more »

If only Russia could be just as inventive in developing good businesses, companies and be a successful country in trade etc. I really feel all these weapons, missiles, ships, planes which look impressive, fast, hard to beat etc, just hide a Russia that is none of those things. Could Russia well do better concentrating on other things?

This weapon is of very limit use it would have to get into a bay or harbour to prevent unintend consequnces through the possbility of a Tsnuami speading out into the open ocean. Tsunami’s travel out 360 degrees and depending on coastlines water depths etc could have a worse impact on a completely different continent due to wave amplification. I would think as things hotted up 2nd world war torpedo/sub nets would easily prevent this getting close to a based. So Russia would be risking massive collateral damage to other nations if this was used. Lastly this weapon probably contravenes… Read more »