The four shipyards invited to submit detailed tenders are based in Poland, Romania and Turkey.

The new ships will be the first major order by CMAL, which procures vessels for CalMac, since MV Glen Sannox and her unnamed sister ‘Hull 802’, which are still under construction at the Ferguson shipyard.

The BBC report here that Glen Sannox is currently due to be delivered in the second half of next year, more than four years late, with the two ships costing the taxpayer more than double the original contract price. Additionally, “problems with the earlier order dragged the yard back into administration in 2019 and since then it has been wholly-owned by the Scottish government, which also owns CMAL and CalMac”.

Ferguson Marine had earlier joined a group of defence contractors bidding for the new £1.25 billion Type 31e general purpose light frigate programme, due to delays with the two vessels they’re building they are no longer able to take part and instead the new frigates will be built entirely at Rosyth.

🚨 NEWS | Scottish Government owned Ferguson Marine shipyard has missed out on an order to build two new ferries for Scottish Government agency CMAL. The four shipyards invited to submit detailed tenders are based in Poland, Romania and Turkey. pic.twitter.com/CPqNFAeHsN

In 2018, new Cabinet Secretary for Transport Michael Matheson said it had been confirmed that the ship was to be delivered in June 2019, followed by two months of crew familiarisation and sea trials. 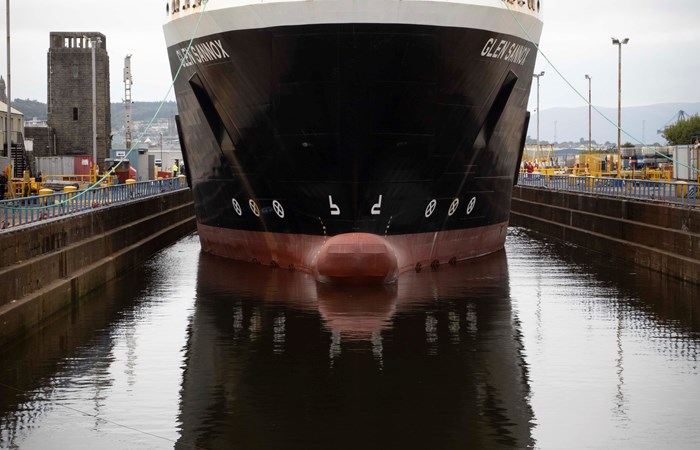 Further dispute over the contract overrun led to the shipyard going into administration and being nationalised by the Scottish Government. A report produced after nationalisation indicated that Glen Sannox should be handed over to CMAL in the last quarter of 2021 and that completing the two ferries is likely to increase the total cost to over £207M.

In 2020, Ferguson Marine contracted with International Contract Engineering, a marine design consultant, to revise the design and outfitting of Glen Sannox in advance of her eventual delivery.

I guess not so easy to turn around, and lot more costs to continue with them. But you are in government and can take some risks – I don’t get why they don’t they support Scottish, why not a UK yard instead going abroad. And then can’t say the UK government is not support Scottish ship building industry (despite a lot of it being there in proportion to rest of UK) when the Scottish government itself is not!

I’m stunned at the hypocrisy of the SNP.

They never fail to deliver, unless its a ship building contract!!

Ferguson Marine would struggle with building a coracle.

……and , the contract to refit the CalMac fleet has gone to an English yard, Cammell Laird .

What can I say, battling predictive text is difficult at the best of times but today I’m battling a cold too 🤷‍♂️

The ships don’t look to bad to be fair, 5hey look nice and modern and sleek, minus the bulbous bow… and wasn’t it the green propulsion system that helped screw up.. so I bet it was the SNP and not the workers that messed up ROYALY.

The Propulsion system was only part of the problem, lack of a covered slip to build them on was another. They are massively over-spec for the route due to out dated facility requirements. These vessels are being built with full restaurant and bar facilities plus crew accommodation. Most passengers don’t want full restaurant and bar facilities being mindful of drink drive limits and preferring café level facilities selling coffee and a panini. For the short duration of the routes live onboard crews are unnecessary as they can live in the local area to the harbour they operate out of. All… Read more »

I thought you were joking about the facilities.
Who signed off on that and what was wrong with them? Maybe we need the Norwegians to take over the yard, they seem to manage.

They banged on about the propulsion system and how it was cutting edge first of a kind and so challenging but turns out other countries have built similar ships without the same issues ie Norway.

Well they made a mess of ferries #1 & #2 it would be very hard to justify giving them #3 & #4 as even #1 has not been accepted. I’m sad that Fergies could not step up to the plate but there is no point in giving them more money/contracts when they cannot deliver the goodies. I am all for supporting local workforce where it can deliver in a cost effective and timely manner. They can’t. That is my worry with giving H&W Belfast a piece of the solids contract: they have not built anything for decades so it is… Read more »

I do wonder how this company will ever get more ship building work with the total decimation of its reputation, these ferries have been more than an embarrassment, their attempt to build that bulbous nose would have embarrassed Snozzle Duranti.

Probably the same chance as Swan Hunter had after the Bay Class debacle.

NO A found the Swans cost fair. There were constant MoD changes that led to Swans ending up as they did.

As a Tynesider it was sad to see shipbuilding end on the Tyne, but Swan Hunter screwed-up big time.

Oh dear, how will they spin this one?

Nationalised shipyard misses out on contract with nationalised ferry company

You couldn’t make it up, no one would believe you…

No doubt they will find a way to blame Westminster, as the nationalists usually do when they screw up something.

“The four shipyards invited to submit detailed tenders are based in Poland, Romania and Turkey.”

Surely that’s got to go viral on twitter, oh wait its not fake news…. so it won’t

A foretaste of the many many problems that would arise should the SNP get their incompetent hands on Independence.
Whether it be the economy, education or defence procurement.

I can see the 4 shipyards that are invited to tender but does anyone know who the other 7 that submitted are? Fergus is one so 6. Was there any uk yards?

Not Sure Ferguson are on the approved contractor’s list anymore, and with the SNP ordering its Steel for the next 25 years from a bankrupt company, i wouldn’t trust them to build a pedalo

When you consider the issues procuring the new RFA support ships it’s clear many yards across the UK just aren’t competitive. The bidding process isn’t a charity, these aren’t military spec so don’t need to be built in the UK, and frankly it just shows the sad state of the economy that it’s cheaper for the taxpayer to outsource this kind of work.