China’s second Type 075 amphibious assault ship is expected to be launched in Shanghai on Wednesday afternoon, according to local media.

On Monday, the Maritime Safety Administration of China announced that a new ship built by Hudong Zhonghua shipyard will undock from 1:20pm to 2:50pm. A water area of 1,500 meters long and 350 meters wide near the dock will be restricted for navigation, the release said. 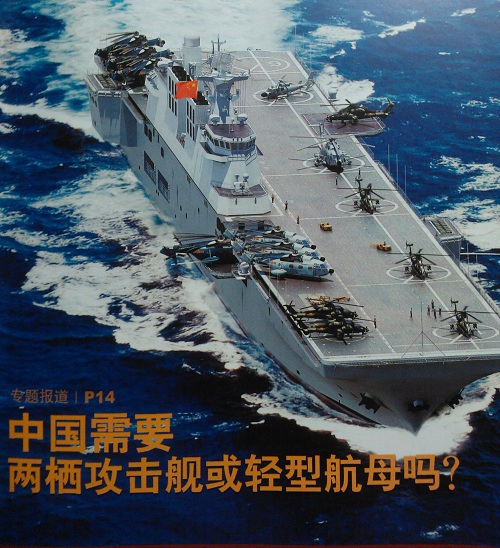 Although the notice did not identify the ship, local media are reporting that it is expected to be the second Type 075.

In term of size and tonnage, Type 075 is estimated to be larger than the Australian Canberra class or French Mistral class and second only to the U.S. Navy’s Wasp class and America class on the world stage.

Last month, a fire broke out on the first in class, you can read more about that here.

This just shows China is intent on invading other countries, what else do they need them for?

Any ideas from the Trolls!

Bit weird, why do other countries have them then ?

In Britain’s case, to defend Norway if it gets invaded by you know who.
And to recover our over seas territories if they get invaded. E.g. Falklands Islands.

Ah, so the goodies can have them but not the baddies. Right…..

Why would you want to reward a baddie?
Is that what you do!

You do realise I was mocking with the whole ‘goodies and baddies’ stuff aye ?
I hate to break it to you mate, you might want to sit down for this but….. life isn’t that simple.

I did Not realise you were mocking the issue.
I thought you were an anti western troll challenging the consensus of the posters?

You didn’t realise that I was mocking when talking about ‘goodies and baddies’….. wow ! Defo best to assume I’m ‘anti Western’, you need to keep an eye on those lads. Blaggards and stinkers to a man. What what. OR maybe I just don’t see things as simplistically as you do. Now as I recall, our allies and ‘super special BFF’s’ the good ol’ US of A have invaded places and they have a shed load of paraffin parrot carriers, does that make them ‘goodies’ or ‘baddies’. They’ve definitely not saved them for driving the commie hordes out of Norway… Read more »

We have such a thing as International Law in our World. Compose by International bodies like the United Nations. The United States has taken on a role since WW2 as a World policeman. Britain has also taken on a similar role, to lesser extent.

Yes, the USA has invaded countries in the past because the USA has perceived that a country has broken International Law in a major way.

So if China starts to use those new amphibious vessels without consulting the United Nations security council, it could mean big trouble!

You mean like when the US invaded Iraq ? Aye, the UN were delighted with that one. You should maybe look into it, about the only bit you have right is the “because the USA has perceived that a country…” is good enough for them to do what they want. Grenada springs to mind….

Wow, look at that, I must be one of those anti Western trolls after all, ha.

It is a fact of life that a World Policeman or Policewoman has emerge to enforce International Law, just has it has happened in national societies to enforce the law.

So, yes if you don’t the current World order, it does look like you are a troll and you would prefer to live in authoritarian country like China.

It doesn’t have to follow that a “World Policeman or Policewoman (how wonderfully PC)” has to emerge, you could argue that the whole point of the UN is so that there isn’t a need. Indeed part of their ‘rules’ or whatever you want to call them is that countries SHOULDN’T sort out there differences militarily. Can’t believe I’m having this debate with someone who is so quick to deploy the ‘if you don’t agree with me you must be one of THEM’…. never mind the whole goodies and baddies stuff. Anyhoo, to move the debate on, should China (boo hiss)… Read more »

So in what fantasy world where the United Nations passes resolutions, and all other countries abide by them without question? In the Cold War the USSR enforced the rules in is own sphere of domain.

In the present multiple polar world, the rest of the world requireds an world Policeman/woman, to uphold those world rules, or otherwise no point in passing them, just like in every day society. Of cause, I expect a response of black is white etc from a troll!

So good luck then, to your life of law breaking!

First off, you really need to look into what an online troll is. FYI, its not someone who sees things differently to you and its probably best not to start off slating anyone who does as a troll before a ball is kicked. So is it safe to assume you’re cool with the big countries pushing their will on the wee ones by force then, whether that’s the former USSR (now Russia who have carried on the trend, ie Georgia, Ukraine) or the US. We’ve now got the new kid on the block of China who are wanting to be… Read more »

You Are very much A Troll, because you winding me up over the issue of World Law, rules and enforcement.
Promoting your fantasy world of a No rules based World order and No enforcement in every day society.
You provide false facts of what the UN Security Council is about and you say it’s members are illegitimate and self appointed and resolutions are non-binding.

You talk complete Hogwash, in a most Tomfoolery Way!

You are like a criminal laughing in my face!
A very big Windup Indeed!

It is You that’s the Bully!!

Dear oh dear, wipe away the tears and snotters and have another look at what I’ve written. Then take a couple breaths and compose yourself. Your post is the first mention of the UN Security Council. As for fantasy worlds, you’re the one who is fond of the ‘goodies and baddies’.

Maybe time to up the meds mate.

Thanks for your solidarity Peter!
I agree with you!

Neither of us had previously mentioned the UN Security Council so I’m curious what “false facts” I’ve provided.

As for ‘winding you up’, you maybe need to not take things online so seriously. Not that I see myself as a troll but as per your opening statement, you invited trolls to comment so um, I’m a little confused here.

It’s not that complicated either. It’s pretty straightford to question motives of another country and see whether it conflicts with your country’s agenda. In the case of Taiwan and the Falklands that’s easy.

Yeah, that’s all still very black and white. Of course you can question other countries motives for stuff but at the end of the day, what do you propose doing, ‘confiscating’ their shiny new Helo carriers ?

One man’s Terrorist is another man’s freedom fighter and all that.

No Andy we should encourage the baddies to have them too – then we’re a lot less safe.

China has no legal overseas territories.

Please tell us, which country is China going to invade?

The CPC would say that Taiwan is a province.

Taiwan needs to stop claiming it is the real China, and become independent with a new identity.
The peoples of Britain and the USA speak the same language, but have a different identity.

It would say that Tibet is a province also. Different language, history, religion. The Han empire was expanding for centuries, and still plans to.

Any small island or atoll in or around the South China Sea.

Taiwan. Would be classed as a civil action… Its still China… (I know it’s not but the CCP think it is) Japan. The old enemy. South Korea. Why not, it was Chinese once… (ancient claims are ok, example, the South China Sea) North Korea. Why not it was Chinese once, plus it could be done as a humanitarian action to liberate the oppressed people. Philippines / Vietnam. Because they ”own” territory that China want. India (From Chinas new port in Sri Lanka). economic rival. Sri Lanka. If they fail to hand over the new port that was built by the… Read more »

Anyone they wish to.

These ,075 look more like Asualt Landing Ships than aircraft carriers
I would guess China still has its eye on their belt and roads project, the ALS a back up for resources on land.

A bit of industrial espionage? These ships look remarkably like the Canbara class.

They appear to be a mashup of the Wasp and Canberra.

The article is wrong though…the Italian Trieste is bigger as well.

No one remembers the italians.

Mark B
Reply to  Mr Bell

Not built to be pretty!

shows how China came from nothing to having everything through cheap labour,just bloody annoying that idiots in westminster are still giving them foreign aid money,to help them pack in smoking,along with a cheap postage system.

I think they cut a lot of corners to keep the price down. Still the size of their surface fleet dwarfs that of the UK. In fact it dwarfs the entire EU surface fleet. No wonder Australia is ordering 12 subs and 12 hunter class frigates.

With world economy tanking and Australia following suit we will be lucky to afford 9 we have ordered , there is time schedule for 11 with the hope NZ options in or agrees to a subsidized purchase but kiwis are unreliable and from their attitude more probably a future Chinese lackey then Allie .

Seriously? The ridiculous irony of it all is that these boats are being built with Australian raw materials. Sold to the Chinese and whose revenue is then spent on Canberra class boats.
If there are are any lackeys in the SW Pacific then I think you will find they are a little further west of NZ and marching to the latest Washington beat.

Only a Chinese Lackey would voice concern on staying the true course with America .

I’ve no time for China, or rather, not the Chinese people but the regime. I don’t trust them and I wonder if we see any investment in British Steel? Aparently the bosses have drunk with the locals in Scunthorpe and been friendly, but I hope this is not another asset stripping exercise. No more than ever, we need to be making more stuff here in the UK.