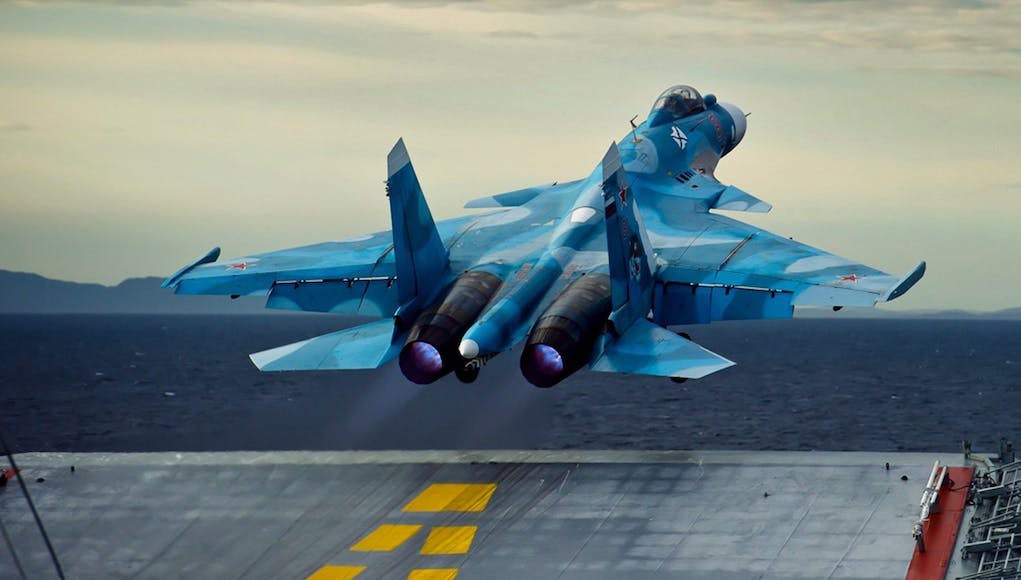 A Su-33 fighter jet, based on the aircraft carrier Admiral Kuznetsov, has crashed into the Mediterranean Sea after returning from a sortie over Syria.

This crash is the second loss of an aircraft from the Admiral Kuznetsov since it arrived off Syria last month after a Mig-29 crashed into the sea in November while attempting to land.

In October, the Admiral Kuznetsov, accompanied by seven other Russian navy vessels including the nuclear-powered battlecruiser Pyotr Velikiy and two Udaloy class destroyers, set sail from Kola Bay for the Mediterranean. The deployment was reportedly moved back to October due to a lack of carrier-qualified pilots for the new variant of the MiG-29 adapted for carrier operations, the MiG-29KR.

The MiG-29K is heavily modified for naval use compared to earlier aircraft. The airframe and undercarriage are reinforced to withstand the stress experienced upon landing. Folding wings, an arrestor hook, and catapult attachments were added for carrier operations; the aircraft’s undercarriage track was also widened.

The Admiral Kuznetsov reportedly deployed with 15 fighters and more than ten helicopters.

“It is far easier to stop and then land than it is to land and then try to stop” – John Farley, Harrier chief test pilot.

At least the Royal Navy won’t have this problem – not enough aircraft!

Apparently the arrester wire snapped, and the pilot managed to eject safely by the way.

Is this indicative of maintenance issues in the Russian navy or does this thing happen reasonably often on other navy’s carriers and simply not get reported? I suppose another possibility is a design issue given that these Mig-29s were specially adapted for the carriers. Maybe weight and/or thrust is too close to the tolerances of the arrester wire.

Given the overall state of the Russian navy with most of it’s ships obsolescent and badly maintained I think we can assume that is the problem. All the best to the pilot though.

I suspect an issue that’s come up now as this is the first time they’ve used their CV for high tempo ops. Their SAR drills seem to be good though..

I’m glad the pilot was ok, as a pilot and flt deck guy.

Did I read that continuous carrier operations were affected by overall lack of top speed of the ship?