The MV Nave Andromeda has been seized by stowaways off the Isle of Wight.

Reports suggest crew are sheltering on the ship, but police have not confirmed these reports.

BREAKING: A major incident is underway in the Solent off Sandown this afternoon (Sunday), with reports of an attempted hijacking of a ship.https://t.co/EU2tvzCZ5R #iwnews #solent #naveandromeda

The oil tanker was due to dock in Southampton earlier today. 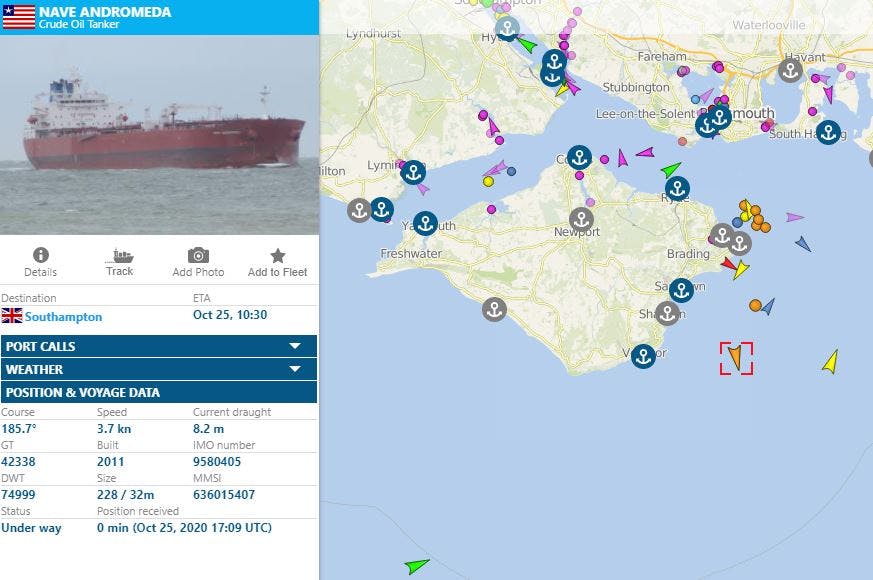 Hampshire police said in a statement:

“We are aware and dealing with an ongoing incident onboard a vessel which is situated south of the Isle of Wight.”

“We are currently assisting Hampshire Constabulary with an incident on board a vessel situated off the Isle of Wight. The search and rescue helicopters from Lee on Solent and Lydd are in attendance.”

“We are aware of an incident onboard the Nave Andromeda off the Isle of Wight and are in contact with the relevant authorities. We believe it is likely to be related to stowaways on board but are awaiting more information.”

A 3-mile exclusion zone has been put in place around the vessel.

Looks like an RAF Chinook has already gone into Poole to pick them up. pic.twitter.com/zignmMueFq

If it has been seized, ideal for SBS in role MCT Sqn, with Wildcat MCT flight.

Sky News just said that a chinook is on route. Expect SBS board & search op once the light has closed in, which is about now. Would be good if we had a maritime platform nearby but sadly nothing around.

Well, it’s a step up if illegal economic migrants are now using oil tankers rather than small boats and dingys to get here!
I hope for their sakes they surrender sharpish.

I think the vessel was coming from Africa. So i guess they figured to just cut Europe out of it.

I wonder if any Boko Harem members are onboard. Maybe a British teacher will be decapitated by a “refugee” as recently happened in France.

Nav light now on so I suspect the situation will de-escalate rapidly. All depends who is on board. If just some immigrants (probably) it is simple. If it is Islamic terrorists intending to explode 42,000 tons of crude in HMB Portsmouth then the gloves are definitely off.

From what had been reported it doesn’t seem the the crew have lost control. Just that the stoways are lose on the vessel, except the bridge. Although given what happened last time such an incident happened I’m surprised the SBS haven’t resolved it yet.

If it’s simply loose stowaways that certainly sounds like a job for the police.

Well their essentially commiting a hijacking and it’s made worse that the vessel has come from Nigeria. High threat of extremists. Especially if they manage to get over bored and reach the shores at which point they could disappear.

Once arrested they can claim asylum. It would take months and millions of tax payer funded lawyers fees to dispute their right to political asylum and even if placed for deportation practically impossible to implement.

Yes but they might be all gay and suffering homophobic discrimination in their own country? How can you sleep at night?

We live in a democratic country that has rule of law, if we don’t follow our law when it suits us we end up like the US, or way worse like what happened in the 40s.

Easy. I am a complete rotter!

All over. Job complete.

2 and 2 was same setup as last time. I wonder what the wildcats bring that the Merlin’s dont.

Would think the Merlin’s could provide fire support but I guess if the platforms are available and what not use.

Also why not 4 Merlin’s, that would give more lift options should it be needed or should one of them have issues.

SF snipers Steve. Wildcats on overwatch while a Merlin or Chinook fast rope.

Still doesn’t explain the 2 and 2. Why not send 4 Merlin’s with the overwatch including extra troops if needed. I am just curious what the wildcat brings to the party over the merlin. Maybe its quieter. What i thought they did with these types of exercises was the first helicopter does the fast ropes whilst the 2nd providers overwatch and then they switch, as 2 at same time it seems is considered too risky. I guess with special ops team the focus is more on speed than safety. I guess it could just be optics, if the info is… Read more »

Likewise, 815NAS MCT Flight has, I think, a pair of Wildcat. Likewise the Wildcat SFF of the AAC.

I think most assets regards airframe numbers are the 7 Sqn Chinooks, who would have more than 4.

Was another two helicopters of SBS on standby, one filled with frogmen in case mines had been attached below the waterline.

Bloody pirates! I hope they get a taste of good old fashioned maritime law, a quick hanging or walking the plank

Stowaways, ships crew had known about them for days and supposedly they only became violent when the crew attempted to lock them in a cabin ahead of entering port.

Doesn’t necessarily mean they were not stowaways, the crew might have discovered them mid voyage and then tried to deal with them without breaking their delivery contract. Although more likely they took a backhander at port to take them on.