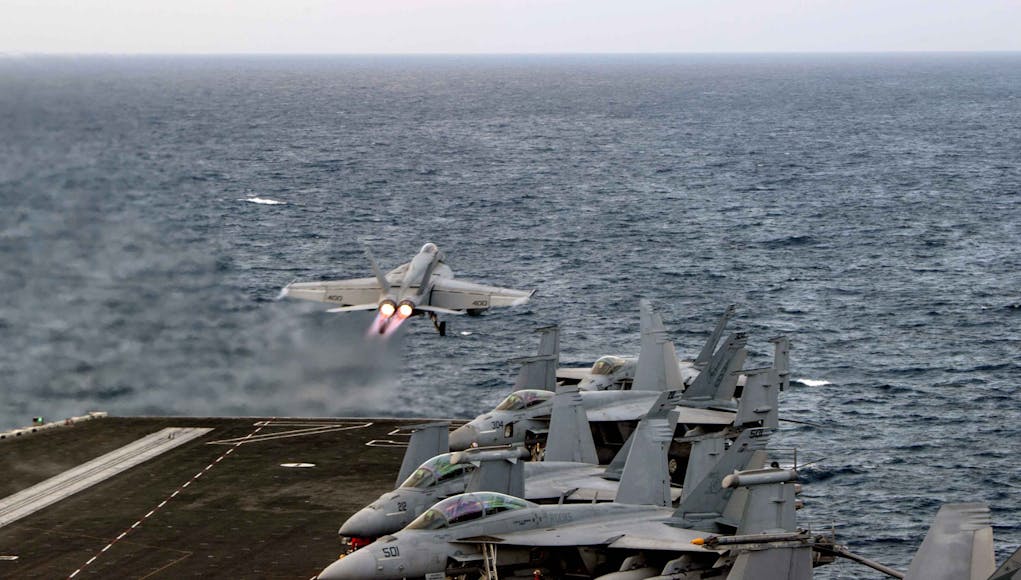 Supercarrier USS Harry S. Truman conducted maritime security and flight operations in the US 5th Fleet area of operations this week, continuing carrier presence in the region say the US Navy.

The US Navy say that Truman and its accompanying units provide a range of flexible capabilities in support of theater security cooperation and maritime security.

“The hard work of this crew during recent operations in 6th Fleet have prepared us to be here,” said Capt. Hakimzadeh, Truman’s commanding officer, in a release.

“I am proud of this team, and we are ready to operate in 5th Fleet.”

Since leaving homeport, Truman accelerated its passage to US Central Command (CENTCOM) to support current and contingency operations, protecting US forces and interests in the region.

“We are a flexible, adaptable and persistent force, able to perform any required mission in U.S. 5th Fleet.”

The HSTCSG is deployed in support of naval operations to ensure maritime stability and security in the region, which connects the Mediterranean and the Pacific through the western Indian Ocean and three strategic choke points, say the US Navy.

So basically just hanging out in the med, in case the 5th fleet need her.
An entire CSG, just in case it might be needed for some contingency.

Mark B
Reply to  Andy

Is that not the basis for all forces from NATO countries almost all of the time Andy? Just swapping places with the Abe Lincoln?

Andy
Reply to  Mark B

Yes, but this is readiness beyond anything isn’t it?

I did notice suspiciously that NATO was not mentioned by anyone in the article. Though of course they would be available for it.

Mark B
Reply to  Andy

Keeping a carrier on station is just showing resolve to keep those shipping lanes open.

I think this is merely an informal coalition isn’t it?

Are you suggesting the American’s might have something else in mind?

NO! She is now in the Gulf. The Abraham Lincoln CSG left the Gulf a week ago, and is now near Singapore.

I wonder how many aeroplanes and choppers she has onboard, yanks always say 90, but they don’t always go with that number contrary to what most people think. Sometimes large numbers actually hinder the speed at which sorties can happen ect.

It is great the UK will have a Carrier battle group once again, but the yanks just take it to another level.

Yes the Americans clearly have that little bit more functionality but I am a great believer that we could and will plug many of those gaps cheaper and better with a little ingenuity.

Yeah I agree mark, the British millitarys famed for it.

These deployments are really just those of the de facto Global Bobby on his beat checking things out, much as we did prior to WW2. I would venture to suggest that even those on the other side recognise America’s role in this respect and even if they don’t like it, won’t challenge it. To put a perspective-imagine if China or Russia sent a large Task force to conduct war games in the English Channel or off the coast of say, New York. Outrage and alarm bells would surely follow.
Not judging, just saying…

We “join in” to war games when we are asked… e.g., Estonia and S.Korea. We don’t impose them on anybody. Good luck to China and Russia in trying to run a war game outside of their waters. We no doubt would enjoy having a good laugh at them.

Hi Trevor. I see Iran,China and Russia have started a 4 day joint naval excercise in the Gulf and Indian Ocean. Much of this on all sides is just posturing along with some real material interest but the chances of an accidental encounter escalating are high with the US Fleet in the region.

Apparently two tugs have been seen leaving the Russian port of Severomorsk.

We are sending SD Tempest to escort them just in case one breaks down!

A contribution for a quiet day.

The USN is bringing two honored names back into the fleet. These Block V subs will be the baddest things in the Pacific as I suspect they will be homeported at Pearl.

The emotional equivalent of the RN bringing back the PoW, Repulse, and Hood names. On a side note, I’ll be on my yearly trip to Hawaii next month and ,as always, will pay my respects at the Arizona and Utah memorials.

Thanks for the very interesting link Helions. I will forward to my good friend who is ex USN having served for many years as a Chief Engineer on Nuclear subs. Despite suffering from advancing Parkinsons,as soon as we start talking matters Naval, he comes alive and chats with a knowledge and memory that is completely unaffected by his condition. There must be a lesson in that for those researching the disease. On subject as you know we have another PoW and had the Resolution Class sub HMS Repulse laid up in the late 1990’s. HMS Hood was an iconic name… Read more »

My regards to your friend geoff. This is related and interesting… Looks as if the USN is trying to get more businesses into its ship repair program. They’re badly backlogged and there are few current players in the field. Another sign that the service is getting ready for another potential major conflict in the region IMO.

Thanks Helions and all the best for 2020

Abe left the Gulf a few weeks back. She Had a week stop in BHR prior to leaving. We had a few small jobs to do on it prior to her leaving. .
It was a bit busy down American alley though. A couple of thousand on shore leave makes things a bit busy.