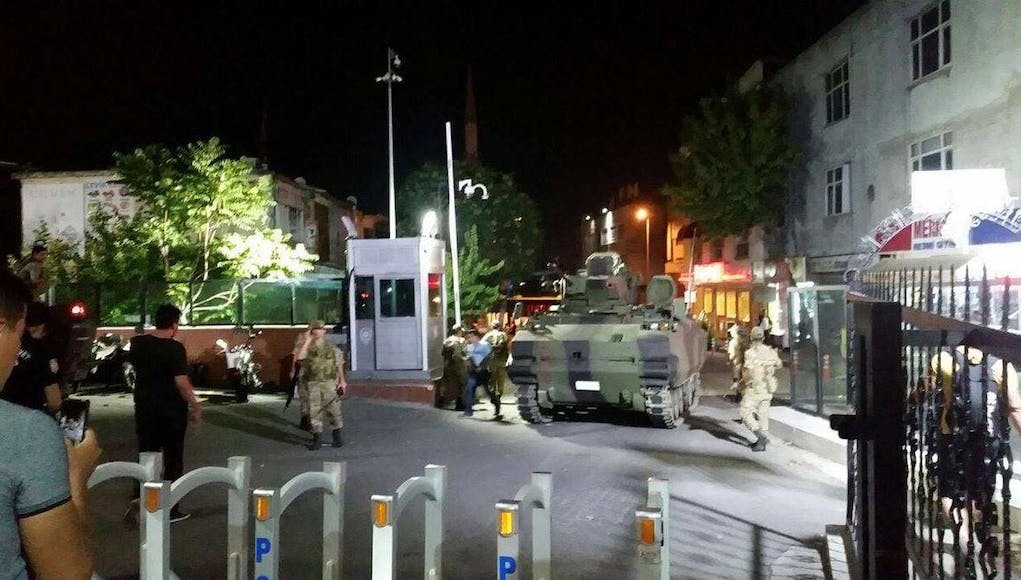 Low flying jets and gunfire heard in Ankara and bridges across Bosphorus in Istanbul closed as parts of Turkish military attempt to seize power.

It has been reported that Turkish Prime Minister Binali Yildirim said those responsible for what he described as an attempted coup by a faction within the military would pay the highest price.

“Some people illegally undertook an illegal action outside of the chain of command,” Yildirim said in comments broadcast by private channel NTV. The government elected by the people remains in charge. This government will only go when the people say so.”

Reports are also coming in that the Internet has been closed down in Turkey as a military coup gets underway.

Gabriel Turner, 23, a management consultant from north London, on holiday in Istanbul told The Telegraph:

“Earlier today there were police everywhere. I thought that was normal but the two Turkish girls I was with told me  it wasn’t normal. We were walking around the centre of Istanbul, at the Grand Bazaar there were police at every entrance and exit with lots of guns.

“A police helicopter was flying very low  at sunset, it was about 8pm. It looked like it was searching for something. Later on, at about 10.30 I was in Karakoy, a bar area in the city centre and everyone started looking at their phones. A man who owns the bar told us that the army are taking over everything.

“Then we walked down towards the a quieter area by the sea. While we were walking, my friend said the army had closed brides across the Bosphorus. We could see army helicopters in the sky.

“We went inside a cafe and everyone was on their phones looking worried, texting. Lots of people were running to catch a ferry – because the bridges were shutting and people wanted to get home. Then policemen came out of the ferries on their walkie talkies, looking very alert.”

The mayor of Ankara has reportedly called people out into the streets in defiance of a curfew, suggesting trouble could erupt imminently.Traffic has been stopped from crossing both the Bosphorus and Fatih Sultan Mehmet bridges in Istanbul.

Communications in the country are reportedly down.

With reports that social media is down, TV is down, this looks well planned #Turkey

The Turkish Military now claim to control the country.

Jets have been seen over the capital.

#Turkish military jets flying over Istanbul city for the past hour. pic.twitter.com/gXxqTGaANS

Tanks have now been deployed at Istanbul Airport.