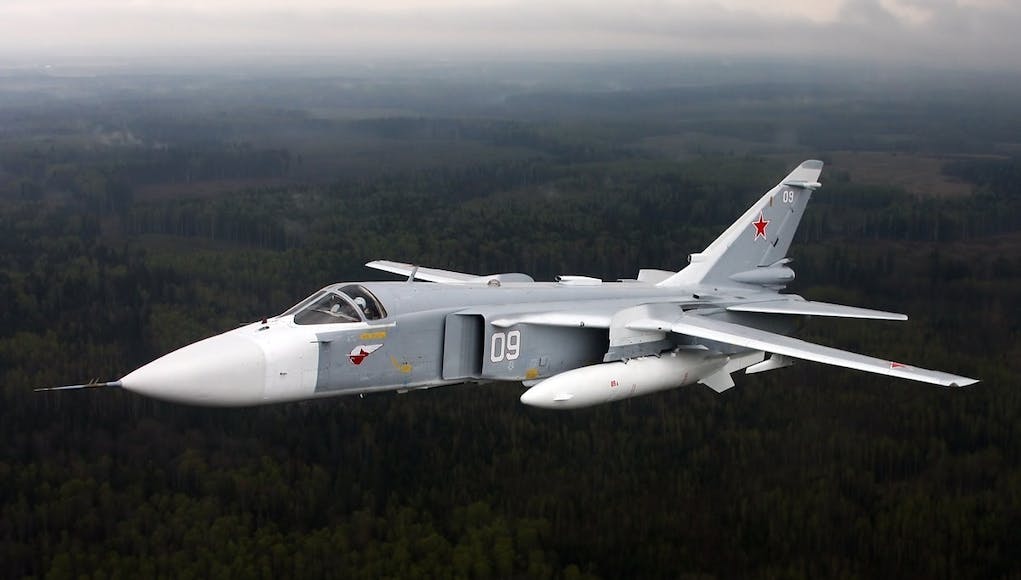 Turkish F-16’s have reportedly shot down a Russian Su-24 (pictured) this morning near the Syrian border after it violated Turkish airspace.

Turkey shot down the jet after it failed to heed the warnings within the rules of engagement while Russia are claiming it crashed due to gunfire.

The jet crashed into tents in Latakia’s Yamadi village near the Syrian border, according to local media. Two pilots were seen landing with the aid of parachutes, reports claim.

Russia maintains that the Su-24 crashed in Syria not Turkey and due to gunfire from the ground however footage posted by the state-run Anatolia news agency showed plumes of smoke rising behind a mountain a few kilometres inside the Turkish border.

The Russian Defence Ministry is quoted as saying:

“The plane was at an altitude of 6000 meters. The fate of the pilots to be confirmed. The flight was over the territory of Syria.”

The Turkish Air Force operates a combined fleet of around 240 F-16 Block C and Block D.

Turkey used its F-16s extensively in its conflict with separatist Kurds in Kurdish parts of Turkey and Iraq. Turkey launched its first cross-border raid on 16 December 2007, a prelude to the 2008 Turkish incursion into northern Iraq, involving 50 fighters.

The aircraft are tasked with protecting Turkey’s 500mi border with Syria, after the RF-4 downing in June 2012 Turkey changed its rules of engagements against Syrian aircraft, resulting in scrambles and downings of Syrian combat aircraft.

Russia has carried out hundreds of air strikes in aid of the Assad regime since the beginning of October, a move criticised by Ankara as a “grave mistake”. Although Russian air strikes are intended to be targeting Islamic State it has been noted that the majority of targets are in rebel held areas of Syria with “little or no” Islamic State presence.

Well done Turkey! At lest they have got the balls. That will teach Russia to stop violating Turkish airspace!

We don’t know for definite that is what happened yet.

And Turkey violate Syrian airspace all the time…

Syrian airspace is not Russian! That would be for the Syrians to deal with.

Well rules are rules so fair play to turkey for up holding them! Russia have been doing it for months!

They also violate Greek airspace, that’s been going on for a long time too

USA violate every single country airspace. According to you every country has right to shot down ?

Yes that’s the rules for military aircraft without consent! Especially if they are armed with missiles!

And it falls down to Syria. I think Turkish aerospace must be on Syria   :p

Or maybe Russia was blowing up those trucks full of cheap oil that Turkey is buying from some of the more nafarious folk in Syria, and Turkey didn’t like it…

If the SU-24M was inside Turkish airspace wouldn’t the step after hailing it to escort it away? Just shooting down a stray bomber that is obviously little threat to Turkey seems extreme. Ankara playing games. Most likely Turkey is one of those countries that are in effect financing Daesh and would rather NATO breaks away from the agreement of cooperation made at G20. Turkey are a threat to stability in NATO.

When going down a border, don’t sit on the Fence(r)?

Well they’d be stupid to do so. Turkey isn’t Ukraine and didn’t the Americans have F22’s in Turkey? If the Russians are stupid enough (and i wouldn’t put it past Putin) to try that then the Russians may find they’re losing lots more aircraft. Putin has put himself in this situation!

Doubt it because of the consequences it May cause, but shooting a Turkish aircraft over Syria? They would claim that fair game maybe

Somethings not right with Turkey. Russia are bombing Isis and Turkey are fighting the Kurds. The only real ground force fighting Isis. Baffling

Turkey do this to Greece all the time…….. http://www.businessinsider.com/turkish-and-greek-jets-engaged-in-dogfight-2015-7

Greece and Turkey are NATO nations, maybe something to do with it?

The Greeks have complained so many times about it, happened a lot over the years

Bad move by turkey let’s just hope the russians dont take drastic action over this or we could end up in a proxy war.

What’s the problem here?.. Turkey warned Russia in the past about this, and they said ok it won’t happen again, they were repeatedly warned this time too.. Putin thinks he can do whatever he likes, now he will think twice, Turkey.is entitled to defend it’s borders robustly.

If any country flew ARMED fighter aircraft into Soviet Russian air space, the Soviets would shoot it down without question; Putin learns a lesson here.

Rather unfortunate to say the least.

Terrible if the crew were murdered according to some reports.

However it seems some here have forgotten the Korean airliner the Russians shot down in the 80s.

All access to the Black Sea is via Turkish waters which they can close at their discretion. A major problem for Russia for at least 200 years.

According to Russian Defence minister only the pilot was killed, navigator rescued but one Russian marine died during rescue attempt.