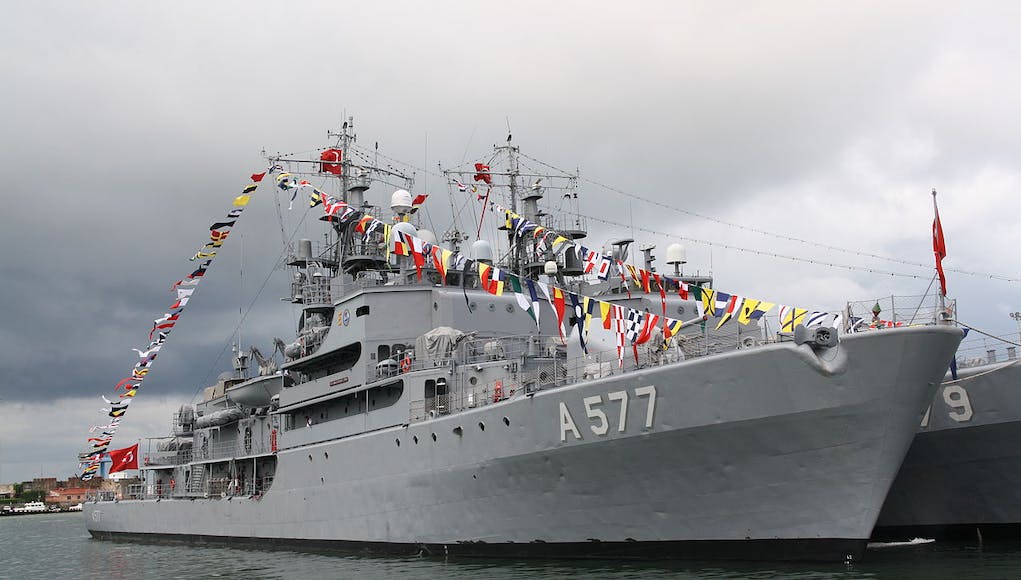 Turkey has taken over the command of Standing NATO Mine Countermeasures Group Two (SNMCMG2).

The virtual Change of Command was held on 19 February, led by Vice Admiral Keith Blount, Commander of Maritime Command, and the ceremony took place in Istanbul, Turkey with the participation of core personnel of the flagship TCG Sokullu Mehmetpasa, TCG Ayvalık, and ESPS Tajo.

NATO say that SNMCMG2 will be commanded by Turkey for the fifth time since the inception of the group.

“Between 20 February-16 April 2021, the group will participate in mine warfare exercises in Greece, Italy and Romania. MCM vessels from Bulgaria, Greece, Italy, Romania, Spain and Turkey will take part in SNMCMG2 at different periods. The main task of the group is to make seas safer for all NATO Allied and partner nations, while sailing together in unity.

The force will serve in COVID19-free bubbles, not mingling with outside members and without shore leave during port visits, allowing the Force to keep its level of readiness. SNMCMG2 is one of four standing forces that comprise the maritime component of the Very High Readiness Joint Task Force (VJTF), which is part of the NATO Response Force (NRF). To respond to contingency situations, additional forces can be added to these groups, with the NATO command staff on board and the ships of the Group as the nucleus, capable of providing timely support to NATO operations.”

Commander of SNMCMG2, Captain Yusuf Karagulle, of the Turkish Navy, said during the Change of Command ceremony via video conference:

“I am honoured to have the opportunity of commanding SNMCMG2. I’m looking forward to working together with highly trained and skilled members of Mine Countermeasures (MCM) community from different Allied nations. During my term; we will operate in the Black Sea and the Mediterranean in order to enhance NATO’s solidarity and readiness in these regions.

Besides NATO and non-NATO port visits, we will participate in three exercises as we are fully aware that conducting such exercises on a regular basis upkeeps a collectively trained and interoperable capability for NATO needs. I believe in professionalism and devotion of my staff and crew of the flagship and MCM vessels. My staff and I are well prepared and we are ready for the tasks ahead.”

Living in bubbles with no shore leave….. that will go down well.

We’re all in restricted circumstances & have to make the best of it.

Yeah, doesn’t mean you have to like it though. And Jack likes to drip……

Slight aside, but just read that the USN are looking to sell off their entire fleet of safeboats mkv1

This could potentially offer the uk a very good inshore patrol boat option if we can get them at a decent price or even fisheries enforcement.

I am a big fan of these boats and if we can get the whole fleet of 12 it would be a good capability uplift even if only as an interim solution.

Perhaps $30m for the whole fleet would do it?

I think the last thing the RN needs are more small corvette / OPV’s.

These are also pretty manpower and budget intensive by RN standards.

Cant disagree with your assessment although I think at this cost for a relatively young platform it could be considered.

I think the other thing would be the sheer embarrassment of buying in a platform whereas RN has always bought new, to bespoke design.

I’m not sure that it would also fit with the Parker Report and recreating UK shipbuilding.

72 tons is nowhere near a “small corvette/OPV”.

Fair point: doesn’t alter the thrust of ‘what do we need them for when we need other things much more?’

You’ve forgotten the new Dreadnought submarines for our nuclear deterrent mate…… which will easily cost upwards of £1.5 – 2 billion EACH!!