Typhoons struck an Islamic State-held building in eastern Raqqa whilst Tornados hit two firing points in a building in Mosul.

According to a statement to the press issued by the Ministry of Defence, on Monday the 5th of June, two Typhoons supporting Syrian Democratic Forces close to Raqqa, used a Paveway IV to strike a Islamic State-held building in the east of the city itself.

Tornado aircraft meanwhile continued operations over Mosul, and employed a pair of Brimstone missiles to deliver pinpoint attacks on two firing positions located in a large multi-storey building, where the terrorists had stationed a recoilless anti-tank gun and a machine-gun. 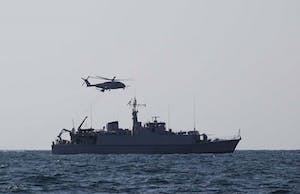