The Border Force and Royal Navy are expected jointly to patrol the channel amid fears more migrants will try and use the route to enter Britain.

It has been reported that the government plans to increase collaboration between the UK Border Force and the Royal Navy in order to strengthen defences against migrants crossing illegally by sea into the UK. This seems due to the fact that the Border Force only has three vessels operating at any one time in the seas off Britain,

Bernard Barron, president of the Calais coastguard, warned media last month that the Channel risks seeing the same scenes of tragedy as the Mediterranean as migrants are taking increasingly desperate risks to get on to British shores.

This follows news that some Albanians had to be rescued by RNLI Lifeboat crews off the coast of Dungeness when their boat started to sink. It is understood that two British citizens have been charged with immigration offences and are due to appear.

In February, five Iranian migrants rescued from the English Channel with hypothermia after trying to reach UK from France during 60mph gale.

At the time, it was only the second or third time in ten years that someone had tried to attempt such a crossing, said head of a local police union, Gilles Debove. The frequency is now starting to increase.

French police said crossing the Channel is very dangerous because of the large number of ships in the waterway, the BBC reported.

There is now a good case for keeping Tyne, Severn and Mersey once the batch 2 river class become operational .

That’s what I thought, hope they keep them for the Border Force!

Open fire blow them out the water

Sean, honestly, you’re on the wrong page. Have you considered the Daily Express?

I actually agree with Sean, gun them down. You can’t deny it wouldn’t solve the issue. Statistically if it stops them from coming it would save more lives. We’re talking about people that are illegally entering another nation and are henceforth abusing the rights of all citizens in said nation, we’re talking about people that place sticks on roads to slow down traffic and endanger the public. It’s time to go to extreme levels to reverse the damage that has been done by rescuing them.

Hmm, might as well have P & O banners on our warships, turning out to be glorified ferries.

Facebook reply of the week goes to UK Defence Journal !

Honestly, everyday we see in the news X number of migrants saved off the sea and brought to Europe… really? This is not saving, this is encouraging millions to risk their lives in the sea and it is aid to illegal migration paid by the tax payer… if this is what the RN is going to do in the Med.. .then it is just an irresponsible and illegal waste of money.

Hi David, do you know what ‘illegal’ means? I don’t think you meant to use it in that last sentence.

Hello UKDJ … I am a economic migrant in the UK. And illegal means that if a person like me, enters the UK without showing my passport… well…. probably something bad will happen? don’t you think? … I don’t understand why this people is allowed to get in a boat and just come, when millions of people every year have to show their ID and Visas in the airports? I don’t understand this, and millions of people, do not understand either… and it is utterly stupid and utterly unfair for the British people and for the other people who are… Read more »

I agree with Adrian Bennett – this is a task that does not need state of the art vessels; it just needs vessels. Considering the number of patrol activities we undertake, not just in home waters, but in the Med and the pirate hotspots of Africa, a bigger fleet of River Class ships must be sensible, especially as they would be much cheaper than deploying Type 23 or 45 vessels.

Then stop scraping our navy, we need every ship now !!!

Perhaps when the new River class opvs come in to service, the old ones could be handed over to the Coastguard.

This article (http://www.theguardian.com/uk-news/2016/jun/05/uk-plans-to-strengthen-defences-against-migrants-arriving-by-sea) talks about the border agency… “waiting for the arrival of a fleet of new 20-metre patrol vessels to strengthen operations in the seas off the UK against people smugglers, gun runners and drug gangs. The first of the vessels, which are designed to be more nimble than the cutters, is due to come into operation this summer, with the rest in use by the end of 2017.” I couldn’t find any reference to these anywhere else. Does anyone know if it’s true? If yes then how many are we getting and who is building them? For channel… Read more »

i
Reply to  Julian

I understand from a BF source that these are second had 18 metre craft, currently deployed in the North Sea, whether with a private or government organisation I do not know.

Good but then what? Is this going to be a case of picking them up and taking them back to France or will they bring them here.
The worst thing to do would be to bring them here as before you know it we will end up in the same situation as Greece as more will make the trip. A harsh stance needs to be made on this to stamp it out before it gets out of control.

Couldn’t agree more. But you can guarantee they will be helped on their journey here. And then they’ll all call home and tell their families and friends, resulting in even more making the journey. Just like the hand wringing fools who organised the Mediterranean operation did. Just encouraged the situation to get worse. If they’d just picked them up and taken them back to Libya the message would soon have been received and understood.

They may continue to risk their life in the hope of being picked up and taking the rest of the way, could end up being a bit counter productive if we start a similar op as in the med.

Says nothing on wether they were retuned to the coast they came from,

I don’t mind the Navy picking them up as long as they take them back toFrance!!

Country of origin would be better.

Country had it . Its an invasion simple as that and we are letting it happen .i would open fire sink them that would stop them coming

Thats why we are f….ked

Cant think much of his kids if he leaves them there in first place .all healthy males coming and if knobs in power cant see they are most likely IS to take uk .and where will all the rich be ! Sunning it up someplace while normal people have to deal with it

Needs someone with bollox and backbone to stop it

If they’re in RIBs then turning them back is pretty immoral due to the danger of them drowning but a border force vessel taking them back to point of origin would seem reasonable. Is that legal? Presumably we have to wait for them to be in UK waters before having the right to detain them at which point is it just like detaining someone airside at Heathrow/Gatwick/etc where people refused entry are (I think) shipped back to where they came from? How do international/territorial waters work in the channel? Is there a corridor of international water running down the middle… Read more »

They should sink them

Nimrod would have been a massive over-reaction in this scenario. As would the P-8’s we’re getting.

Joking aside. Do small craft appear on radar?

They did with Nimrod! Since when has airborne command and control at a scene of national integrity been an over reaction?

King airs will do or coast guard

2 rowing boats and an extra pair of binoculars at Dover?.

You cannot blame these people for trying.. Many of these people come from desperate situations, sometimes corrupt war torn nations, no futures for themselves or there families. So i don’t blame them for having a go.. But of course there does have to be some control to the amount of people that come into our country. When it comes to the amount of patrol vessels we have, i think keeping the old River class vessels would be perfect, would give us a fleet of nine River class vessels i think? (one being in the Falklands).

update: from above, nine once we have the new River class vessels i mean.

What? picking people from the water and bring them here? more aid to illegal migration? paid by our taxes ? and encouraging more millions to risk their lives and do the trip! Totally irresponsible!

Why bother with border guards. Give it all over to the RN, those patrol boats they use for training would be a good and cheap vessels for the job. And we have a fair few of them.

the big question is where will they take them when they pick them up. i suspect the UK, so that is going to encourage more to do the trip , knowing very well they will get picked up

This is the catch 22 problem. We have to pick them up, or there is a high risk of them dying, which no one sane wants, but by doing so we are increasing the numbers that will try and so increasing the risks of death. Of course they will be taken on the UK, there is no real question about that, after all where else are they going to be taken, which country wants to take poor migrants that they don’t need to, since they are likely to drain their economy at least in the short term until they can… Read more »

To provide a free ferry service?

what should have been done is how Tawain Vietnam solve things they fix the boat give them some water and send them right back….the same should have been done when all this migrant crisis kicked off…the ships should have picked them up and took them straight back…because what sickened me about the migrant refugee crisis especially watching all the media coverage is the amount of young men of fighting age their were more of them than women children and the elderly….i am not against helping people and if it had been women children and the elderly then tempory refuge should… Read more » 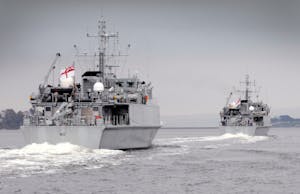 August 5, 2021
The two minehunters were decommissioned in Rosyth this week.