Now that there is a Russian flag planted atop the regional Parliament in Crimea, an even more garve threat to the integrity of Ukraine has reportedly emerged. Ukraine has now accused Russia of staging an “armed invasion” of Crimea today as Ukraines ousted leader prepared to emerge from a period of hiding after gaining protection from Moscow.

Unidentified armed men were patrolling outside of Crimea’s main airport early Friday morning while gunmen were also reported to have seized another airfield on the southwest of the peninsula where ethnic Russians are a majority and where pro-Moscow sentiment runs high.

In what could only be described as terrible timing or a bult political message, Russia flexed its military muscle by ordering war games involving 150,000 troops along the Ukrainian border. It should not be forgotten that Russia is primarily a land power.

Unconfirmed reports by Ukrainian media said armed men had also seized the Belbek airfield near the city of Sevastopol, which is home to Russia’s Black Sea naval fleet. Ukraine has also accused the Russian armed forces of being behind both incidents.

The Ukrainian interior minister said gunmen at the Simferopol airport “are not even hiding the fact that they belong to the armed forces of the Russian Federation”. He added that the Belbek airfield was “blockaded by military units of the Russian navy. I consider what is happening to be an armed invasion and an occupation,” the minister said in a statement posted on his Facebook account.

However, contrary to the above, Russia’s Interfax news agency quoted an unnamed source as saying that the Belbek air field was under the control of local pro-Russian self-defence units who had no links to the Black Sea fleet.

Ukraine’s interim president Oleksandr Turchynov responded by defiantly declaring that any movement of Russian troops out of their Black Sea bases in Crimea “will be considered as military aggression”. 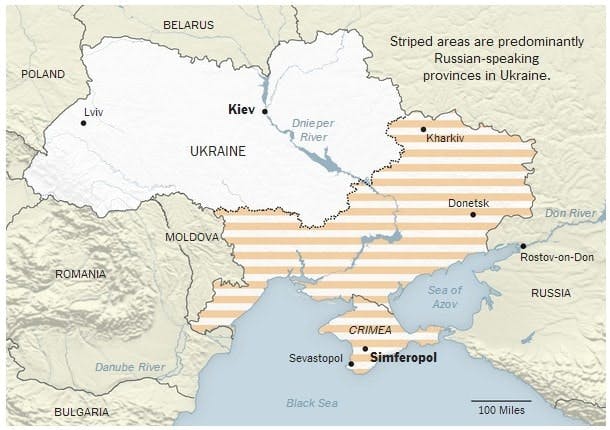 US Secretary of State John Kerry sought to relieve pressure that has increasingly resembled that of a Cold War historical footnote by announcing that Russian Foreign Minister Sergei Lavrov had assured him that Moscow “will respect the territorial integrity of Ukraine”.

It is not immediately clear what direct role, if any, Russia has played in the crisis in Ukraine but the situation here matches the situation that previously played out in areas like Abkhazia and South Ossetia, where pro-Russia populations broke away from Georgia to in effect become Russian protectorates.
UPDATE: Russian Forces move towards Sevastopol