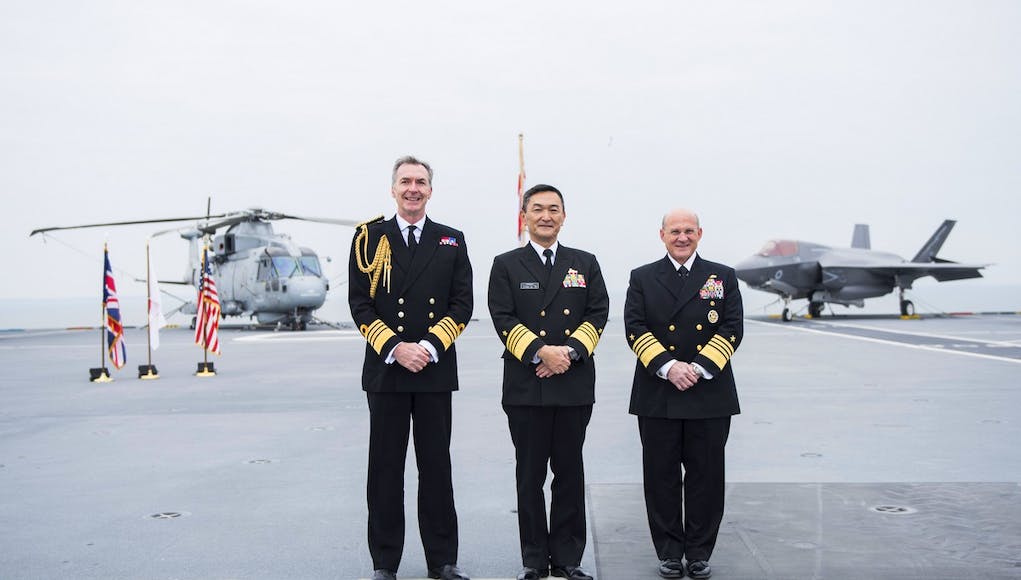 During the meeting, the three leaders signed a trilateral cooperation agreement reaffirming their commitment to increased collaboration and cooperation.

“Today, we reaffirm our commitment to strengthen our common efforts, which demonstrates that our relationships are institutional, rather than merely personal,” said Gilday.

“This agreement strengthens our naval bonds and codifies our continued dedication to a free and open maritime commons. There is much to celebrate in our trilateral relationship; indeed the whole is greater than the sum of its parts.”

Gilday said that operating together with Allies like the United Kingdom and Japan, who have global reputations for conducting the most complex and demanding naval operations, is critical to security.

“We should adapt ourselves to a newly emerging security trend,” said Yamamura.

“With this trilateral heads of navy meeting as a catapult, I am confident we’ll work together to find our way ahead.”

The U.S., Japan, and United Kingdom maritime forces regularly operate together, most recently in two trilateral anti-submarine exercises in the Indo-Pacific region this past year.

“In an increasingly interconnected world, partnerships and alliances such as this are vital for protecting the freedoms of the international community,” said Radakin.

“I look forward to continuing to learn from one another, sharing our experiences and exploring where we can pursue our common aims together.”

“I am upper class. I get a weekly salary.”

“I am middle class, I get pay packets in specific increments.”

“I am working class, I don’t get increments Quite the reverse.”

For once, the Brit gets to be John Cleese!

The headline photo rather reminded me of this:
https://youtu.be/9tXBC-71aZs

Is history repeating itself? The last time a close working relationship was established a considerable amount of carrier technology was gleaned by the Japanese, which lead to initial dominance in the Pacific. I’m sure today’s relationship will be more equal and complementary, which will enable a considerable show of force in the SCS when required.

I have wondered at the parrallels with the late 19th and early 20th centuries. I think that the key difference here is that the UK / US are close allies rather this time around. The relationship between was if not exactly rivals certainly not as friendly as it is now. Nevertheless there appears to be a growing scramble for position in the Western Pacific / South China Sea area and alliances like the one on display here are proliferating. Not a good sign me thinks. We see similar at the sharp end as well. China is pushing her luck in… Read more »

Has Japan’s Navy been in any combat since Ww2? By the looks of their navy mans Ribbons he’s been busy.

No, peacekeeping and escort missions in various regions. The untold story is their regular interception of PLAN ships violating Japanese waters. The JMSDF spends a LOT of time at sea to maintain territorial integrity against constant encroachment by the Chinese.

Gets tense out there but rarely reported. One incident comes to mind a couple years ago where the JMSDF tracked and hounded a PLAN SSN in the Senkaku’s until it was forced to surface and leave. Major humiliation for the Chinese but little known.

They’ve just followed the US tradition of awarding ribbons for being able to tie your own shoe laces. It is fascinating seeing the uniforms together however, US uniform a simplified version of the British uniform and then Japanese uniform a straight copy of the US but adding a name tag.

Sorry to post this link twice but didn’t see this article till now. better on topic location.

I see it being integrated into ‘Gator ops’ and I know there is discussion going on over the pond about ‘F35 carriers’, but that is just reheated idea from the 70’s.

Have we given up on buying A?

Will our carriers go to sea with 36-ish FJ?

And perhaps if Crowsnest had had some more investment (better radar, new dedicated cabs)…….

But as thing stand our carriers aren’t a substitute for a CVN. A good support for the USN and USMC, but not enough on its own.

IMO the QEs are not a one for one substitute for the USN’s carrier force. The QEs have the limitations of being non CATOBAR capable vessels which puts sharp restrictions on the force projection capabilities they possess. They wouldn’t do well in a fleet on fleet strike carrier role in the Pacific, which just by the sheer vastness of that ocean, demands CATOBAR equipped carriers for deep, blue water operations where survivability is dependent on “getting lost” in all of that empty space and having the range in their air wing to overcome that distance Also, although they are well… Read more »

We’re more likely to be going to play with the USMC CSG’s in my opinion. Our flat tops have been specifically designed for the F-35B and not the other way round. In my opinion this means that their future role had already been agreed on before the first designs had been drawn up. If you look at the QE Class properly and compare them to the later Nimitz Class and the more modern Ford Class, they’re two totally different beasts….in fact, you can’t really compare them at all. Both have different roles to play in a mixed NATO CSG, they… Read more »

The photo reminds of that sketch from the Frost Report.

I smell a huge trilateral South China Sea Carrier strike group deployment in the not too distant future…..