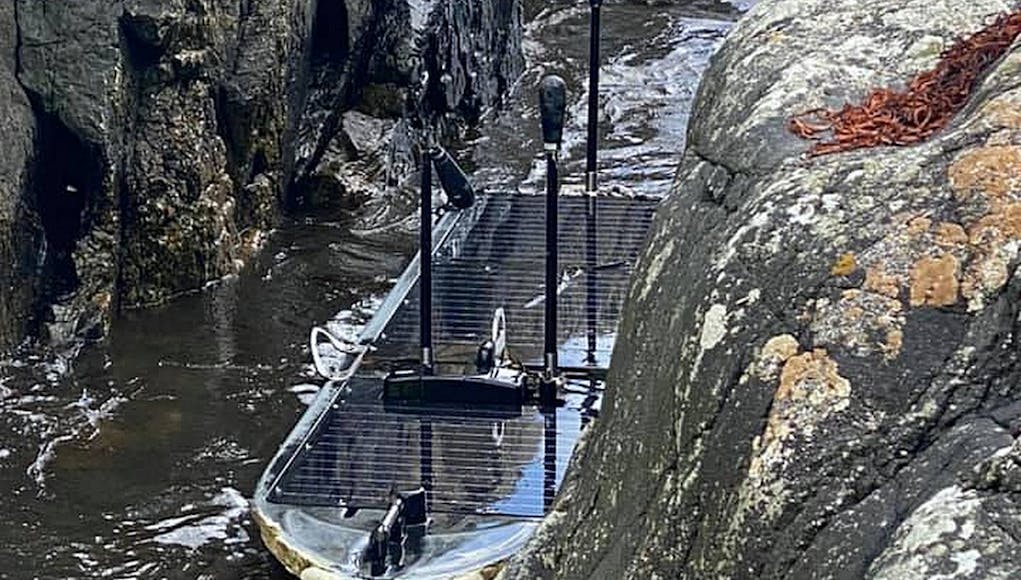 A small unmanned vessel, apparently configured not to be detected, has appeared on the Scottish Island of Tiree.

The craft is a ‘Wave Glider’, produced by ‘Liquid Robotics’ which are part of Boeing. The only information I’ve been able to find on what the vessel might be doing in the area relates to the ‘Unmanned Warrior‘ exercise when Liquid Robotics and Boeing used a network of persistent USVs to detect, report and track a live submarine.

The firm have a list of customers but none are publicly still using it in the North Atlantic.

According to the firm, the vessel has the following capabilities: “Wave Gliders are a low-cost, mobile platform for 24×7 persistent acoustic surveillance, so you can detect vessels entering or operating in a targeted area. During a mission to patrol the waters around the Pitcairn Islands, the Wave Glider successfully intercepted and collected data on three vessels whose AIS signatures were unavailable.” Who does it belong to?

The Ministry of Defence have denied that the vessel belongs to them, the only other operator in the public domain is the U.S. Navy.

Cefas, another potential owner, have also reportedly denied it’s theirs.

What is unusual about this vessel?

David Hambling, a Defence and Aerospace reporter at Forbes, said:

“There are a couple of unusual features about this particular Wave Glider which suggest a military rather than scientific mission. One is that is grey rather than the usual bright yellow, with no pennant to make it easier to see. There are no navigation lights, which are compulsory for any vessel sailing at night under UK law, or a radar reflector.

Without these aids, the glider, which lies flat on the water, would be extremely difficult to spot. This would make it a navigation hazard, though in almost any collision the small unmanned craft would probably come off worse. This may explain why one of the antennas is broken and how it ended washed up on a beach. The question though is why such a vessel would be sailing covertly in ‘stealth mode’.” 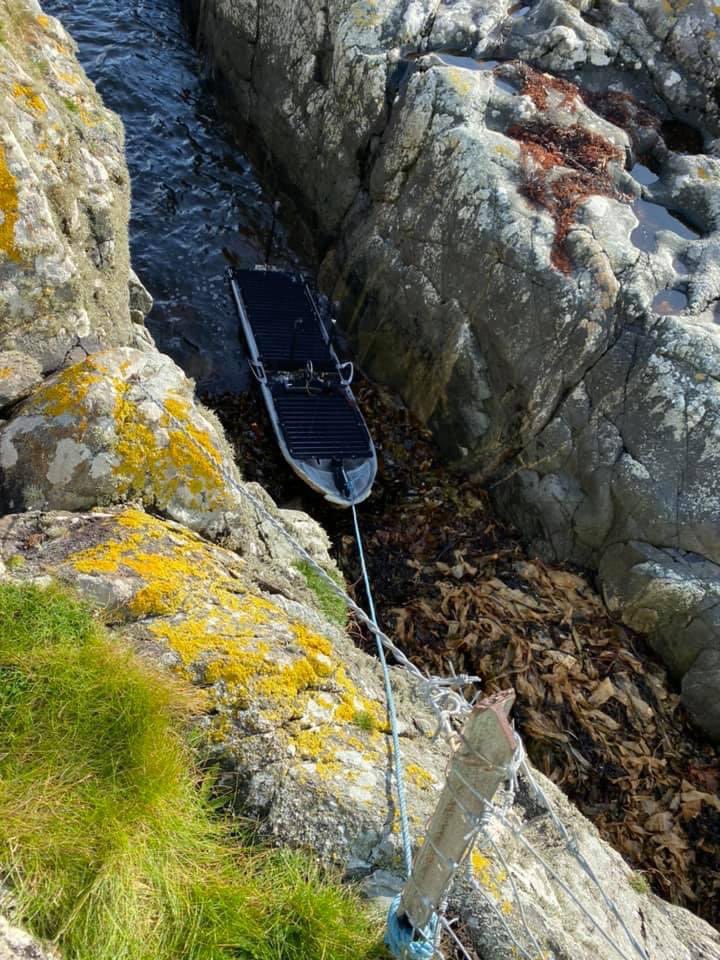 HM Coastguard said when the vessel was found:

“The team were called today to reports of an object in the water, once on scene we secured the item. We are currently trying to find out some more information as to the objects origin and owner. If anyone has any information please get in touch. Remember if you see something out of place on the coast please dial 999 and ask for the Coastguard.”

This unmanned surface vessel isn’t British but it is, apparently, being operated in British waters.

Well at least the Chicoms didn’t find it. haha

Very surprising, given their naval patrols and access to the British coastline!

Not necessarily operated in British waters. The North Atlantic current flows past Scotland and Tiree and therefore it could have floated across from the US.

The MOD saying it isn’t theirs is perhaps disingenuous as they typically rent items like this from the manufacturer for the duration of trials.

Jack
Reply to  Bloke down the pub

Or maybe the Americans were being sneaky and things went wrong. If so, i wonder what conversations are being had behind closed doors.

ChariotRider
Reply to  Bloke down the pub

True, but they often include considerable support including trained operators from the contractor, especially if is was the payload that was the focus of the trials. The masts on the vessel could well be part of the control / navigation system rather than mission payload. So it is entirely possible that the vessel was ‘handed’ back to the contractor before it was lost! Whatever, the reason for the ‘mystery’ someone somewhere is going to be very embarressed when they check their inventory. Of course, it could have been lost over the side of a transport vessel given the weather we… Read more »

I wonder how much the local land own will get for it on eBay.

If no one is going to claim owning it, then i would guess yes and it will on eBay before long.

That’s pretty cool. May make for good picket ships in time of war. Save any more ships from facing the fate of HMS Sheffield.

“Please mister, can we have our ball back”.

I bet there is a few embarrassed people in the US navy which is my guess to the owner. Some very interesting tech

We always assume its UK or the US. Could belong to Norway or another North Sea nation.

Given the number of U.S. submarines in the area, a good gues would be the worries over Russian interference with the undersea cables. Its very interesting that two unknown signatures were found during the last exercises in the cable area, Russia doctrine is to have two submarines circling single or more submerged vehicles doing work ?. On the seabed. The weather may have let one get hit, disabling it and getting lost. On ebay very rich person will turn up and pay any price to either keep it, or take it away. If you can keep hold of it for… Read more »

Ask in Bruaichladdich about the ‘Yellow Submarine”. Hauled up in nets, the Navy initially denied it was theirs then came to pick it up. There’s a bit more to it than that but they named a whisky after it.?

Got to be connected to the NATO training exercise of Scotland at moment it’s too much of a coincidence that something like that is prowling about and there’s an exercise in progress.

Looks like solar panelling across the deck. i would love to know what it was towing, (if thats what it was doing). could be a towed array or a feed to a deployed sonobuoy. either way it makes for an intriguing story. Aerials could be for remote control and data uplink.
Any reason it could be russian??

I did read speculation last week that it could have been acquired and operated by Russia. No idea if there was any evidence behind that claim, a form of misinformation or pure speculation on the part of whoever made it.

it’s either been used as part of the exercise in some quite way,or it’s been monitoring the exercise to see how things are used,but it is certainly no coincidence of it being there at the same time as a major exercise especially when 5th gen jets are in use..