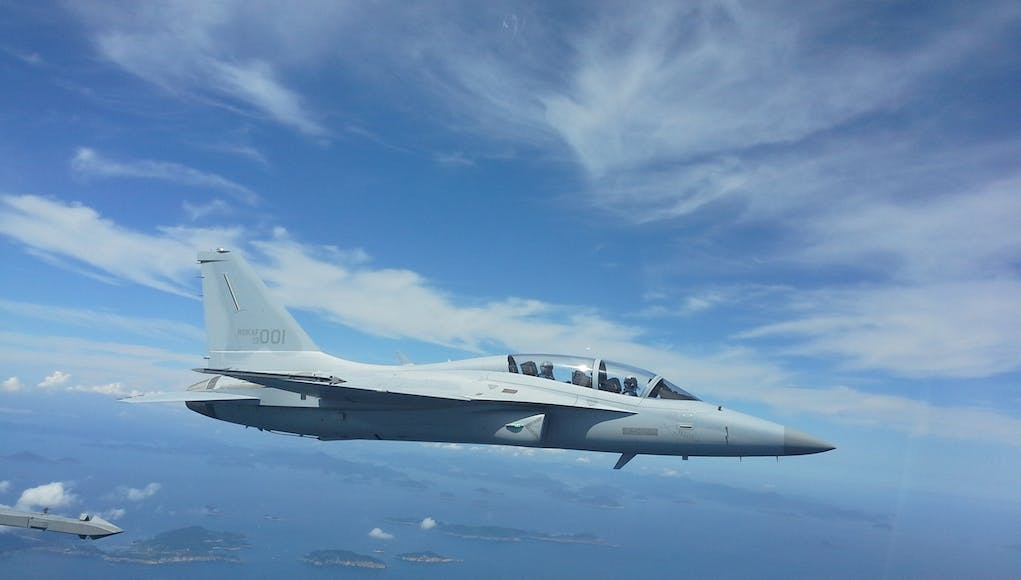 The US government has blocked South Korea from exporting $400 million worth of indigenous supersonic training jets to Uzbekistan.

South Korea had been in negotiations with the Uzbek government to export T-50 Golden Eagle trainers but the US government is opposing the deal, citing possible technology leakage and diplomatic policy.

The T-50 Golden Eagle was co-developed in 2006 with Lockheed Martin, using the firm’s core technologies, including the avionics system and engine.

Because of this South Korea needs to get approval from the US government to export the aircraft in accordance with the US Arms Export Control Act.

The T-50 has been further developed into aerobatic and combat variants, namely T-50B, TA-50, and FA-50. The F-50 is another advanced fighter variant being considered. The T-50B serves with the South Korean air force’s aerobatics team. The TA-50 light attack variant has been ordered by Indonesia. The Philippines ordered 12 units of the FA-50 variant and Thailand ordered 4 units of the T-50 advanced trainer variant. The design is largely derived from the F-16 Fighting Falcon and they have many similarities: use of a single engine, speed, size, cost, and the range of weapons.

The refusal comes at a sensitive time when as South Korea’s weapons procurement agency has been denied key avionics technologies with its purchase of 40 F-35 jets.

The article says why, it contains American equipment they don’t want to sell.

Oh. Wait I got it all wrong. They want to sell it to ISIS instead :v

Dhubra, we both know that facetious comments only show a lack of manners, your aggressive tone isn’t welcome here.

We prefer constructive and civilised discussion.

Cant even spell a name properly and talking of civilisation. :v

What correlation is there between typing a name incorrectly and discussing matters in an adult fashion?

I made a mistake, I freely admit that. Please do not embarrass yourself further with childish comments.

The world has come across you and your dad’s adulty fashion in Vietnam , Afganistan , Iraq and Syria. Now Russia is handling it in a childish manner for you. :v

Come on Dhruba, don’t start commenting on ethics when you come from a country that can’t help the poor but can happily fund a space programme

Russia is conducting less than 20% of its 30 sorties per week against Islamic State, that’s lower than even Jordan.

I would advise you to stop commenting if you’re simply going to be rude.

Yes we can. Want to invade us and offer us some freedom ? 😀

I am amazed people think Russia is as involved as that given their own media report their sortie numbers and locations after they’ve happened.

Russia are playing a much less active role in the region than the US, UK or even Canada prior to the recent Canadian election.

You have us confused with the Americans……

Dhruba, with respect, I have asked you to be civil twice now. Did no one teach you manners?

Oh yes. I might have confused you. You are not american people you are american puppets 😀

You should ask that your imperial family who looted us for 200 years :v

Yep. You see us rolling. You hating.

It’s a pity when people are brought up so poorly they find it funny to insult strangers based on nothing but what country they come from.

We learnt this from you only man 😀 Didt your forefathers write than in your history books ? 😉

I’m forwarding this conversation on to his family through Facebook now.

Karma is a bitch man. You thoughy you rule the world by 21st century and see you live under american shadow now. What a pity man. :'(

Dhruba, why are you being so rude? I’m not going to enter a debate with you about history.

Our job is to report defence news, I’m not even British.

And i wonder what shadow your country lives under then? But hey dont fret over an answer we all know ?

Yes thats it. I also expressed my opinion. You are only lengthened the conversation.

Dhruba Banerjee seems to have a rather large chip on his shoulders. As it says the terms of the contract, The US has to agree to any export of the technology. They don’t want it going to Uzbekistan, why is that hard to understand.

We are building 2 more one being nuclear powered. God has gifted us with the power to fight with our stomachs empty. 😉

Us? You are not in the military.

Okay, now you will say that you are funding the project What most English people dream to think.

What are you talking about? I am not English nor do I think the United Kingdom is funding India.

Why do you insist on causing trouble? We’re a defence news page, I have no interest in national politics.

No, as said before, we report news. Please stop posting here, all you have done is cause trouble.

Do not bother to reply then. I have rights to express my opinion as long as I am not violating facebook guidelines.

Wont be long before ge comes to the uk to scrounge of our government wouldnt waste my breath of commenting back to his utter BS.

LOL. See you still think India runs on UK aid. Lost the empire but still thinks himself the king. Thats the defect of “royal blood” 😀

Pmsfl what ive just read will wipe the smile of your smug face lol your country wouldnt run if it wasnt for what i have just read so please spare your embarrasment and go find a wife sorry force marry a wife good kid.

Come on dude.. everyone has a right to dream. Afterall, in the capitalist world, hardly anything but dreaming is free.

What the actual fuck are you on about noone actually said britain runs your country you stupid boy and as for the prison comment im just gonna ??????.

Gentlemen, take this somewhere else. We are a defence news page not a nationalist forum.

As for me bothering to reply, this is my page and I take the standard of comments seriously, stop causing trouble.

Brian, if you could not provoke him that would be great.

You should thank me for contributing to your viewrship. Otherwise you posts hardly get any comments. Saw a post where you mentioned “Tejas have joined the IAF” whereas it is yet to get FOC reflects the quality of your reporting. A fair reporter doesnt take sides he just reports 😉 Good Day

Dhruba Banerjee Our primary resource is the website, which is where we make our money, not facebook.

The first Tejas LCA was officially inducted into the IAF on 17 January 2015, with final operational clearance expected by late 2015. That’s what your air force say.

Also, what side have we taken? I have asked you to stop posting insulting comments, not sent our monthly profits to Pakistan.

are you 2 finished with your petty argument, the U.S. has a valid point & S. Korea agreed to do whatever was asked of them. However the US can get very petty when it suits them, just saying–don’t get mad at me.

China steps up patrols over South China Sea as it attempts...

What is happening in Ukraine?