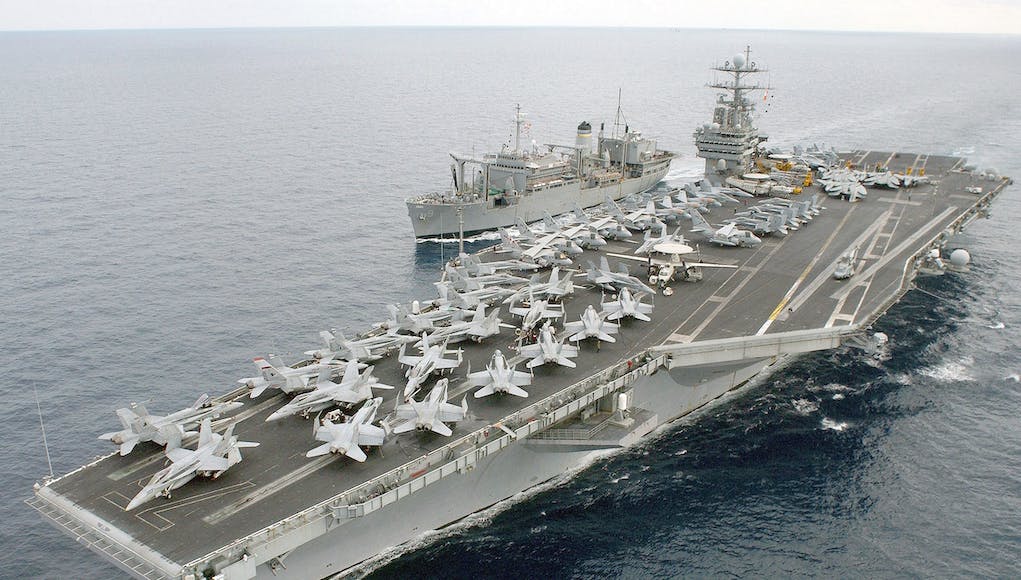 The USS Harry S. Truman’s arrival will end a gap where the US did not have an aircraft carrier in the Gulf. The supercarrier is due to arrive in the Persian Gulf around Christmas where it will begin striking Islamic State.

The USS Harry S. Truman and its carrier strike group will join the French aircraft carrier Charles De Gaulle in the Gulf, which arrived earlier this month.

Other vessels in the Strike Group provide additional capabilities, such as long range Tomahawk missiles or the Aegis Combat System, and also protect the carrier from attack. A typical Strike Group may include up to six surface combatants, including frigates, guided missile cruisers and guided missile destroyers and one or two attack submarines.

The vessel itself is a Nimitz class aircraft carrier, these vessels can accommodate a maximum of 130 F/A-18 Hornets or 85–90 aircraft of different types but current numbers are typically 64 aircraft.

A typical carrier air wing can include 12–14 F/A-18E or F Super Hornets as strike fighters; two squadrons of 10–12 F/A-18C Hornets, with one of these often provided by the U.S. Marine Corps, 6 E EA-18G Growlers for electronic warfare; 4 E-2C/D Hawkeyes for airborne early warning (AEW), C-2 Greyhounds used for logistics and a Helicopter Antisubmarine Squadron of HH-60H Seahawks.

Now that’s what I call a Carrier Air Group! I wonder whether our two new carriers could ever muster a CAG of that size and diversity – even between them; I doubt it.

The picture is at least 6 years old. because all the air stores support ships pruchased by the USN from the Royal Fleet Auxillary have either been sunk as targets or scrapped.

That looks like the old Lyness in the background.

Where have they been????

Finally!!!! What have they been doing this whole time?

Will Farrell
Reply to  Robbie Robinson

Hitting them from Turkey.

I spy an old Ness boat – Which one

If it is indeed the USNS Spica (T-AFS 9), then that explains the similarity to the Lyness Class. All three of the Sirius Class were purchased from the UK, previously being the RFA Lyness, Tarbarness and Stromness. Superseded by the Lewis and Clark (T-AKE)class.