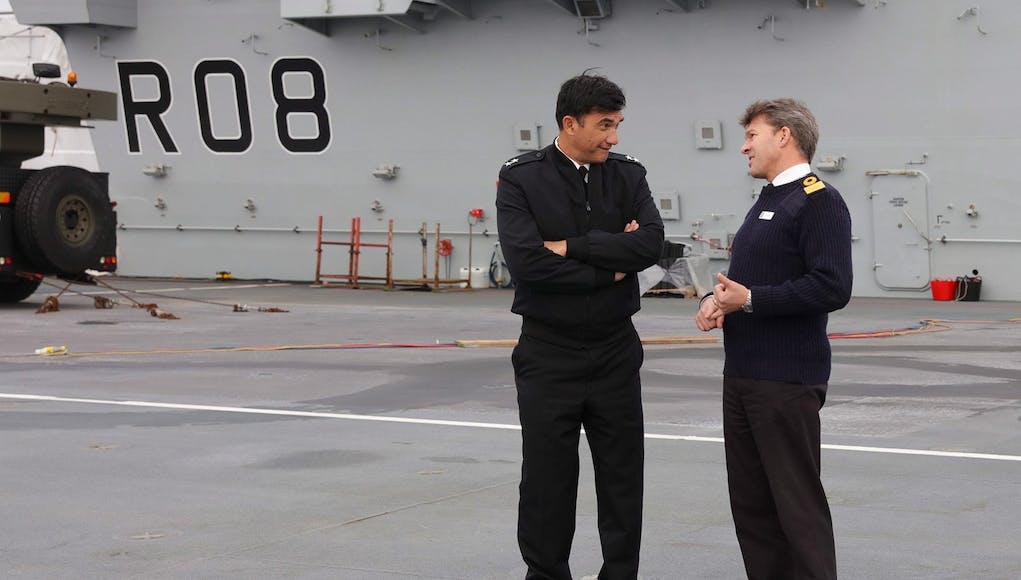 Admiral Patrick Piercey was hosted on board HMS Queen Elizabeth by the Commander of the Royal Navy’s Carrier Strike Group Commodore Andrew Betton.

Cdre Betton briefed Adm Piercey on the Carrier regeneration programme and how the two Navies are working together.

“It’s a great Opportunity to discuss the UK’s return to Carrier Strike Operations and how we can build our close operational partnerships across the Globe,” said Betton.

The Admiral also visited HMS Collingwood to take a look at the CSG synthetic validation exercise being held on the Base.

“The Admiral had a very keen understanding of the challenges we both face and was impressed with UK CSG’s progress thus far. I think we the UKCSG will be a welcome addition to any allied force as we bring significant combat power.”

“The Admiral was visiting the Home Base of the Royal Navy’s Carriers as part of a wider UK visit organised around defence engagements at Joint Headquarters in London.”

hopefully he can talk some sense into westminster bureaucrats

Hopefully, but don’t hold your breath on it.

So you really think an American admiral is about to march into a foreign government department and start laying down the law over domestic policy. Meanwhile back on planet earth.

Been done before. However it takes people willing to listen and not have a childish belief in American altruism (known in the US as being a sucker). For reasons that escape logic people seem to think that the US is joking when it says it will leave before having to defend all of Europe.

Elliott – well do please leave Europe then. I am sure the new EU Model Army and the German high readiness fleet will take care of business out to the Baltics and Ukraine. We won’t be for much longer the way the EU are treating the British people I am also sure the Admiral will know the nuances of what he can and can’t say about a nation’s domestic policies. Obama tried to lecture us about our EU Policy and look how that worked out. We Brits like to co-operate and work with and assist our allies. But we don’t… Read more »

Wouldn’t mind doing so had my fill of the place since the 60s. Also I was merely pointing out that Admirals, Generals, and Chairman’s of the Joint Chiefs along with Secretaries of Defense and even Presidents of both parties going back to Nixon, have asked, demanded, and even begged at times for every for every NATO country to increase defense spending. The Admiral likely will be more nuanced after all he kissed enough a** to get stars. Yes the British do hate be lectured, mostly because it interrupts the one they are trying to give. I would also say President… Read more »

i hope was told where are our fekkin planes?