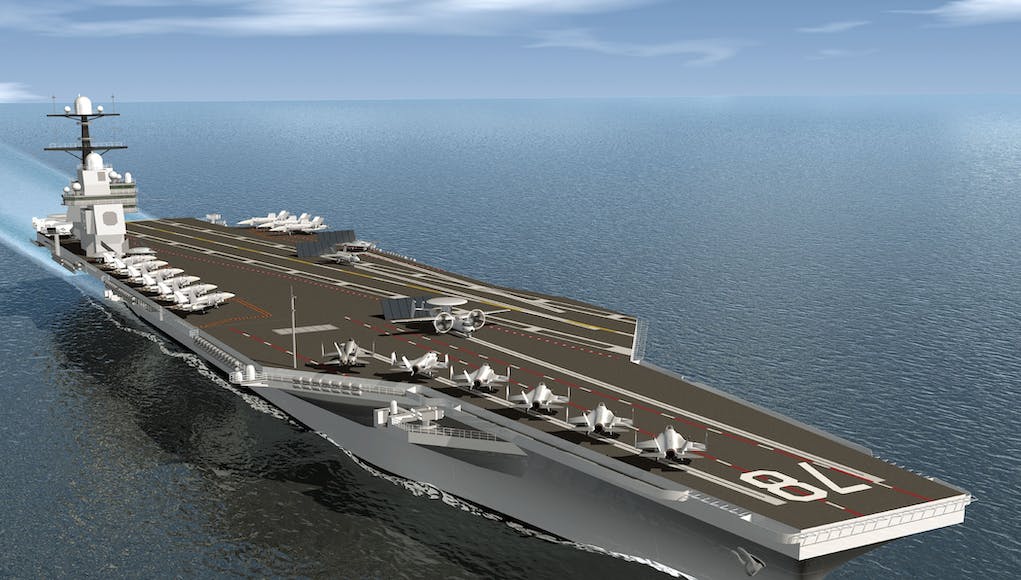 The US Navy has awarded a contract for the construction of CVN 80 and CVN 81 to Huntington Ingalls Industries-Newport News Shipbuilding (HII-NNS).

This contract award is hoped to deliver significant savings to the US government – exceeding $4 billion when compared to the Navy’s original cost estimates to procure these CVNs separately.

“Focusing on optimising construction activities and material procurement, the team was able to achieve significant savings as compared to individual procurement contracts. One contract for construction of the two ships will enable the shipbuilder flexibility to best employ its skilled workforce to design once and build twice for unprecedented labor reductions while providing stability and opportunities for further efficiencies within the nuclear industrial base.”

The US Navy said in a statement:

“These modifications increase the lethality of the FORD Class, and represent an additional $100 million in savings that is in addition to the $4 billion, since these new capabilities were not included in the original single-CVN Navy estimate. Plus, these new savings associated with new capabilities increases to $200 million if installed in the ship before delivery, in comparison to installing after ship delivery.

This Fixed Price Incentive (Firm Target) (FPIF) contract limits the Navy’s liability and incentivizes the shipyard’s best performance. The contract guarantees a single technical baseline for both ships, which allows the shipyard to re-use engineering rollover products, minimize changes between the two ships and leverage economic order quantities for equipment and material procurement.”

The size and power of the U.S is jawdropping. They can replace their carriers like-for-like. They could build many more QECs than we could if they used our design. It has been suggested (in the magazine Naval Proceedings) that their new assault ships could function as light carriers in their own right, putting their carrier fleet at almost 20. It is a testimony to the skill and determination of our personnel that the U.S even notices us. I do hope that the next wave of rising powers in the east and in South America only reach our level or a… Read more »

All is not perfect. There are significant problems for the USN in building replacement SSBNs and replacements for SSNs due to capacity problems.

Better than Half Empty !

How do you figure? The only decline in Carrier numbers occurred in the 90s with the early retirement of the late flight Forrestal’s and the Kitty Hawk class as part of the post Cold War draw down.
The goal has been 11 nuclear Carriers since 92. With the carrier 11 always replaced by the next class (due to Enterprise making the numbers odd).

How are the EMALS getting on though? if they mess up on mission then the carrier is screwed. One reason I like the F35b.

Understimated at people’s peril. A politician who follows through on his manifesto.

He will get in again. Easily I think.

Not a chance – unless he gets Russian help again, of course.

This is a man who is extremely capable at fooling people into thinking he is following through with his promises. If people actually believe that he almost single handedly prevented war with North Korea which he craftily associates to the pre elected claim he would bring peace to that peninsula then they will believe almost anything. He is purely the grand manipulator of truth with an audience already filled with the myths of the past 250 years of the Republic so ready to lap it all up. Many of the disasters of his Presidency will only be seen 10 years… Read more »

What we name our carriers is our prerogative no one else’s. On his re-election? Presidents getting re-elected is always the likeliest outcome. The only ones who haven’t screwed spectacularly or were incredibly unlucky. Examples: Hoover Carter – Great Depression, Truman – fired a popular and brilliant field commander in the middle of a war, Johnson – micromanaged Vietnam but more importantly did not crack down hard enough on the riots, Ford – never elected in the first place, Carter – Iran and Afghanistan, Bush Sr. – raised taxes and alienated his base further by supporting gun control. Trump hasn’t alienated… Read more »

The Chinese are stating that their new carriers will also feature an EMALS catapult system. They fully intend to challenge the US in the Pacific.

All that power from 4 carriers would count for nought against a pair of Astutes.

Only if they had permission. What realistically, would make UK gov give such permission to an Astute Captain?

Realistically, only if we were at war against China. I’m fully aware that that’s the only scenario where it could happen.

My point was more that we could do it. Although our numbers are low, one or two Astutes could wreak havoc among such a powerful fleet.

Any submarine can have its day. There was an excellent report of a Swedish diesel electric sub in the sub 1500 ton class having slipped through the carrier battle group screen and then completed a mock firing of 5 torpedoes into the side of a Nimitz class carrier in a NATO exercise. The USN was severely embarrassed as the attack would have resulted in a total loss of a 14 billion asset. Then there was Astutes maiden deployment to the east coast of the USA where she single handedly took on 2 Burke’s, 2 Virginia class and an aegis cruiser… Read more »