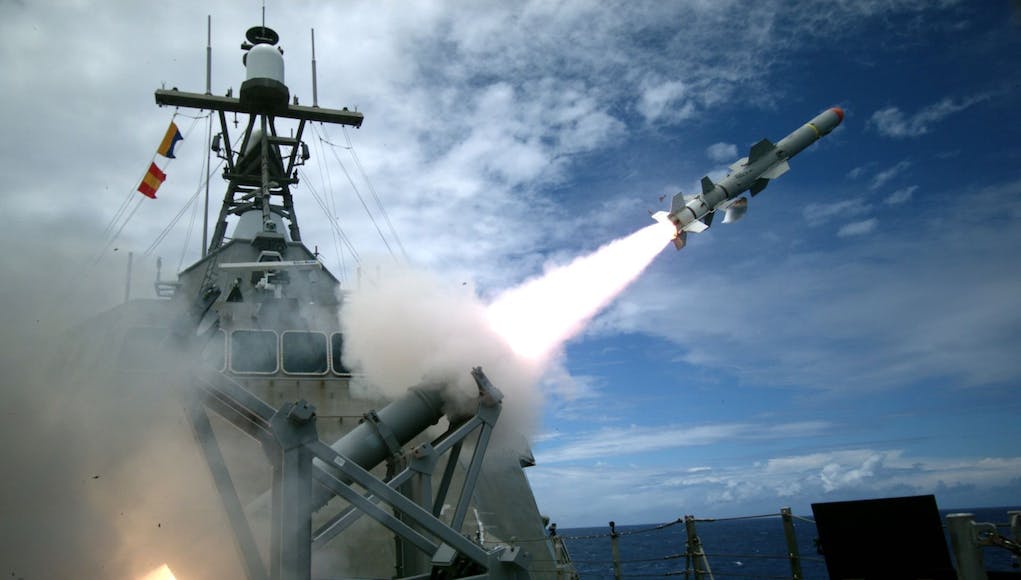 The test event validated the operation of the Harpoon missile aboard a littoral combat ship and provided the necessary engineering data to support future ship upgrades.

“This Harpoon demonstration on USS Coronado supports the Navy’s larger distributed lethality concept to strengthen naval power at and from the sea to ensure the Navy maintains its maritime superiority.”

The Harpoon installation aboard Coronado involved the collaboration of fleet and industry partners, such as ship designers, system design and sustainment experts, and installers to rapidly adapt and install the missile on Coronado.

“The incorporation of an ‘off-the-shelf’ Harpoon missile on USS Coronado in less than four months was no small feat and supports the Chief of Naval Operations’ focus on accelerated learning to bring capabilities to the fleet faster.”

Harpoon is an all-weather, over-the-horizon weapon designed to execute anti-ship missions against a range of surface targets. It can be launched from surface ships, submarines and aircraft and is currently used on 50 U.S. Navy ships: 22 cruisers, 21 Flight I destroyers and seven Flight II destroyers.

The test is part of a greater strategy by the Navy to increase the lethality and survivability of littoral combat ships, which includes demonstrating and deploying over-the-horizon capability on Coronado and USS Freedom (LCS 1) in the near term. In September 2015, Director of Surface Warfare Rear Adm. Peter Fanta directed the installation of a technologically mature, over-the-horizon capability across in-service littoral combat ships to support the Navy’s distributed lethality concept. Priority was given to Coronado and Freedom as ships preparing to deploy in fiscal year 2016.

In the case of Coronado, an in-service variant of the Harpoon Weapon System (HSLCLS 9/10 and Block 1C missile) was selected as a proven off-the-shelf combat capability.

While this demo represents the first over-the-horizon Harpoon test from an Independence-variant LCS in an operational setting, no decision has been made on which over-the-horizon missile will be integrated into the LCS platform. That will be determined by a future competitive contract award.

RIMPAC is a biennial multinational exercise that provides a unique training opportunity that fosters sustained cooperative relationships critical to ensuring the safety of sea lanes and security on the world’s oceans.

Is our navy strong enough to retake the falklands again if we needed to?

Matty Southworth a sustained battle with what exactly? If Argentina could take the Islands until the 1st New Carrier and her Jets are ready the UK would struggle, but given the Argentine Navy lacks many serviceable ships (lost a destroyer in port recently), their airforce any fast jets, it would seem unlikely that they’d be lost in the 1st place…

There isn’t really an Argentine military any longer. The navy don’t have the ships, the air force no longer have any fast jets and most of the Army’s kit is from the 1960s and 70s.

Im just asking the question, i dont know much about the argentine military, look at the comment i put earlier, im just asking hyperthetically, could our navy now deal with a modernised argentine navy, air force and army the same size as it was in 82?

Argentina couldn’t carry out a pitch invasion at the moment let alone invade the Falklands!

Are you building us up to a major conflict?

Holy moly! You mean the LCS can actually do something now?!