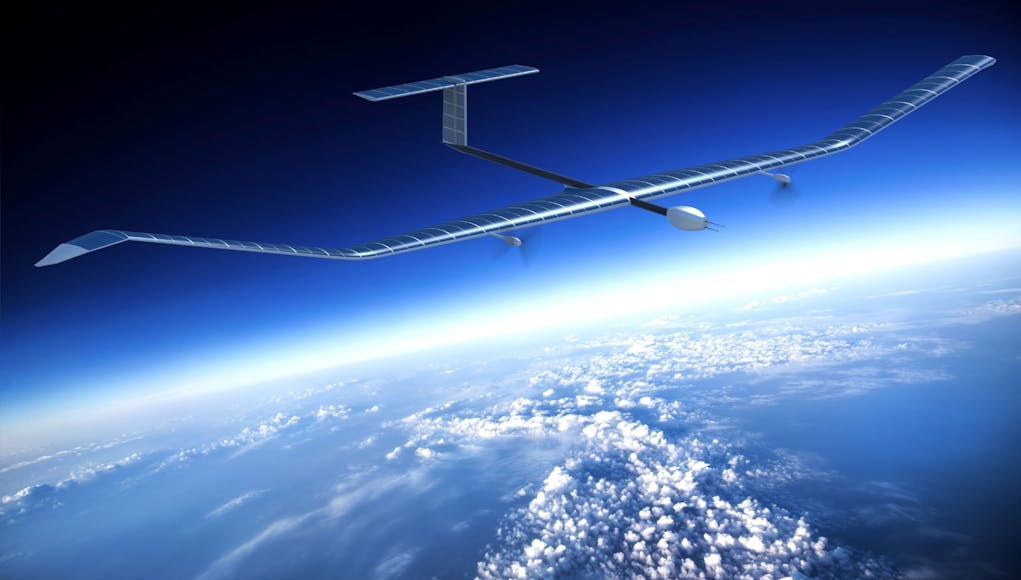 Zephyr S, Airbus’ High-Altitude-Pseudo-Satellite, has surpassed the current flight endurance record of an aircraft without refuelling of 14 days, 22 minutes and 8 seconds and is still flying.

The Zephyr aircraft departed for its maiden flight from Arizona, USA on 11th July 2018.

Airbus say this first flight of the Zephyr S aims to prove and demonstrate the aircraft capabilities, with the final endurance record to be confirmed on landing.

Airbus Defence and Space had earlier won an order from the UK for three solar-powered Zephyr high-altitude pseudo-satellite aircraft.

Zephyr is capable of providing persistent surveillance over land or sea, and hosting communications links, over the same area for months at a time without landing. The precise purposes for which the UK MoD will use its Zephyrs have not been disclosed.

The earlier variant, the Zephyr 7 HAPS, previously held the world record for 14 days continuous flight set in 2010. The solar powered aircraft charged its batteries from sunlight during the day.

According to Airbus, the latest generation Zephyr 8 has “a wingspan of 25 metres, is 30% lighter and can carry 50% more batteries than its predecessor”.

This Airbus say, enables the aircraft to carry heavier payloads for its surveillance and communications roles. The Zephyr 8 is designed to fly continuously for over a month before landing, being refurbished, and flying again.

As well as for military purposes, Zephyrs can be used for humanitarian missions, precision farming, environmental and security monitoring, and to provide internet coverage to regions of poor or zero connectivity.

The aircraft were construction at Airbus Defence and Space’s Farnborough, UK facility.

I know there have been a lot of complaints that this technology was sold to airbus. From what I understand it is still being developed and built inside the UK. Are there safe guards in place to keep this technology within the UK or could airbus just move everything to France for example my question also applies to Leonardo who own a significant amount of the UK’s radar, we and helecopters infrastructure (if that’s the right way of putting it)?

The technology was bought by Airbus when no U.K. based company showed interes in developing the concept. They moved the programme to Germany. Then, all of a sudden, MoD showed interest in buying it, so Airbus moved the programme back to U.K., buying a new facility to productionise it at Farnborough. Having made that investment and assuming MoD retains its commitment, I very much doubt Airbus will move it again. Airbus is pushing a commercial version, however, and if say Google were to buy 100 tomorrow, I suspect Airbus would open an assembly line in the US. The Farnborough facility… Read more »

I know this is for SF and Intell community use, fair enough, but would love to know who operates these on their behalf, as I cannot see those organisations training their own people.

No idea, but I suspect will be a combination of Cheltenham and Wadders, probably contractor operated?

Yes, you may well be right.

Would be useful for providing a rapidly, reconfigurable communications path for equipment operating at great distance from a home base. Such height and flexibility could surely be used for highly focussed comms beams, perhaps using laser, to avoid interception.

A great technology with many applications.

These are unmanned and could be cheaply produced. The airframe could cost less than the missile attacking it.

I’m not sure cheap is right, don’t they cost multiple millions a piece based on the UK order.

We should never have sold this, this should have been Britain’s aerospace industry’s product, we should have set up a factory to build them then buy them ourselves and export them. Which other country would dream of doing such a thing? This could, and should have been one of our exports after we had already done all the hard work.

We have to push ahead with Taranis (fighter version, bomber version, surveillance version, etc.) or Britain’s aerospace industry will not have any product of our own pretty soon (the same as in practically all other fields).

It’s worth pointing out that these fly at the same height at the u2 that was shot down but considerably slower. Just how useable would it be in a near peer opponent war?

In the overhead surveillance role point taken but as a communications relay the height gives it a big comms horizon (over 600 km to an end-point at ground level) and if the comms end-point was also airborne, e.g. perhaps a next-gen drone such as whatever might come out of the Taranis project, that comms range increases even further. The relatively lower height relative to a satellite in even low-earth orbit would also reduce latency which I would think would be important if wanting to maintain man-in-the-loop control, so I can still see some significant uses where Zephyr could comms into… Read more »

This aircraft’s story is the story of British industry on the 20th and 21st century. British engineers invent and build with government support, goverment funding is cut, the invention is bought by other nations who then claim credit and profit from it.

Yes, you’re right. But also look at the positives. The technology could have disappeared altogether. It was only because Airbus was prepared to take it beyond the concept stage that allowed the boys in Hereford to see its potential.

An ongoing test of HMG, UK business & UK investor mettle is Skylon – huge promise but it still needs a lot of extra investment, billions of pounds I think I read, to get it into production.

has anyone actually ordered one other than us? Fancy looking tech but is there a market for it?