Despite Russian warnings, HMS Dragon has successfully helped to ensure freedom of navigation in the Black Sea.

Freedom of navigation is one of the oldest and most recognised principles in maritime law, defined as “freedom of movement for vessels, freedom to enter ports and to make use of plant and docks, to load and unload goods and to transport goods and passengers”.

.@HMSDragon recently worked alongside the Romanian Navy in the Black Sea to support freedom of navigation in these important waters

The @RoyalNavy is furthering strong partnerships with @NATO allies by working alongside partners from Romania 🇷🇴 and Canada 🇨🇦 pic.twitter.com/0EiqlPqkhR

“The Black Sea Fleet’s forces and capabilities have started to track the UK Navy’s destroyer Dragon that entered the Black Sea.”

HMS Dragon’s main role as a Type 45 Destroyer is air defence and providing protection to other ships by detecting and neutralising enemy threats with the Sea Viper anti-air missile system. 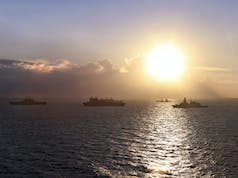 What is the Type 32 frigate?

George Parker
You can flag a comment by clicking its flag icon. Website admin will know that you reported it. Admins may or may not choose to remove the comment or block the author. And please don't worry, your report will be anonymous.

The Crimea is the 300+ year home of the Black Sea Fleet. Of course they are going to watch anyone coming close. So do we.

More F-35 jets being delivered to the UK