Another deployment milestone, @HMS_Richmond 🇬🇧 is back in the Mediterranean Sea! #CSG21 🙌 pic.twitter.com/bLO5L7ya8Y

The Strike group will travel over 26,000 nautical miles from the Mediterranean to the Red Sea, from the Gulf of Aden to the Arabian Sea, and from the Indian Ocean to the Philippine Sea, engaging with 40 countries.

This deployment will end in December 2021.

In Addition, there’s an Astute class submarine, an American destroyer and a Dutch frigate.

You can read more about that the Carrier Strike Group has been up to by visiting the link below.

Above picture , 3 baffles on top of the ship, one above the bridge, 2 at the back, what are they?

It’s an old picture. They are radar deflectors for the Sea Wolf fire control radars to help reduce unwanted reflections. This picture https://images.app.goo.gl/UeBuLuBaDLAujxuH7 shows Westminster (top) after Sea Ceptre upgrade without the no longer needed radars and baffles, and Sutherland (bottom) with them.

The RN could have gone for a three stage perl paint finish too, but thought that was too flashy….

Morning Farouk. And here is another question-off topic but pertaining to the RN. Wikipedia’s list of RN Aircraft carriers states that the Invincible Class Ark Royal displaced 20 000 long tons i.e. 2000 tons lighter than Invincible and Illustrious. Does anyone know why that should have been the case? A further mystery-in the Wikipedia article on Ark Royal it states that she was “slightly larger” than her sister ships(!?). I suppose she could have been larger in a key dimension and lighter for some other reason, but 2000 tons is a big lump of steel or something. Any of you… Read more »

I believe the Ark was slightly longer than her sister ships, but only by a matter of inches. It’s usually the case with ships of the same class due to minor discrepancies in the build process. For example, POW is said to be longer than QE, but only by a fraction. Ark had a few subtle differences when compared to her sisters, including, for a time, a steeper ski jump. Although the other ships had theirs changed, Ark’s always remained distinctive. She was also the only ship in the class to have phalanx. I wouldn’t overly trust Wiki, Geoff. Anyone… Read more »

Hi Lusty. Great info as always-many thanks. As to the Tons/tonnes confusion my source quoted all in tons so took it to be apples for apples. I would however admit to ordering 2 metres of 3×2(inches!!) from our local hardware almost 50 years since we converted here in SA, but at least we are ahead of our American cousins who still battle along with US gallons and feet etc.!! The quest to record and catalogue the correct information is a peculiarly British/Anglosphere trait-I loved the scene from Zulu Dawn when the Quartermaster handing out ammo was insisting on the correct… Read more »

No worries, and hi.

Back to tons/tonnes, yeah, wiki uses tons… but where did they quote from? ﻿😉﻿ A betting man would say that someone somewhere got a conversion wrong! Either that or they didn’t check for other sources.

Interesting snippets as usual. Maybe one day you’ll find out! The Invincibles were indeed described as ‘through-deck cruisers’. though they were a far cry from the big guns of the past!

The American destroyer (The Sullivans) is detached & on her way home.

Case of cut and paste. Mind you, be nice to find Daimond attached.

The sullivans has been long gone. And just swung back on her way home to escort the Chinese and Russian fleet around Japan.

No she hasn’t! The Sullivans has been to Toulon and Rota Spain, since leaving the CSG.
She only left Rota today.

When they reported a couple of weeks ago she left the fleet to return home in the pacific the assumption was probably that she was off to San Diego but if her home port is in Spain that would explain it.

The Sullivans home port is Mayport Florida. Most likely Rota is a logistics sto before homeward bound. 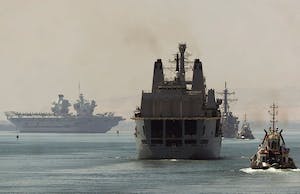