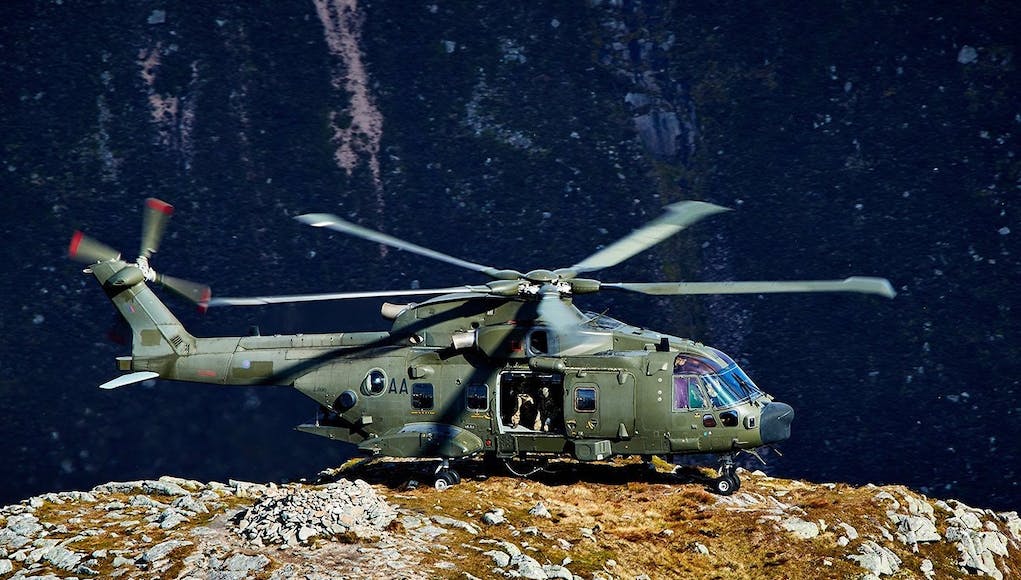 Personnel from Commando Helicopter Force teamed up with 45 Commando at RM Condor in Arbroath for Exercise Flying Scotsman.

“The Junglies took the Green Berets from the east coast to the south Hebridean Isle of Islay – more than 150 miles as the Merlin flies.

The changeable Scottish weather ensured some challenging conditions for the crew from 845 Naval Air Squadron.”

“This has been some of the most challenging flying I have done so far, the assault on the Isle of Islay was especially rewarding in a very unfamiliar environment.”

The squadron left their home at RNAS Yeovilton with two Merlin Mk3A aircraft to take part in Exercise Flying Scotsman.

The aircraft delivered 56 members of X-Ray Company and Recce Troop to Islay in the early hours of the morning as part of a helicopter assault force.

The Royal Navy say that the flight provided some essential training for the aircrew operating at night as part of a formation. Changeable meteorological conditions in the Scottish Highlands meant that the flying was especially difficult.

“With the Cairngorms on the doorstep of Arbroath, the opportunity to carry out some mountain flying was not wasted and a number of aircrew were refreshed in this particularly difficult skill, away from the usual playground of Snowdonia in Wales.

The spectacular scenery – enhanced by the flowering heather – not only afforded 845 NAS an opportunity to carry out some professional training but also allowed the detachment to indulge in some white water rafting on the River Tay.”

Leading Air Engineering Technician Dan Jayne said, “This has been one of the most enjoyable exercises I have been on, not only have we successfully engineered two cabs in support of 45 Cdo from a remote location but even managed to squeeze in some white water wafting adventure training.”

The fools want to downsize this lot, I think not,these are some of the best we have and should keep if not increase.

Its a shame they are facing the loss of HMS Ocean without a replacement and a possible manpower cut. The Royal Marines are by far the best amphibious troops in Europe.

Absolutely Ben – and I would go further and say the world. Pound for pound the RM are better than the USMC and anybody else for that matter. Amazing shortsightedness on the part of government. They pay lip service support for the Armed Forces but are utterly indifferent. Our political parties all should be ashamed of themselves!

“All politicians are rubbish” is unoriginal nonsense peddled by the hard of thinking. As for these potential RM cuts announced in our ever so trustworthy press, shall we wait for the facts before we wet our collctive knickers in indignation? Ocean was built down to commercial standards and was always designed to have 20 years in frontline RN service. If another navy wants to take that on and pay serious money for her, good luck to them. The carrier deignated as the LPH will be able to operate(typically) 9 Merlin HM2 (5 Crowsest) 12 Merlin HC4, 3 Chinnook, plus 6… Read more »

We all know why HMS Ocean is been sold. The problem is that there is no suitable replacement. To use a 3 Billion carrier in the role of a 200 Million LPH is beyond idiotic. With the advancement of area denial and anti-ship missiles the navy would never dare put one of the carriers within range of these systems which is needed to be able to deploy the marines and support them properly inland. The one carrier been adapted as a LPH does seem like fairy tales, I can hardly see much been done or able to be done at… Read more »

Spot on Ben – I agree; the issue is not Ocean herself but the lack of an adequate replacement. Given the state of our surface fleet, we will be hard pressed to defend POW or QE on the open sea never mind parking a mile or so off the coast of ‘badguyland’ trying to put our marines ashore! Secondly, assuming we proceed with the idiotic idea of using a carrier in the LPD role, then why aren’t both being modified? You know Murphy’s Law will show up – when we need the LPD carrier, you can bank on it being… Read more »

Hello Jack,
Welcome. I feel that I’ve been arguing these points by myself recently. It’s good to have someone “on board” who is positive. God knows, there is enough negativity on this site to sink the proverbial battleship.

Agree with you jack certainly would be a potent force.. would take quite a bit of planning to put 2 Bay class ships into one deployment though, but it could be done given enough planning. I think 12 F35’s with the marine transport helicopters would be better but i know your just giving an example of what could be carried, really does show the huge potential of these carriers.

Exactly John, I was giving an example of the capability that these ships will bring to the UK. If we look back to history and HMS Hermes during Op Corporate that ship sailed with 12 FRS 1 and 18 Sea Kings. During the conflict changes were made to the air group so that at its height there was 16 FRS 1, 10 GR1, 5 Sea King HAS 5 and 5 Sea King HC4. The ship also at some stage carried a troop of SAS and Royal Marines. PoW will do all that and more with some of the best aircraft… Read more »

There is no doubt in my mind that the RM force is the pinnacle of our infantry forces. You only have to look at their deployment record to know that they are constantly deployed. Now given that the army is short of its strength and also given the fact that the RM’s filled an important gap in all our previous conflicts I would like to see a transfer of headcount from the Army to the RM to make up the shortfall. If this means moving the RM into Army command – so be it. It seems to me if you… Read more »

You beat me to it pacman. Actually your ahead of because you’ve obviously thought things through. I don’t know if the numbers are right or wrong but with the Joint Rapid Reaction Force a vital U K asset it seems to me if there is one group that should be protected and strengthened with all services playing their part the JRRF is it.

Hi Geoffrey I have costed it all out and sent to the MOD earlier this year. It ends up being circa £2.5bn for the headcount, £2.5bn for kit, £0.5bn for infrastructure and £0.5b running costs. rough breakdown. This also gives us 70% more helicopters, vehicle and fighters and will totally renew the navy (but different to its current format). It even includes an allocation of £20k for personal equipment (rifle, uniform and such like). I get hammered for saying this but the USMC have audited accounts and have an airforce that is larger than the UK and France combined –… Read more »

Hope you don’t mind me asking pacman “Hi by the way” But where you say ‘division’ do you mean brigades, i mean just one division holds a lot of personnel..

* I mean when we had 100,000 regular soldiers still we only had 2 ready divisions plus 16 air assault brigade… with the Royal marine brigade too.

correction:Fire Team 4, Stick 8, Troop 16, Platoon 36, company 184. (5 platoons to a company to rectify the supporting fires issue and provide for 7 day self sustainment)

Thank you for the info: appreciate you sending all the detail, very interesting read.

My view is that the 4 main combat divisions should all be deployable at a Brigade level and the Carrier Battle Groups should be 1 on 1 off. what is really interesting about this proposal from my perspective is that the funding model is far more precise and targeted to a Division, therefore if 3Div start slacking off – get rid of the General in charge and replace. It will creat far more healthier competition. As you have 4 Divisions that are full spectrum, whilst being able to pull a full armoured Div together if needed. I also have to… Read more »

Hi Pacman… just got back to this site. Really good info. which I’m taking in. Will have a proper look later. Thanks.