Faslane is the second largest single-site employer in Scotland, after the Queen Elizabeth University Hospital in Glasgow.

Faslane is one of the Royal Navy’s three main operating bases, alongside HMNB Devonport and HMNB Portsmouth. It is best known as the home of the UK’s four Vanguard-class nuclear-armed submarines which carry Trident II D-5 ballistic missiles.

Figures released by the Ministry of Defence detailed how many civilian jobs at Faslane and Coulport are directly dependent on Trident. A Freedom of Information request sought out the size of the civilian workforce driectly relying on Trident, the MoD responded:

“There are 520 civilian jobs at HM Naval Base Clyde, including Coulport and Faslane, that directly rely upon the Trident programme.”

It’s important to remember that the 520 jobs mentioned are civilians and strictly those working on Trident missiles.

However, the base does not just support Trident armed submarines. In addition to the nuclear submarines, the base is home to 10 conventional surface vessels of the Sandown class mine countermeasure and Archer class patrol vessel fleets.

The Ministry of Defence also state that the number of people supporting the entire Trident programme, including the submarines on which the weapon is based, is around 6,500 jobs. According to a statement from the Ministry of Defence, around 3,500 are uniformed Royal Navy personnel, 1,700 are contractors and 1,600 are “other civilian employees”.

All 11 Royal Navy submarines will be based on the Clyde at Faslane from 2020, seeing the number of people directly employed at the base rising to 8,200. It is also understood that Scotlands ‘share’ of Trident is around £163 million a year and the annual spend generated by the base in the local area and the wider region is estimated to be more than £270 million per year, this includes spending by the 6,500 personnel based at Faslane in the local economy.

The number of jobs directly and indirectly supported by Faslane is just under 11,000; this comes from the 6,500 military and civilian personnel employed at HMNB Clyde and a further 4,000 created through the supply chain and the local economy according to an EKOS report commissioned by Scottish Enterprise Dunbartonshire.

Add that to the disproportionate funding through the Barnett formula. Nicola Sturgeon can keep her independence dreams firmly on the back shelf gathering dust. Yes, she can have independence but we want her to pay back that funding, pay to relocate the P-8s and the whole submarine fleet to the south, take the shipbuilding back too the south. Conservative estimates put the cost of this somewhere in the region of £200BN in total. Unless her precious independence voters want to 98p in the pound tax, she had better sit down, unless she would prefer to tell there Scottish people the… Read more »

dadsarmy – yes I know the truth hurts sometimes. Sorry for your pain. And here is some more. When will dear Nicola stop sending us the Scots overdraft bill of £15 Bn a year?

Rob et al FYI: Just a wee update on Scotland ……….. Nicola Sturgeon does not speak for the majority of Scots; she is not even particularly popular – indeed is a rather divisive figure in Scotland. Recent SNP majorities have resulted because the majority unionist vote was split between the three main parties. In this year’s general election, Scottish unionists finally discovered the joys of tactical voting – hence the decline in SNP fortunes! Myself and fellow Scots are only too aware of the “current state of the world”. Scottish people make a great contribution to this union, and receive… Read more »

I so hope you are right. The union is important to me, and so much of my British side is Scots. We are better as a United Kingdom!

There’s a lot of rhetoric Alan, and amongst the mud slung by both sides, people lose sight of the 90% or even 95% who are not activists in any way. They’ll vote, and largely that’s an end to it. Meanwhile many of the activists are too polarised, and with little respect for the point of view of the “other side”. It’s either “cult” or “cowards”. Well, boo to that nonsense. Whichever way it turns out, luckily that 90%+ will just want it to work out, and as you say, Scotland is viable and with world-class industries – whether independent or… Read more »

Oh my goodness. We did not ask for them to be placed here. Not our problem so will not pay to relocate them. We have been subsidising England for decades with our oil. You talk so much shite you should have a roll of andrews wired to your chin to clean up after you speak.

Well that is the most stupid argument ever. Does that mean the rest of the UK will refund Scotland for everything contributed through taxes, oil incomes, men spent in wars declared by the UK? Off course not that would be as stupid as what you are saying.

Okey doke, wasn’t going to comment, but others did. The first angle on Faslane as an employer, even within the Union, is the CND angle. Hardcore this isn’t just the SSBNs but SSNs as well as they’re nuclear powered, though some don’t seem to know the difference. In the unlikely event of the subs just moving away, that’s a straight loss of employment and economic activity. The Independence angle is easier. Firstly it’ll take 10 years for the “nukes” to move away, unless some work is already underway like moving the SSNs out of Devenport to allow “refurbishment”. So while… Read more »

You go for it Dads, they asked for it!

What a pipped dreamland dadsarmy lives in. There is absolutely no way any of those dreams are going to become reality. an independent Scotland will be a basket case unfortunately, rolling up debts of £15-20 billion per year on top of ALL the costs lumped on them for independence £200-300 billion a year + a proportionate share of the UK sovereign debt. There is no way Scotland will be allowed to leave the uk without taking on responsibility for its fair share of this debt. Faslane will close, all subs will move to Wales or south west England. All shipbuilding… Read more »

Scotland services 10%of all British debt at the moment and has been doing this for a long time.I do not think Scotland will be a basket case when it signs out of its Treaty with England.I do not know why English people like you hate the Scots so much and wish them ill, when all they want is to run their own country again.

No Defence
Reply to  Mr Bell

If that was the case, why do the Westminster government want Scotland to remain part of the UK. Lets face it, the Tories wouldn’t even subsidise a spare bedroom never mind a country 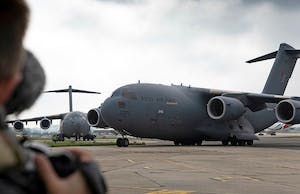 January 19, 2022
British transport aircraft are now in their third day of delivering "thousands" of anti-tank weapons to Ukraine in the face of a massive build-up of Russian troops.