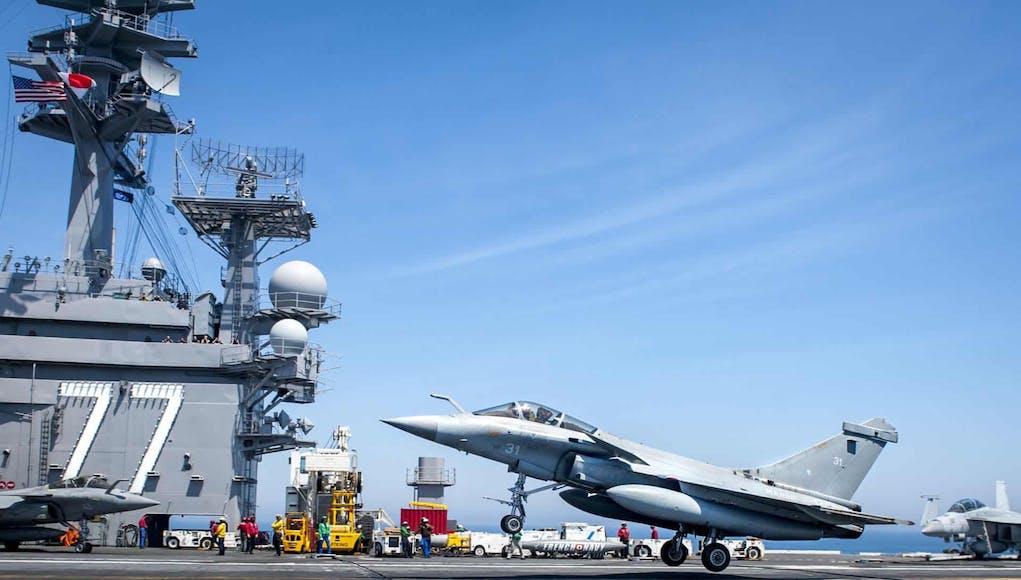 French sailors embarked aboard the USS George H. W. Bush to conduct carrier qualifications, a series of arrested landings and takeoffs from an aircraft carrier done regularly by squadrons to maintain their naval aviation proficiency.

The exercise consists of one E-2C Hawkeye and 12 Rafale French navy aircraft and 27 pilots looking to keep their skills sharp.

The French navy has one aircraft carrier, the Charles De Gaulle, which is undergoing a maintenance period. Approximately 3,700 U.S. and 301 French sailors are working together to maintain, launch and recover aircraft to strengthen interoperability between U.S. and French naval forces during Chesapeake 2018.

“A key piece of this exercise is not only to get [French aviators] carrier qualified. Once they’re fully qualified, that allows us to move into some more operational training, integrate them with our CAG-8 aircraft, and they can practice some higher-end training and missions beyond the basics of taking off and landing.”

The USS Bush strike group is underway in the Atlantic Ocean conducting carrier air wing exercises with the French navy to strengthen partnerships and deepen interoperability between the two nations’ naval forces.

Useful to help maintain French carrier capability during all those long periods when Charles De Gaulle is unavailable.

An obvious move for the French to reduce training costs amd maintain capability. What a good ally the US is!
The preferred choice for the French was a shared capability with the UK, one cats and traps carrier each but we went STVOL and things turned out differently. Maybe we will regret not developing a carrier version of Typhoon.
https://www.telegraph.co.uk/news/2018/05/16/dogfight-uks-pledge-buy-american-fighter-jets-could-play-like/

But the UK will have great interoperability with the US Marines, who will also utilise the F35B. And how many flat-tops do the US Marines have?

Yeh. We made our decision so no point in whingeing about not having F-35C cats and traps or indeed having F-35A. I think we have to make mixed Typhoon / F-35B fleet work.

Mark B
Reply to  Paul.P

I got the impression that the UK was trying to work with the French & US when we considered cats and traps however the cooperation appeared to fizzle out. Not sure why NATO allies can’t work together better and division just play into our enemies hands.

8 actually, with 2 in reserve and 1 building.

Yeah, makes a lot of sense to cooperate with US Marines just as we are planning to reduce size of Royal Marines and decommission Albion and Bulwark! Sorry, couldn’t resist the irony of it all…

Agreed, as you can see from my earlier posts in relation to this very subject.

Naval Typhoon should be on the table now not later including traps.

(Chris H) Paul P – I do believe it was the French who walked away from the carrier deal after we had engaged a French design team not us changing our minds. It was always the case the RN would have STOVL and the French CATOBAR and why the QE is basically passively engineered for CATOBAR as well as STOVL. The French also wanted nuclear power ….

Meanwhile we have two new 70,000 Ton carriers and 5th Gen aircraft on their way and the French have 10 year old Rafales, no carrier at sea and won’t for another year.

Yep. i think it has worked out well. I am going to go out on a limb and suggest that F-35B will have comparable strike range to F-18 and Rafale.

It is not particularly about reducing costs for the French Aeronavale, sending aircraft out to the US for carrier quals is pretty costly. The main reason is they only have one carrier and it is in deep refit at Toulon, until CdG comes out of refit they have no choice but to use US carriers to keep their pilots deck qualified. Whilst one of the reasons in 2010 to switch to CATOBAR for the QE class was interoperability with France a pretty serious problem cropped up. Whilst the Rafale could cross deck onto the QE class safely the F-35C at… Read more »

Point taken re the CDG refit. I knew about the F-35C issue for CDG. Notwithstanding Chris’ point that the QE carriers were always going to be stovl I do recall there was a period where we might have gone 1 cats and traps carrier had we had the courage to go EMCAT, and in that ( Davod Cameron I think ) period I can imagine BAE having kittens at the prospect of QE flying F-18s or Rafales.

We would never have gone with EMCAT regardless of the ill informed buzz back in the day. EMCAT is a smaller system that was being developed to launch small drones, it was never a backstop to provide a CATOBAR capability. It might still find a home on the QE class in the future as a drone launch solution. If we had gone CATOBAR American catapults and arrestor gear were the only game in town, anything else would have added even more cost and delayed the program even further. As for BAE Systems, they have rather moved towards systems integration than… Read more »

Anyone still upset at naming our newest Agincourt ?

Ahh you beat me to it!

Everybody does it but for some very PC reason we are not allowed and will offend.

I’m offended! I demand the name is changed at once or I will throw a massive strop. I know my rights.

Agree Steven. Are any of you offended by the number of US ships (and this exercise) named after battles we lost ?

Remember, the term “Don’t give up the ship” originated in the fight between the USS Chesapeake and the HMS Shannon. The Chesapeake had to be the unluckiest ship in the USN with two surrenders to her name… Don’t know how she did in RN service but she ended up as a watermill that worked for 160 years… 😀

No, it was a major British victory.

Other countries name their vessels after successful battles.

Great picture! Nothing beats seeing an aircraft recovering on the back of a carrier catching a trap. Beautiful