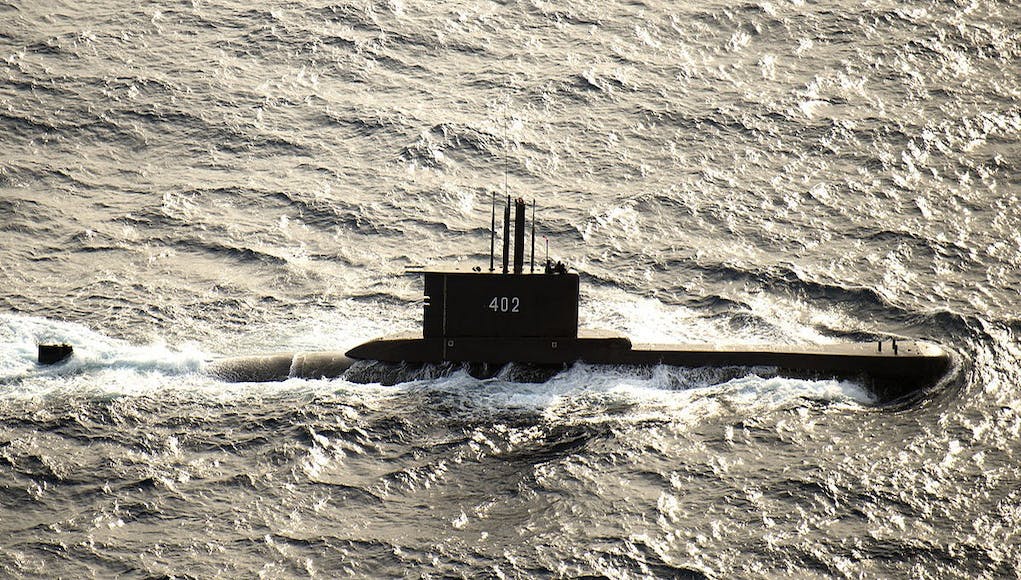 An Indonesian submarine has gone missing with 53 crew members.

An Indonesian Navy spokesperson First Admiral Julius Widjojono announced that Nanggala had failed to report for a post-maneuver brief following a torpedo live fire exercise in the Bali Sea off the coast of Surabaya, about 50 nautical miles north of Bali, an area where the water is reportedly around 700 metres deep.

In the press conference, the Indonesian government announced a search party of warships and specialised divers was being deployed, and revealed they had requested the assistance of the governments of Singapore and Australia to aid in the search. Soon after, the Republic of Singapore Navy submarine support and rescue vessel MV Swift Rescue was reported to have deployed to the Bali Sea.

The submarine is Cakra classvessel, a class of two Type 209/1300 attack submarines that were bought from Germany and commissioned by the Indonesian Navy in the 1980s. Nanggala is capable of firing four torpedoes simultaneously at four different targets and launching anti-ship missiles such as Exocet or Harpoon. The subs safe diving depth was increased to 257 metres and her top speed was increased from 21 knots to 25 knots as part of her last refit.

Presumably the NATO Submarine Rescue System will have already been in touch…?

Never good to read a story like this, thoughts are with the sailors and their families.

Hope they find them safe and sound and quickly.

I wonder if for rescues you could attach some flexible balloons to the sub with an remote vehicle to help float them up?

Type 209 German submarine, similar to the Argentinian San Juan that went down. Wonder if there’s any sort of design flaw? Hope the crew are found alive and well

I think in both cases the submarines were quite old. That is possibly one of the main factors. Good luck to the rescue teams. I hope any survivors are found quickly.

The sub was from the 80s, but it had been overhauled in 2010 by Daewoo in South Korea, including upgrade to propulsion and combat systems.

It’s just age isnt it? A sub from the 1980s is 40 years old. Has she had all her sea valves and seals checked and replaced?

Iirc, the San Juan was old and heavily modified (been stretched out at some point with an additional section), the modification being thought to be the point of failure, but I could be misremembering.

Hopefully there’s a range vessel or similar to narrow the search area down. Fingers crossed for all onboard.

Water depth is 3x SDD, 40yo hull, I think we need to keep everything crossed and hope MV Swift Rescue gets on scene sooner rather than later.

No idea what DDD/crush depth is on these but if its a hull (and backup) valve that’s gone there might still be hope. Can’t speak for the German ‘steaming bats’ but the pressure hulls on ours have given me a lot of confidence in the past. It is the nightmare though.

Yes, agree that the hull is strong, if any potential flooding can be localised and thus contained, might still be okay.
Then it all depends on the angle shes ay for any rescue attempt. Its still sh*t as you say.

Prayers for every seamen on the boat.

Sad news, it certainly doesn’t look good for all onboard at these depths.

A little more info from the Aussi Media: Indonesia asks Australia to help search for submarine with 53 on board ﻿Singapore: Indonesia’s military chief says the country has asked the Australian Defence Force to try and help locate a submarine that is missing north of Bali with 53 sailors on board. Contact was lost with the German-built submarine in the early hours of Wednesday morning after it undertook a torpedo training exercise about 100km north of Bali.An oil spill was discovered during aerial surveillance of the area several hours after the vessel disappeared. Air Chief Marshal Hadi Tjahjanto, the commander of… Read more »

I previously worked for James Fisher Defence (now just JFD) for a good few years. Extremely capable subsea operations company. They also operate the Australian SRS and the NATO SRS out of Faslane. If anyone can do it, they can. But if it’s descended to 700m then it’s unlikely I’d say.

God speed to all involved, praying for everyone.

Thanks for the updates Farouk.

When the words torpedo practise are followed by the words submarine missing it is never good; flooding, explosion and or both are on the cards – I do hope not. God speed to the crew.

I really hope the crew are OK. Particularly after the very sad Argentinian loss previously. It does make you realise why the UK retires its submarines after a well defined period. I would imagine that with a much smaller hull and therefore less compartments any major leaks would be much harder to control at depth even when fully closed up. I am assuming that the torpedo room would have to be minimum 2x length of a munition plus handling margin so proportionately quite long for a small sub – tube + mention + inner hatch opening + margin so the… Read more »

Oh dear. This looks grim.
Max diving depth 251m and yet water depth 700m. If she has gone to the bottom she will have crumbled.
Hopefully she hasn’t gone down.

I know its top secret but I wonder if an astute can even operate at this depth. 700m is pretty deep water.

Sad news, my thoughts are with all onboard and their families.

Their God in their Heaven, give them life. Thoughts.

Time to rally round. But the prospects look bleak.

Bloody dangerous job, every time you set foot in one, peacetime or war. It’s not like driving to SPTA to shoot some rounds down, every time you dive you are in a dangerous, alien environment and every dive is real. Respect and hope these blokes are recovered. Bit far for our submarine rescue people to be involved but I wouldnt be surprise if they are on standby, or even in the air as we speak. Any of you guys who are crazy enough to have been a submariner, update or advise either way, Deep32? Cheers.

Morning mate, like everyone else, keeping my fingers crossed for them. Good news is there is a safety ship/Torpedo Recovery Vessel on site, as its a torpedo firing a exclusion area will be declared, so, they should know roughly where she is. Recovery vessel from Singapore and Aussie SSPAG enroute, again good news. Unfortunately at that depth they are not getting out by themselves, so will need a rescue submersible to lift them off. The fact that they didnt manage to get upto the surface under there own power doesnt bode well, some sort of major flooding has obviously occurred.… Read more »

No worries, however, have to say Im not overly optemistic for their chances, its deep water.

Sad news. God bless all the crew wherever they may be.

Last in Indonesia in 2019 – despite the bad wrap it sometimes gets Indonesians in general are very welcoming to westerners.

Sadly, there is still no news.

Not seen anything on TV news about this SUB ,but God bless them.

Indonesian Navy have now confirmed that the SM has sunk in 850m of water, with the loss of the crew. A very sad state for all their families. RIP fellas.

A tragic loss of life.

Just posted and now seen your post mate. The boat was found in 3 pieces, be curious to see the outcome of the enquiry.

Feel for them, at least they got to ‘don the white woolly pully’.

I see its been confirmed that the boat has been found in 3 pieces, poor buggers.