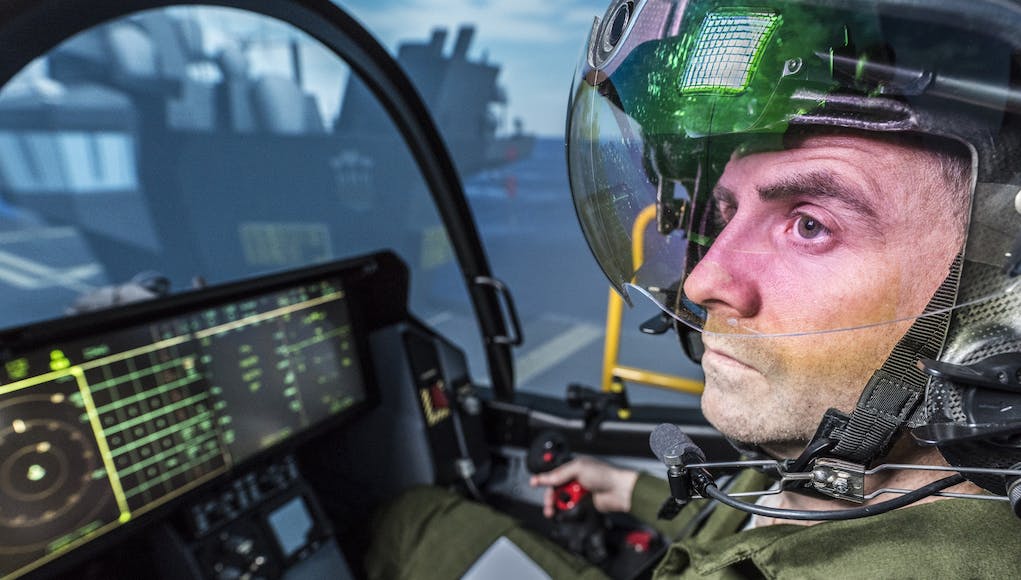 One of the UK’s leading F-35 Lightning test pilots has spoken of the importance of a unique £2m flight simulator developed by BAE Systems for use in preparation of flight trials on board HMS Queen Elizabeth, the UK’s new aircraft carrier, later this year.

As a member of the elite team of test pilots who will complete the first F-35 flight trials with HMS Queen Elizabeth, Commander Nath Gray is one of a number of pilots who has used the facility and this month completed the latest set of simulator trials at the Company’s site in Warton, Lancashire.

The F-35/QEC Integration Simulator facility replicates both the cockpit of the F-35 and the flying control tower (FLYCO) on board HMS Queen Elizabeth. Providing a complete 360-degree immersive experience for pilots, it has been used to simulate thousands of take offs and landings, ahead of HMS Queen Elizabeth crossing the Atlantic to the US, to ensure that the real-life flight trials are as safe and effective as possible.

The simulator applies highly specialised computational engineering to model the air wake of the ship, which is the way air moves around and behind the carrier and flight deck, to replicate the motions that F-35 pilots will feel in real life.

“The facility is unique in providing the most realistic environment and conditions that I’ve ever experienced in a simulator. The flying qualities, aircraft handling, air wakes and way the ship rolls are as real as it gets.

Over the past 18 months, pilots and Landing Signal Officers have used the simulator to develop the way the future Royal Navy will operate for generations to come.

BAE Systems engineers will be among those conducting the flight trials, which will be undertaken by a team of UK pilots including Commander Gray and Peter ‘Wizzer’ Wilson, BAE Systems test pilot and Short Take-Off Vertical Landing (STOVL) lead for the F-35 programme.

As good as any 4th generation aircraft even though it was the B version.

I had my doubts about the F35 a couple of years ago, but I very much like what I am seeing. It terms of combat and commercial success this is a winner.

I didn’t make it this year Mike. Was it one of our 4 Marham machines , or a LM test aircraft?

Both F35’s were awesome @ RIAT..and very loud. Also seeing the Lancaster, Tornado & F35B flying in formation as a tribute to 617Sqn was nice.

Agree about the Lancaster, Tornado and F35 formation.

Which I find quite staggering.

“There will be additional money for two new spaceports – one in Cornwall, one in Scotland – and a long-awaited commitment to build a new high-tech fighter aircraft that will eventually replace the Eurofighter Typhoon”.
https://www.bbc.co.uk/news/business-44840954

Still no hard data on the rolling landings.

We are still in a huge unknown as to the impact on the jet / parameters for landing / impact of weather / weapons load.

Jeff, I think the rolling landings are scheduled for the second phase of fixed wing testing early next year off the coast of the US.