The Minister visited defence company MBDA’s site in Filton, near Bristol, meeting with local graduates, apprentices and other employees working on the Sea Ceptor system.

The new air missile defence system can intercept and destroy enemy missiles travelling at supersonic speeds and will form part of the protection for the nation’s new aircraft carriers. The first firings were conducted from Type 23 frigate HMS Argyll whilst off the coast of Scotland.

“Sea Ceptor will protect our interests against threats both known and unknown. It will launch from the Royal Navy’s new Type 26 frigates as they keep our nuclear deterrent submarines and the UK’s two new aircraft carriers safe on operations around the globe.

Sea Ceptor supports 600 UK jobs and is yet another example of how our rising defence budget is being spent on cutting-edge kit to help our Armed Forces meet future threats.”

Sea Ceptor is being fitted to replace the Sea Wolf weapon system on the Type 23 frigates. 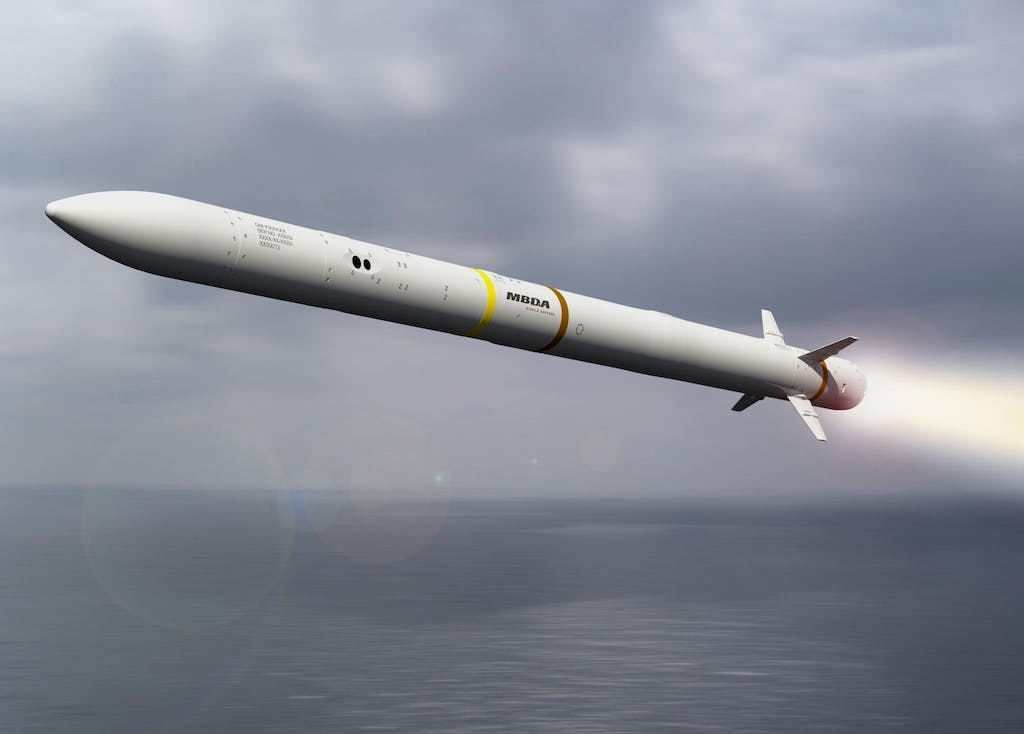 “This is an exciting upgrade in capability and a great opportunity for HMS Argyll to demonstrate what the missile system can do to protect our ships from future threats.

Sea Ceptor is an impressive and innovative system, demonstrating that the Royal Navy is at the cutting edge of technology and working hard to keep Britain safe. I am immensely proud of my ship’s company and the work they put in to make this test firing possible.”

HMS Argyll will conduct further firing trials of the Sea Ceptor system before she deploys to Japan next year.

However it’s not all good news as we reported last week, Royal Navy ships will lose their anti-ship missile capability in 2018 when the Harpoon missile is withdrawn with a replacement not due until ‘around 2030’.

We reported last year on the programme to replace Harpoon when Harriett Baldwin and her French counterpart signed an agreement to explore future long range weapons for the Royal and French Navies and Air Forces with the aim of replacing the Harpoon anti-ship missile and the Storm Shadow cruise missile as well as an array of French weapon types.

I May sound a bit daft here.. par for the course.. but why can we not just extend the life of the harpoon anti ship system? Surely it’s better to have something (even if dated) than nothing at all?

A question on the minds of everyone here, I think. I doesn’t make sense to me either.

Can someone clarify the effective range please, wiki states 1 to 25km and 45km for the extended version, an improvement over the 10km of Seawolf, but the video above claims 500 square km? Even if the radar software extends that distance, it’s not a protected range surely?

It’s a lot more than that. It’s a circle so the area is pi x R^2 where R is the range and hence the radius of the circle. Taking that 22km as the 20-25km approximation that’s approx 22^2 x 3.14159 = 1,520 square km. As I understand it the problem with missile range is that it is so variable depending on the target. It’s easy to visualise the fact that to hit a high altitude target a lot of the missile’s energy (fuel) needs to be expended in gaining height which then reduces the range (horizontal distance from the ship)… Read more »

Another potentially dangerous capability gap, but at least it’s one that could be (reasonability) rapidly filled if a UOR was called for.

Still, we are seeing some positive news as the RN refreshers the fleet for the 2020’s.

Let’s hope ( I can dream) the next SDSR sees the need for a larger Navy, at least reinstated to pre 2010 size.

Couple exports ordered already notched up for Brazil and NZ plus ER version to be procured by Italy and Spain?

Quad packs can be fitted in the SYLVER and Mark 41 vertical launching systems.

Hopefully these can be fitted t45 in place of aster 15, thereby increasing the missile load carried by those warships.

Seems we have a successful defence industrial project on our hands.

Or if we really are never going to get the FFBNW Mk41s on the T45s maybe put some dedicated soft-launch VLS in that compartment. If it is sized for 16 Mk41 (that’s right isn’t it?) it should easily fit 32 and maybe even 48 Sea Ceptor launchers. Given that all the clever stuff is in the missile canisters and the soft launch tubes are pretty much drainpipes it might not be appreciably more expensive than getting quad-packs for the Sylver and would increase missile load even more.

Finally a cold launch missile in the RN .
The part of ship will be happy…no more repainting after a firing.

Is the aster 15 more capable than the sea ceptor?