The Electro-Magnetic Laboratory Rail Gun is a 32-megajoule electro-magnetic laboratory rail gun being evaluated by the US Office of Naval Research.

The US Navy is pursuing development of the launcher system through two industry teams — General Atomics and BAE Systems – to reduce risk in the program and to foster innovation in next-generation shipboard weapons. The same amount of energy is released by the detonation of 4.8 kg (11 lb) of C4.

A 32 Megajoule prototype has been delivered by BAE Systems. This particular rail gun delivers fire from up to 220 miles in range, around 10 times the distance capable of standard ship mounted guns with rounds landing more swiftly and with little or no warning compared to a volley of Tomahawk cruise missiles.

“This fascinating technology, which uses high-power electromagnetic energy instead of explosive chemical propellants to launch projectiles farther and faster than any previous system, is currently in Phase 2 of the program.

During this phase, we will advance the railgun by maturing the launcher and pulsed power from a single shot operation to a multi-shot capability.

Auto-loading and thermal management systems will also be incorporated. We received a $34.5M contract from ONR in 2013 to pursue these efforts.”

BAE was awarded the contract to build the prototype in July 2006. The first industry-built launcher, a 32-megajoule prototype demonstrator made by BAE Systems, arrived at the Naval Surface Warfare Center (NSWC) Dahlgren in January 2012.

“We’re committed to developing this innovative and game changing technology that will revolutionize naval warfare.
The Railgun’s ability to defend against enemy threats from distances greater than ever before improves the capabilities of our armed forces.”
In late 2013, BAE received a $33.6 million contract from ONR to develop and demonstrate a HVP – a next-generation, guided projectile capable of completing multiple missions for the Electromagnetic Railgun, as well as existing 5-inch and 155-mm gun systems. 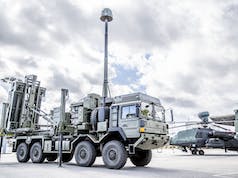 being a bit thick here; why does it produce smoke?

Burning of the air probably or parts of the barrel being burnt.