Fleet Flagship HMS Ocean makes her way out of Devonport to take part in a huge multinational NATO exercise in the Baltic Sea.

BALTOPS has run for more than 40 years and includes anti-air, anti-surface, anti-submarine and mine countermeasures warfare as well as amphibious landings. 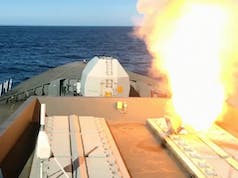 Ocean is an awesome asset, it’ll be a sad day indeed when she is decommissioned…

.. then returning home to be scrapped. .

Indeed, sad to see her go, she certainly put the hours in.

Why wouldn’t she be? She’s reaching the end of her hull life.

So was hms hermes 30 years ago when we sold her to India.. surprisingly shes still in service.. along with the Sea Harriers

You may not be aware that Ocean was built to much lower commercial standards. It’s not a fair comparison.

Yes I know.. she was built to similar standards to a commercial ferry/container ship

And 18 months further service is not “returning home to be scrapped”. Emotive claptrap is unhelpful.

Her poor hull must be creaking at the joints. She did sterling work for the Navy over the years, but, alas, it’s time to say goodbye to the old girl.

The shame is she is not being directly replaced. I remain sceptical as to the flexible and cost effective utility of the QE class in the LPH/LPD role especially in some littoral or high threat scenarios.

Indeed David, I was quite surprised that both the previous 2 governments and this one didn’t take the opportunity to replace like for like, only built with navy/military specs? Was it simply to do with money?

There are no spare Mistral class vessels.

From what I know of the Mistrals, they where fitted out to Russian spec – simply no good for us.

Have you served on her?

No. I know several that have and there verdict is it’s a heap with the wrong engines .

WATCH: A day in the life of a weapons engineer on...