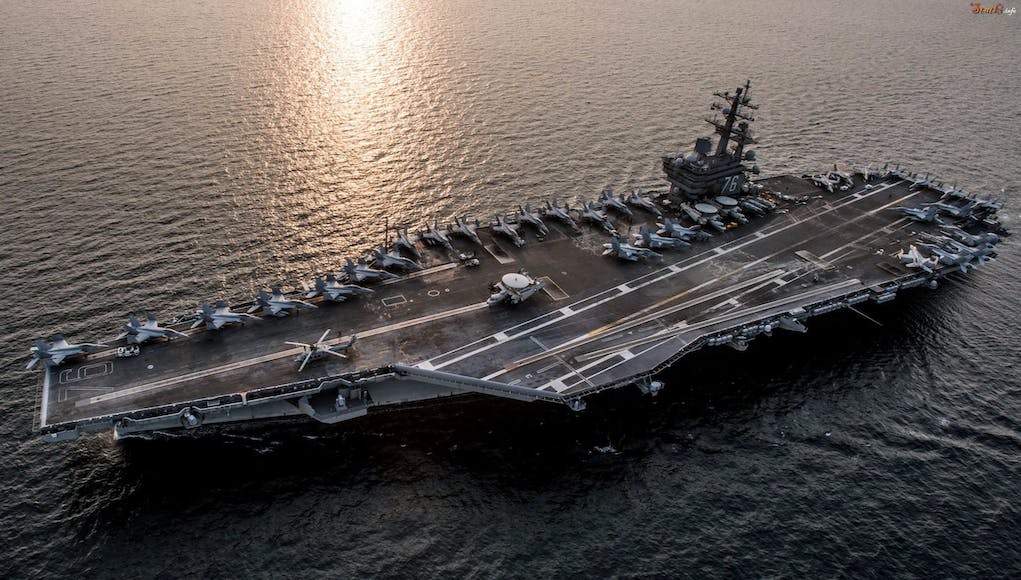 The Ronald Reagan Strike Group will be conducting training in the US 7th Fleet area of operations supporting security and stability in the Indo-Pacific region.

“[Ronald Reagan Strike Group] is very excited to get underway and begin to train and operate together, as well as with our allies and partners,” said Rear Adm. Marc Dalton, commander, Commander Task Force 70.

“As we get underway for these operations we will continue to represent the United States as the security partner of choice in the region, to ensure freedom of the seas, drive stability and security and to promote adherence to a rules-based international order.”

Reagan successfully completed sea trials in preparation for the patrol.

“I’m very proud of the hard work and diligence of all of the incredible Sailors in the strike group,” Dalton said.

“The Ronald Reagan Strike Group is ready to get underway to perform our mission in all respects and to answer the call of our nation and our allies.”

That’s a nice bit of parking at the front and back of the ship.

No kidding! I count 32 x F/A-18s on the deck (I had to copy the picture into Microsoft paint and zoom in a fair bit to untangle what was at the stern) plus 1 helicopter plus 3 x E-2s. I can’t quite make out what’s next to the two parked E-2s (just to the right of the “76” in the photo) but I don’t think it’s aircraft.

Might be the CODs – Everything folds on the C2s.

Thanks. In that case – gulp! – that’s another 3 airframes for a total of 39 on deck before we even venture into the hangar. You guys really don’t do things by halves do you. Impressive.

USN carriers used to stand to sea with ~ 90 aircraft on board. Nowadays it’s in the 60 – 70 range. Granted we have gotten down to operating just a few types but the loss of the A6 attack squadrons with their long legs is surely missed. Leaves a gaping hole on the decks as well as in capability…

The US Navy concluded that you can get higher sortie rates with smaller airwings.

What! Nonsense! We need a full deck of these (my favorite carrier jet design) beauties.

Bring back the Vigilante!

Of course they haven’t figured out how to replace the Intruder. The thing was cheap, robust, and could carry more ordnance further than anything but the USAF and RAAF F-111 Aardvarks. Once you got past it’s annoying habit of sucking up unwary deck crew it was a wonderful aircraft. Seriously though the USN truly let the communism was defeated parade go to their head when they removed the Intruders and Vikings from the carriers without immediate replacement. Not to mention the Spruance class fiasco where the Navy didn’t even bother putting them in reserve or making museum/recruitment tools out of… Read more »

It certainly gives whoever is responsible for spotting the aircraft and shifting airframes about a bit of a headache! What must it be like with a full hangar as well and even the standard operating tempo?

Here’s another thought, we have two shiny new aircraft carriers, when are we going to be able to have an equivalent shot of a UK carrier with a full deck. 617 squadron does not go operational until 2020, 12 aircraft, and the next RN squadron not until 2023, with another 12. By that time POW should be in full commission. So with the best will in the world we cannot actually fully load one ship until the middle of the next decade, with the other either alongside the wall or only employed as an LPH. It will be interesting to… Read more »

Security partner of choice… this says a lot.

People looking at that photo and then looking at our QEC and lamenting should stop.

You cannot compare to the USA.

You compare to other nations with flat tops.

Anyone wanting the sort of capability of the USA is either in fantasy land or needs to change nationality.

Daniele, don’t be rude! The question is entirely valid, if you are going to tote your capabilities around the bazaars you have to be able to back it up. The ships can carry forty aircraft. There are only enough Merlin HM2’s for one squadron at sea, and not enough F35’s in the buying programme to fill up even one of the ships to full strength, and that not for another five plus years. Looking good whils cruising around is not the same as a full war fighting capability. And please do not be rude about my nationality, that is just… Read more »

Nick C What ARE you on about?

My comment above was generic, not aimed at anybody in particular but the long list of naysayers on this site.

My nationality comment was suggesting people should become American then they could enjoy having a carrier full of aircraft!! Totally tongue in cheek just like my fantasy land comment!