The UK’s Littoral Response Group used the waters, shores and exercise areas of Cyprus to see how drones, autonomous systems, new vehicles and cutting-edge communications can transform the way the Royal Marines go into action.

“The lessons learned in Cyprus will help forge the nation’s amphibious forces of tomorrow, as well as the Future Commando Force – the reinvention of the Royal Marines as raiding specialists, returning to their commando roots… supported by the latest tech. Various traditional scenarios have been played out in the eastern Mediterranean – evacuations of civilians from a war zone, taking down terrorists and warlords – but with new tech, new communications equipment, new uniforms and new tactics, transforming the 21st Century battlefield. In all, some 40 different experiments and assessments were carried out, spread across nine real-time exercises. Six-wheeled/tracked ‘quad bikes’ have been tested to move two-man commando teams and their kit rapidly around the island. Overhead small drones monitored ‘enemy’ movements, providing leaders with unparalleled information on their foes – resulting in a successful assault a heavily-manned ‘enemy’ position. They shared Cypriot skies with large Malloy T-150 quadcopter drones – capable of carrying loads of more than 60kg over distances as much as 70 kilometres from ships or land bases directly to the front line. The Malloys were used extensively to drop ammunition, food and personal supplies to the men of 40 Commando as they fought their way through ancient ruins.”

“HMS Albion’s hosting of the capability demonstration in Cyprus has been a highlight of the LRG(X) deployment. The demonstration by our sailors and marines was superb, and showcased the quality of our Armed Forces, whilst providing an insight into how the Royal Navy is integrating future technology and new concepts. The event was also an important expression of the UK’s steadfast commitment to our allies and partners, as we work together to support regional stability within the Eastern Mediterranean.”

How do you EMP proof a drone? I wonder if not enough resources are being put into basic field skills and drills – whatever conflict comes it will be electronic in my opinion.

As to Royal doing what Royal do – go Royal!

I don’t think EMP proof is the right way as it would significantly increase cost and weight, better to make them jamming proof but expendable if required. The most likely scenario is they get shot down so having plenty of them available with a secure link is the way forward. Need to make them quieter as well so as not to give their position away…oh where is that buzzing coming from?….ah there it is 🙂 quick shoot it down 🙂

Or be resistant to one of these https://sputniknews.com/military/201708221056681106-russia-kalashnikov-device/ or GPS jammers or similar.

EMP would be quiet difficult to use in practice. Either you need it to be massively powerful to have the required range and so would take out your own gear in the process or you make it really small and then you have range issues and at that point an explosive would be more effective.

EMP for taking out a ship is potentially possible, but in land warfare the sides are going to be too close together to make it practical.

Secure links are pretty much derigure nowadays.
Lessons learnt regarding the down link to the original ROVER Terminals from drones in IRAQ/AFGAN was to encrypt them. Prior to that the “locals” could piggy back the video down link and see what the troops could see. All it took to achieve it was a simple VHF radio and a laptop. That little oversight was soon overcome.

That is shoddy r&d or insane cost cutting. Surely secure Comms have been a topic for decades.

Although this is the same MOD that failed to take account of hot climate when they give the operating temps to BAe during the procurement of the t45. You have to wonder if people get sacked for these basic mistakes that could costs lives.

Is strange you never see gear like this used in combat operations in Afghan. All the vids I’ve seen show an allied unit being ambushed and they have no idea where the enemy fire is coming from. All they have to locate the enemy is their Mk 1 eyeballs and some rifle scopes. They just wait for a US fighter or bomber to come and drive off the enemy. This gear needs to be put in the hands of deployed units ASAP!

Mini drones where in later years in the hands of the people on the ground and used to get a video downlink to show where the attackers where. It wasn’t just air vehicles either . Small ground drones were used as well. The plan now is to use the tech that was used in Afghan as a basis for a wider networked system of systems. Everything linked together and the info distributed quickly and easily to everyone who needs it as they need it. The RN Transformation teams have already started this and appear to be well ahead of the… Read more » 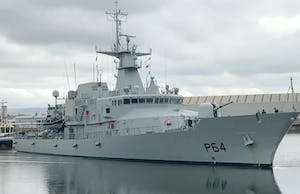