Home Pacific China steps up patrols over South China Sea as it attempts to... 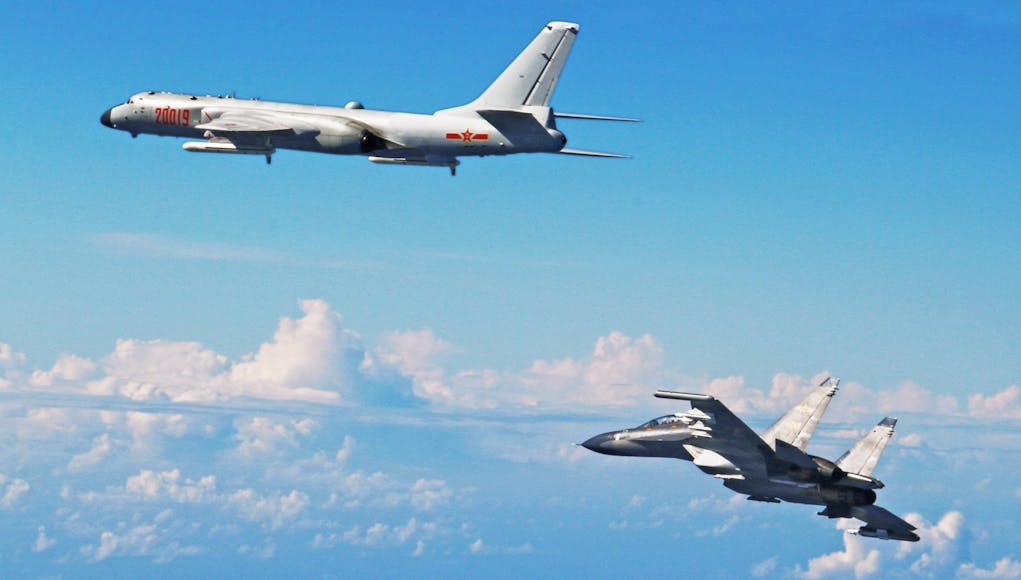 Recently the Peoples Liberation Army Air Force announced that it had been involved in a number of training patrols over the South China Sea.

These exercises covered the Bashi channel between Taiwan and the Philippines in the south and the Miyako Straight Japan and Taiwan to the north. The Chinese Air force used the long range H-6K bombers. These highly capable aircraft have nuclear strike capability and can host a vast array of anti-surface, anti-ship ballistic missiles and LT PGB laser guided bombs.

The geographical location of these exercises have historical as well as physical importance. PLA Air force spokesman Shen Jinke announced to the media that the training was initiated to “improve maritime real combat capabilities and forge the forces’ battle methods”.

Shen also stated that the patrol showed Chinese capability to breach the ‘First Island Chain’. The concept of the ‘First Island Chain’ was developed during the Cold War in the 1950’s by US diplomat John Dulles. The island chain of channels and straights stretches from the tip of Japan through to Taiwan and the Philippines. These islands were seen as a physical barrier or containment from Communist China during the Cold War era. China’s new assertion is a similar approach to that of their Russian allies. As Russia prods western defences with Tu-95 Bear bombers along numerous NATO borders in Europe and North America, China seems to be following their example.

The key difference for China is that it seeks to assert its sovereignty over the South China Sea and this could eventually include over Taiwan, the breakaway republic.

Chinese President Xi Jinping’s made it clear in his Party Congress speech in October that Taiwan was still an active concern:

“[We will] resolutely safeguard the national sovereignty and territorial integrity and will absolutely not tolerate the tragedy of the country’s split. Any activity aiming to split the motherland will be firmly opposed by all the Chinese people. We have a firm will, sufficient faith, and adequate capacity to defeat any intention of ‘Taiwan independence’ in any form.”

The rhetoric over Taiwan was upped further when it was reported in The Xinhua that the PLA Air Force commander the Key Party Congress, “planes circling the island of Taiwan would become routine during their training”.

As China’s military continues its modernisation and expansion Taiwan has increased its purchase of American defence hardware. In June, the US agreed to a $1.42 billion arms package.

In September Donald Trump offered to relax arms restrictions on ‘sophisticated’ military gear to South Korea and Japan in the wake of the recent North Korea threats. The potential sales of highly advanced missile and radar systems poses a risks to China’s assertion of sovereignty in its own back garden. China’s increase in military patrols and exercises would seem to be a reflection of its regional ambitions and a way of keeping pressures on its ideological opponents.

It intends to dominate the region through military backed mercantilism.

We should stay very close to India and Japan whilst working hard to be a trusted third party including with China itself.

China has shown much greater restraint re: Taiwan than the US ever has with Cuba, which has never been a part of the USA.

That too! Also China sees Taiwan as China and takes a long term view it will come back as HK did.

At the end of the day to think the UK with our armed forces in their present state could influence China paper tiger springs to mind perhaps our political rulers could use some of the soft power that they seem to believe in i.e.the overseas aid budget but we probably borrowed the money of them in the first place.

The whole Chinese claim to the south China is ludicrous. The most widely claimed reason is due to anchinet Chinese saliors being the first to sail it’s waters, but is thay was applied world wide it would unleash a chaotic sprawl of claims.

The south china seas are cjina’s back yard.
they have home advantage and closeness to their home ports, air bases and missile batteries. Despite the bluster I do not think even if Japan, South Korea, India, USA and Australia united they would be hard pressed to face down China in its own backyard.
Oyr military are a non existent distant echo to what they used to be. Our political masters have no interest in uk armed forces, capabilities or size, they continue to invest the minimum budget to keep the uk armed forces at a minimal force size.