Approximately 16 hours earlier, she was involved in a collision with the Philippine-flagged merchant vessel ACX Crystal while operating about 56 nautical miles southwest of Yokosuka, Japan according to a press release.

Vice Adm. Joseph P. Aucoin, commander, U.S. 7th Fleet, along with many family members, were on the pier when the ship arrived.

“This has been a difficult day. I am humbled by the bravery and tenacity of the Fitzgerald crew. Now that the ship is in Yokosuka, I ask that you help the families by maintaining their privacy as we continue the search for our shipmates.

“I want to highlight the extraordinary courage of the Fitzgerald Sailors who contained the flooding, stabilised the ship and sailed her back to Yokosuka despite the exceptionally trying circumstances.”

According to a statement to the media:

“Shortly after the collision the U.S. made a request for support from the Japan Coast Guard (JCG), which were the first on scene and continues to be lead for search and rescue efforts. The Japan Maritime Self-Defense Force (JMSDF) ships JS Ohnami, JS Hamagiri, and JS Enshu were sent to join the JCG ships Izanami and Kano. USS Dewey (DDG 105) served as an escort for Fitzgerald and has also returned to Yokosuka.

A U.S. P-8 Poseidon aircraft is working in concert with two JMSDF Helicopters and a JMSDF P-3 Orion aircraft to search the area. Names of the missing Sailors are being withheld until the families have been notified.”

The collision affected Fitzgerald’s forward starboard side above and below the water line, causing significant damage and associated flooding to two berthing spaces, a machinery space and the radio room, which damage control teams quickly began dewatering.

If only the USN had a vessel like RFA Diligence, this is exactly the kind of scenario it is held in service to deal with.

Certainly shows RFA Diligence is a capability that the RN can’t afford to lose!

So RFA Diligence was available anywhere in the world where there was the possibility of an accident?
What are the odds….
Diligence was a decent asset but it was never a sea going AA van !
Local tugs towed the vessel to port.

Dilly did not manage to do a lot for Southampton or Nottingham or Brazen. All major incidents ( Southampton being hit by a container vessel in a very similar manner) that where dealt with by the crew until the ship got to port with tug assistance. 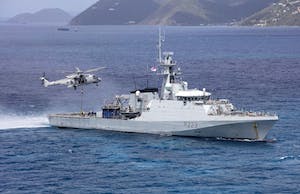