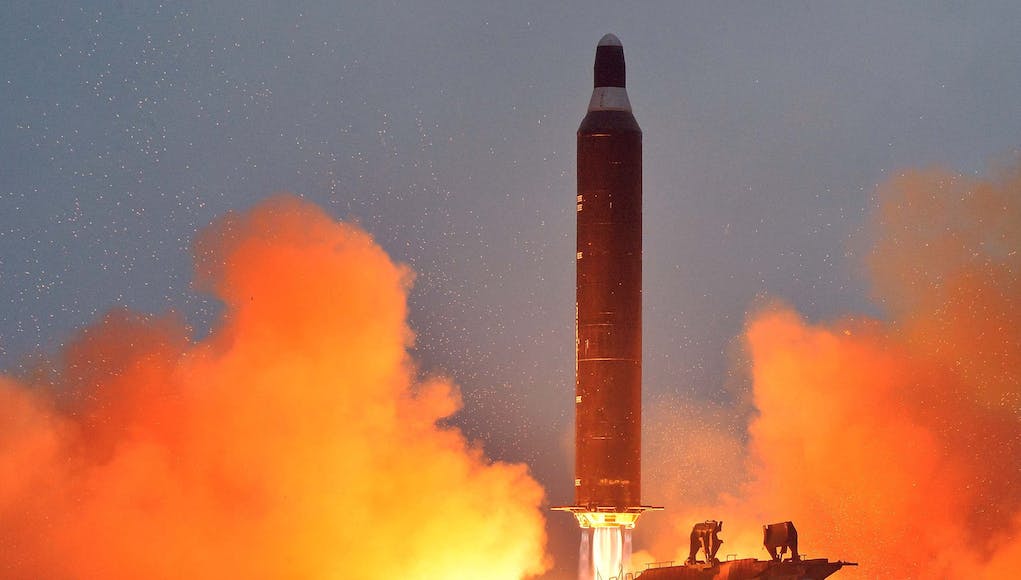 In an interview with the Evening Standard, Gavin Williamson stressed that North Korea was a real threat to the UK.

In the interview, found here, he said:

“This is not just a problem for the United States. This is a global problem. Britain has to step up in terms of dealing with it. There are threats emerging right around the world. Britain is a global player, it’s a world player. We will never hesitate to deal with aggression and threats.”

Recently North Korea fired an intermediate range ballistic missile eastwards over Japan and into the Pacific. This was described as the regimes latest provocation amid high tensions over its banned weapons programmes.

North Korea launched a Hwasong-12 ballistic missile that passed over Hokkaido. The missile travelled 3,700 kilometres and reached a maximum height of 770 kilometres; this is the furthest any North Korean IRBM missile has ever travelled.

Initial estimates suggest the Hwasong-12 would have a maximum range of between 3,700km and 6000km.

Additionally, much was made of the links North Korea has to various cyber attacks. Similarities were spotted between a major cyber-attack earlier in the year and code used by a group with links to the North Korean government say Kaspersky and Symantec.

Similitude between #WannaCry and Contopee from Lazarus Group ! thx @neelmehta – Is DPRK behind #WannaCry ? pic.twitter.com/uJ7TVeATC5

NHS services across the UK were hit by a large-scale cyber-attack. Hospitals across the country have reported being hit by the attack and in some instances in England, patients are being turned away from A&E and operations are being cancelled.

Britain must deal with a fixed defence budget and haters of DFID.

What is required is a concerted effort by the principle World powers, to develop systems that address both missile and cyber threats. Some sort of electronic zapping of any transmissions emanating from North Korea that could be potentially disruptive, should be intercepted. I guess such devices are available, but are confined to the secret list, as they could be a first line of defence weapon? In regards to missile strikes the UK should seriously consider purchasing current interception systems, regardless of their country of origin. If in the unlikely event the UK is targeted we could expect no more than… Read more »

I still think the UK should stay out of it if it comes to armed conflict.

But if North Korea has indeed launched Cyber attacks on the UK I hope we are replying in kind.

And the UK does have an offensive cyber capability to retaliate.

I doubt there will be any serious planning regards civil defence as that was mostly closed down at the end of the Cold War.

The Japanese government today signed off on approving funds for two Aegis Ashore facilities to be located in the north & south of their country.

Around £700m each including the 24 x interceptors going by the prices at the Romania & Polish facilities.

If Britain wants to invest in BMD capabilities, the solutions are there & don’t cost the earth.
It is within range if NK went full retard and sent a missile or two our way.

The most alarming part of this story is the Def Sec. He’s bloody desperate to get up the US’s derriere even if it means nuclear war. I hoe with all my heart that N.Korea goes the way of all dictatorships but this is not our fight. The only hopeful thing I can think of is that Private Pike , the least derogatory nickname i’ve found for him has zero credibility with anyone heer or anywhere else.

North Korea is everyones fight either directly or indirectly The Globe is tiny now compared with 50 years ago , what happens the other side of the World is effects us like it or not

‘Deal with’ ?
How?
Can’t be militarily. The UK military is too small to counter NK.
They’re not a big enough player to go against NK, let alone the other powers in NE Asia.
The South Koreans are relying on the US for defense not the UK.
The UK couldn’t muster enough and NK isn’t exactly afraid of the UK, nor is China or Russia.