The Ministry of Defence have confirmed that said the competition to build the vessels will begin next year and will see “a significant proportion of the build and assembly work to be carried out in the UK”.

The competition was initially offered internationally, meeting strong criticism from all sides of the political spectrum and even the UK Defence Journal.

The tendering process for the ships was suspended last year, with some suggesting the process was being restructured to better favour British bids.

“Shipbuilding has historically been a British success story, and I am determined to revitalise this amazing industry as part of this Government’s commitment to build back better. The Fleet Solid Support warships competition will be the genesis of a great UK shipbuilding industry, and allow us to develop the skills and expertise for the shipyards of tomorrow.”

The Ministry of Defence have also stated that “international companies will be invited to work in collaboration with UK firms to feed in their skills and expertise” however “the successful manufacturing team must be led by a British company”.

“The news that the successful bid will be led by a British firm is welcome but it only promises a ‘significant proportion’ of the work will be completed in Britain, which could be open to all sorts of interpretation. The facts of the matter are that deSpite some recent good news, British shipbuilding continues to hang by a thread.

The UK built up world class skills to deliver the aircraft carrier and FSS will be a vital bridge to maintain the industry to the next round of naval procurement, which could guarantee jobs for a generation. Without FSS supporting every shipyard in the UK we will lose those jobs and those skills forever.”

Earlier in the year, The National Audit Office released a report titled ‘Carrier Strike – Preparing for deployment’, the report examines the MoD’s management of the programme since 2017 and the risks towards achieving Carrier Strike’s full capabilities.

Under the Carrier Enabled Power Projection concept, the operational freedom of a carrier group relies on support ships providing munitions and stores where and when they are needed. However, delays are posing risks to the programme say the NAO.

“The Department has been slow to develop the solid support ships which are crucial to operating a carrier strike group. Carrier Strike relies on the sustained availability of munitions and stores, such as ammunition and food. However, the Department has only one ship able to resupply a carrier group, which slows the tempo and reach at which this can be done. It has long been aware that this will restrict the operational freedom of Carrier Strike but has not yet developed a solution.

In November 2019, the Department stopped the competition to build three new support ships due to concerns about value for money. It believes this will delay the introduction of new ships by between 18 and 36 months, making it uncertain the first new ship will be operational before the existing support ship leaves service in 2028. The Department will also incur additional maintenance costs while it uses its existing support ship as an interim solution.”

The Department has long known that deploying Carrier Strike will depend on two types of support ship:

In April 2020, the MoD was reviewing its options and the impact on the delivery schedule. It has recognised that achieving full capabilities of a carrier strike group depends on the new support ships being available from the mid-2020s. 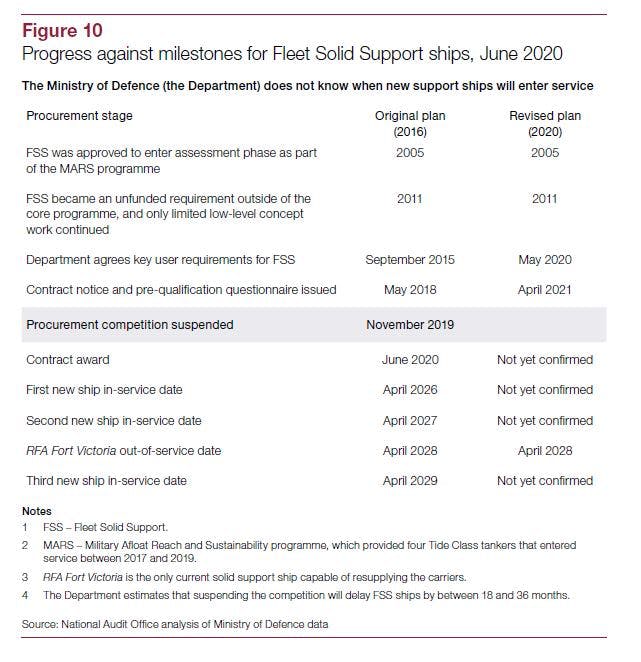 The NAO say that the MoD will need to assess the impact of any delay when it considers whether it has met the final CEPP programme milestone for full operating capability in 2026.

“In the meantime, only one of the three current Royal Fleet Auxiliary solid support ships is capable of resupplying the carriers. RFA Fort Victoria entered service in 1994 and is due to retire in 2028, having already been extended beyond its 25-year service life. The Department has allocated £2 million to modify RFA Fort Victoria so it can replenish the carriers at sea and in 2016 budgeted up to £42 million to operate the ship to 2028. Having only one support ship with limited cargo capacity slows the tempo and reach at which the Department can replenish a carrier group. In addition, the Department will have restricted options for deploying the carriers for much of 2022 because RFA Fort Victoria will be unavailable due to major planned maintenance work.”

However, the MoD now expects there will be a delay of between 18 and 36 months to the new ships entering service, meaning the first ship would be operational between October 2027 and April 2029.

Remains to be seen as to what ‘significant proportion’ means as the union general secretary says. Building sections wouldn’t necessarily reinvitalise the industry. Build here and fund the business to train and sustain employees. I’m interested to see the impact of Brexit on the yards with the likes of the ACA and Cammel Laird both having relied on a lot of (high skill and hard working) Eastern European workers. Not sure if the wages of these guys will be high enough to count as skilled post-Brexit (if include their overtime sure it will, they worked like mad). But if not… Read more »

If the Yards in Scotland are fully booked and work needs to start in 2021 does that mean only Cammel Laird and H&W will be bidding for it?
H&W seem to be the favorites with their partnership with Nevantia, would that then mean it will be a Spanish design, or will they go ahead with the BMT design but lean on Nevantia’s expertise when it comes to construction?

The problem H&W have I my opinion is with the need for the winning team to be U.K. lead. Given the current tiny size of H&W and their lack of current shipbuilding experience I don’t think they are a credible bid leader.

I agree I think H&W only has 100 direct employees these days. Almost all of the welders, fabricators etc will be subcontractors from Scotland or wherever they are based. I think that’s how most of the yards operate anyway. The facilties will need a big overhaul though, there are plenty of cranes but not sure if there is much else. Have all of the ship yards involved in the carrier alliance now closed except the two in Scotland

Yep, we’ve got orders from Ukraine and Babcock have over 30 expressions of interest in the T31. I’m sure Babcock would rather slot in some foreign builds to the T31 and quite frankly I’d rather see UK build foreign ships. That’s the end goal of the ship build strategy.

Really is no need to extend this out massively, there are plenty of designs out there, what I would suggest is that we take stock of all our “big ships” and decide what capabilities we will need going forward, common platform and drumbeat that we need. As I have said previously, we could go for FLO FLO’s with mega modules and probably have a fleet of 12-16 to replace the points, bays, forts, albions and argus This would not only be cheaper but far more flexible if we create the right mega modules. This would probably require another Goliath crane… Read more »

Hi Pacman, I do like the general concept. As you may have guessed I am a big fan of flexibility and adaptability and this idea has those features on bucket loads. A couple of points that I can unink of straight away is that we could spread the design and build of the mega units overtime and throughout the wider engineering industry as we would not need all of the capabilities until existing vessels, including new ships, paid off. The concept lends itself to a rolling programme in line with the National Ship Building Strategy and could play a significant… Read more »

there are a number of pluses to this and think defence has an amazing article on FLO FLO’s – so this is not original thinking by me. The article on TD really changed my view on what our RFA/Amphib fleet should/could be and you are right in stating we can have Mega modules build anywhere, we can also pick up the hulls commercially if we wish and concentrate on the modules only This lends itself to a Liverpool/belfast link up I think adding capacity and capability to those 2 yards and a steady drumbeat over the next 25 years we… Read more »

I think most of the BMT designs are based off the same Hull. I’m trying to think how many hulls we need that would give a continuous cycle.
3 FSSS
2 dedicated hospital ships
3 Bay class
2 Albion, all 7 could utilise the same Hull (with large land deck for 4/5 Helecopters) similar to the mistral
2 replacents for the wave tankers and some of the survey vessels will need replaced but that would be a smaller hull.

Those are weasel words if i have ever heard them. What a disappointment.

If we take October 2020 as the start of this project how long will it take to get a ship in the water , have we got a design already , could we see what other navies have got that works for us and buy the rights to reproduce them. 10/15 years in service is unacceptable

We need one common 200m hull (E.g. Tide Class) that we can use to replace all RFA, Albion and Ocean class vessels with. This common hull should be built in modular form in ship yards around the country.

Levi Goldsteinberg
Reply to  A. Smith

Trouble is, that is logical and sensible – so there’s precisely zero chance the government will do that

See RSS Sir David is due out with CL stating it their most complicated single vessel build to date. With that and associated issues hopefully behind them we cannot afford to let the knowledge lapse again. For a major economy, let alone an island state, our overall shipbuilding capacity is lamentable. Something that we will come to regret in an increasingly unstable world, if not addressed.

So British ship building is hanging by a thread, I think a raft of other industries would take issue with that comment. Trouble is you’d be hard pushed to name more than a handful of other countries who’ve spent more on building ships than the UK. 8 T26 @ 1 billion each 5 T31 @ 1.25 billion 7 Astute class subs @1.25 billion 4 Dreadnoughts class subs not sure of the cost per sub but at say 1.5 billion 2 Carriers @ 6.5 billion 5 OPVs @0.6 billion T45 engine fix 0.35 billion Polar research ship 0.2 billion Not including… Read more »

Agree Robert and in general it would be wonderful to see H&W rise again. from my perspective such an investment in spreading this work over the whole of the UK including Belfast would go a long way to repairing the damage done to the Union by the Brexit process. The basic infrastructure is still there in the Belfast lough.

There’s a statement signed off by a lawyer if I ever saw one.