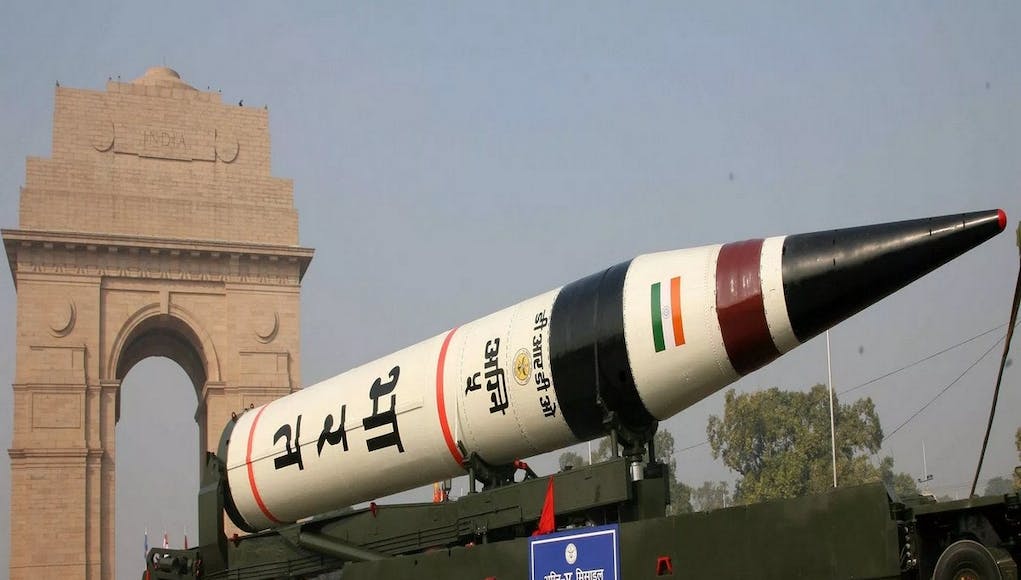 Agni V, a long-range surface-to-surface nuclear-capable ballistic missile, was successfully launched from a canister on a road-mobile launcher at the Dr Abdul Kalam Island off the coast of Odisha, India.

The launch operations were carried out and monitored by the Strategic Forces Command in presence of Scientists from Defence Research and Development Organisation (DRDO) and other associated officials. Local media report:

“Agni-V is part of the Agni series of missiles, one of the missile systems under the original Integrated Guided Missile Development Program. DRDO chief V.K. Saraswat initially declined to disclose the exact range of Agni-V.

Later, however, he described Agni V as a missile with a range of 5,500–5,800 km. Du Wenlong, a researcher at China’s PLA Academy of Military Sciences, told the Global Times that the missile has a range of around 8,000 kilometres (5,000 mi).”

All the mission objectives were successfully achieved. This launch comes after a series of successful launches of the missile, reported local media.

The BBC reported that the launch marked the moment India joined an “elite nuclear club” that also included China, Russia, France, the US, the UK and possibly Israel.

NATO Secretary General Anders Fogh Rasmussen stated that they did not think India was a missile threat, nor a threat to NATO and its allies, despite India’s advancement in missile technology.

I don’t trust Indian junk for some reason. And We still give them hundreds of millions in foreign aid each year and hundreds of millions of Indians still crap in the streets or beaches and train tracks due to no toilets! Oh and the 50+ millions starving homeless children in India is shocking! India needs to focus on that stuff before long range nuclear missiles! What a joke, it’s not like they will be mass exporting them is it! Why don’t we British and french jointly build a new modern long range nuclear missile or why haven’t we? We do… Read more »

“I don’t trust Indian junk for some reason. And We still give them hundreds of millions in foreign aid each year and hundreds of millions of Indians still crap in the streets or beaches and train tracks due to no toilets! Oh and the 50+ millions starving homeless children in India is shocking! India needs to focus on that stuff before long range nuclear missiles! What a joke, it’s not like they will be mass exporting them is it!” Sigh, soft power has its worth! What we pay to India these days is peanuts, £52million last year and £46million this… Read more »

The UK opted out of the space race, after letting France have the Black Arrow first stage to develop their own satellite launcher. Now France is the premier space power in western Europe. I think they have gotten back their investment several times over. Many nations use French Guiana to launch satellites, few use Woomera anymore.

Probably more that the French will demand all the design and manufacturing work, then pull out and steal the tech, lumbering us with the cost of it.

Fully agree with you in India though; a nation that can afford a space programme and to build their own nuclear missiles should also be able to help their own poor. If they choose not to then we shouldn’t be picking up the bill.

Worth every penny of our foreign aid? I think not. However, that Indian forces played a distinguished and crucial role in the destruction of the largest single army Imperial Japan placed in the field is worth our gratitude and remembrance. Unfortunately modern India only venerates the Axis supporting Indian National Army lead by Bose, a fascist.

That’s great, but for how long do they get to use that credit? India and Pakistan each have larger nuclear forces than the UK.

Yes every colonial countries thoughts reflect to your comment, Bose was facist. If he was a facist rest of them were racist. We every Indian respect him except pet dog of British Government. So till now fear to reveal his death mystery.

A Fascist? Is that what you call an Indian nationalist? See just because he teams up with Nazis and then with Japanese doesn’t mean he’s facist, it is completely understandable if his army wanted to kill English. I mean that’s what you get for ruling someone and expecting them not to kill you. What you should be condemning is Churchill for killing 3 million people in 1943. Too bad he didn’t get o to kill more of your ancestors. Alas Muslims will do that now with you. overrun your capital and do all sort of bad things, like acid attacks,… Read more »

And how many millions of £’s are we still giving India in aid ?

Writing off the Indians, oh dear!

I see us British haven’t learned a thing or two about respect and culture since the days of empire.