Home Pacific A militarised Japan: A potential start of a new arms race? 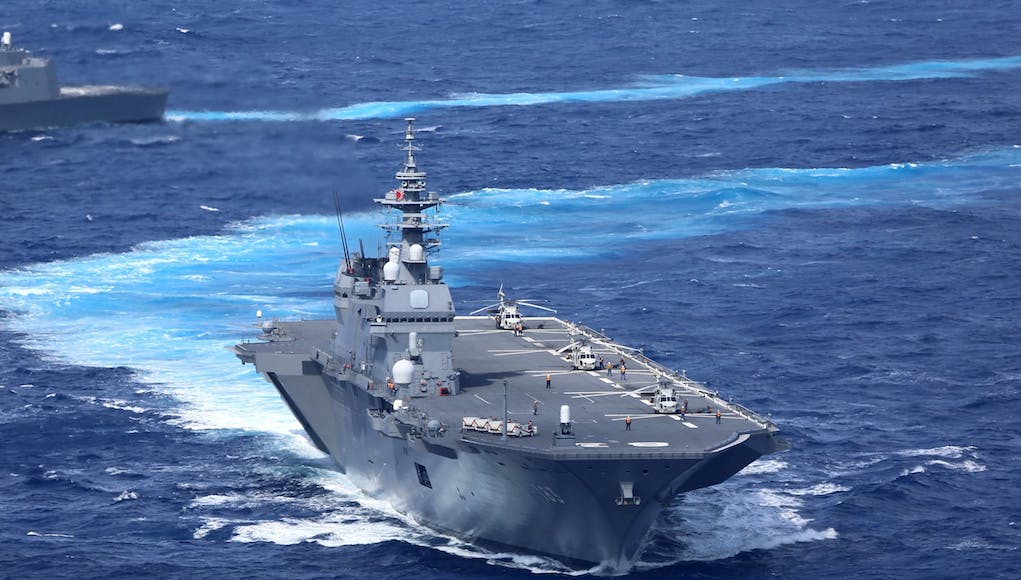 With the North Koreans claiming they have the technology to deploy a hydrogen bomb, and among other concerns, the Japanese Prime Minister Shinzo Abe has put in a a request of 5.2 trillion Yen or $48 billion dollars for 2018 which includes defensive measures including missile protection technology.

China has already signalled that it is unhappy with Japan, and worries this could alter the balance of power in the region, and inaugurate a new emboldened Japan which would act in a more ‘offensive posture’ in the region.

There has also been speculation in Japanese defence policy circles of whether it should be able to acquire a pre-emptive strike capability, as a deterrence against future North Korean aggression, and if necessary strike North Korea before it strikes Japan first.

The increases in defence spending, the speculation as to whether Japan should adopt a pre-emptive strike posture is all part of a wider programme of re-militarisation.  The Japanese Prime Minister Shinzo Abe for quite some time has wanted Japan to become a major player in world affairs. However, its Constitution has remained pacifist in orientation.

Japan has already undergone a naval build up with the construction of its newest helicopter carrier, Kaga has been deployed in reaction to the troubles in the South China Sea.  It represents an increase in Japanese maritime strength with its sister ship Izumo.

Although these ships are technically called helicopter carriers, these are essentially aircraft carriers but nonetheless does signal a shift in Japanese maritime policy, in recognising it may have to assume a more ‘offensive posture’ in future to protect Japanese security interests.

Furthermore, in the realm of international politics, it testifies to the assumptions laid out by Mearheimer, (2001) in The Tragedy of Great Power Politics, which highlights that states are not interested in pursuing policies that protect the status quo and uphold the balance of power, and therefore pursue policies that expand their perceived security interests, even at the risk of conflict with other powers.

We are witnessing a troubling geopolitical landscape in the Asia Pacific, with the North Korean state pursuing an active missile programme, the Japanese rearming with defensive anti missile technologies, equipping its maritime fleet with state of the art helicopter carriers which could be refitted to be used as aircraft carriers if necessary; and now actively discussing the possibility of pursuing a pre-emptive strike against North Korea when the time comes.

My concern, is that although Japan in my opinion is only acting in self-interest, and in a rational, calculated manner in which to preserve its sovereignty and national interest, other actors including North Korea, and China may perceive this as an act of belligerence and signalling a new arms race.

China’s maritime capabilities are growing each day, with the launch earlier this year of its first domestic aircraft carrier thereby, bringing its aircraft carrier fleet to two, with new frigates, destroyers and Chinese Coast Guard cutters which could be reequipped as frigates during the war.

The military procurements and actions by the states in the South East Asia region, and beyond speaks volumes, and attests to Japan’s growing concerns over its territorial integrity, survivability, and also its sovereignty in its maritime borders.

The prospects of a remillitarised Japan may mean that other states may follow in its footsteps.  While this article does not talk about the United States as it is dedicated more to Japan’s remilitarisation, it is no mistaken that under the Trump administration we are witnessing a naval buildup, and increases in defence spending taking overall U.S. defence spending to over $600 billion.

In summary, Japan’s remilitarisation may be the start of a new naval arms race, which has the potential to spark greater conflict and could potential be a causal factor in a new war, if one occurs.  The flashpoints being either actions by North Korea in its missile launches, or the territorial disagreements in the South China Sea by Japan and its regional neighbours.

Whatever the case, there is a shift in states not pursuing a defensive posture and instead embracing what Mearsheimer calls “offensive realism” in his book.

Japan is under real threat. Less from NK (despite the current situation) but from China which is building the most powerful modern navy in the world (US apart and not as competent as RN yet). Given China’s actions in the SCS and that they are still technically at war with Russia they are surrounded with nothing but the Pacific and 70+ Chinese subs to ‘discourage’ trade. Whilst Russia / Japan relations have been getting better this weeks announcement of Russia / China being the world’s new joint peacekeeping force, memories of the WW2 blockade will be playing hard on minds… Read more »

Always a curious approach in these sort of writings. Japan might stimulate an arms race. However the reality is that China and North Korea have already have already done that. Japan is now not in the position not to respond what with potential nuclear armed missiles flying over its territory. The hypocrisy of China to it developing defensive weapons while it foes too little to stopping Noth Koreas development of offensive weapons is sickening and says all we need to know about Japan’s scarily and increasingly so Vulnerable position. A sad proof that going out of your way not to… Read more »

It’s very odd to simultaneously talk of Japan starting a new arms race whilst characterizing all of the evidence provided for this in the context of responding to aggressive behavior or new military capabilities of other, hostile states. Japan’s increasing militarization is part of a wider regional response to China’s massive military buildup, aggressive behavior and attitude that “might makes right”.

To describe Japan as starting an arms race is laughable. They spend 1% of GDP on defence. I only have one niggle with the Japanese Navy. They should have copied the 1970’s RN and told everyone they were ‘Through deck cruisers’ not aircraft carriers.

Almost but their linguistic sleight of hand was Helicopter Destroyer. Yet another accomplishment in misleading procurement.

It’s amazing what you have to do to persuade politicians to do the right thing.

If you look closely at the equipment of the Japanese armed forces, you’ll notice that they are entirely defensive in nature. There are no bombers, no cruise missiles, no strike carriers, no nuclear weapons. Nothing at all offensive. I could go on. While It is true that Shinzo Abe, in particular, favours a shift to a more assertive posture, I really can’t equate that to starting an arms race. Japan has had a strong military for a long time. It can effectively defend the country from China and North Korea. I don’t see the slightest thing wrong with that. In… Read more »